However, very quickly, buyers activated and bought out this fall, as a result of which the price of the first cryptocurrency rose by 20%. A similar situation happened with altcoins. During these events, Bitcoin’s dominance rose again to almost 47%.

This suggests that altcoins fell relative to Bitcoin over the course of a day. Therefore, we decided to take a look at the chart of the largest altcoin – Ethereum. Let’s take a look and figure out if there is a chance of new growth for this coin. 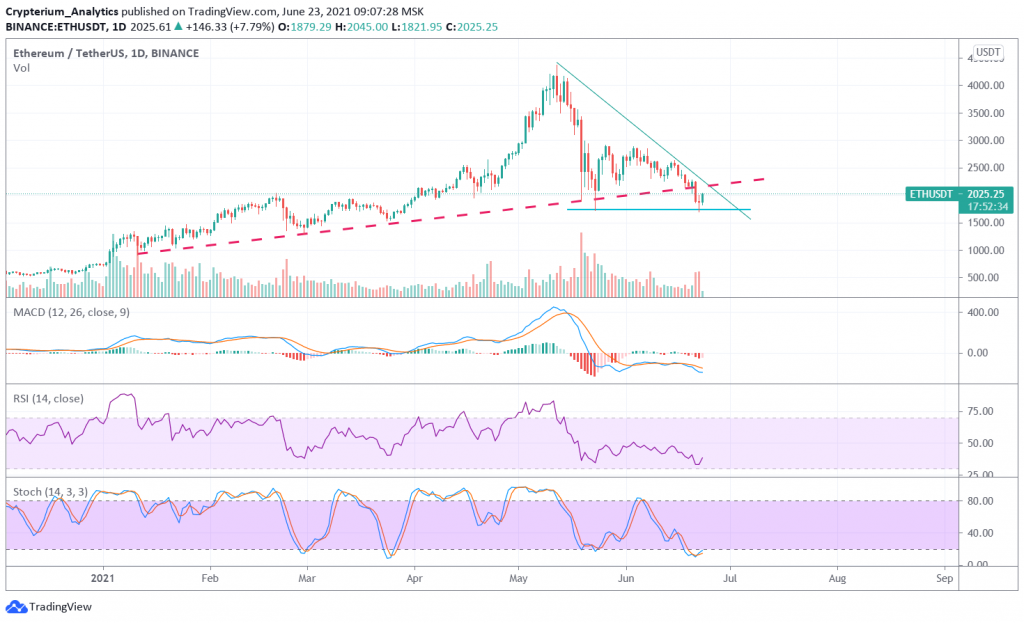 The Ethereum price has already dropped 53% from its high in early May, at around $4,372. The fall was almost sheer and the buyers were buying it very weakly. Over the past 3 weeks, the chart has consolidated in the $2,200 – $2,800 range. During the fall on Monday, the coin dropped below $2,000 and the daily candle closed at $1,885. As a result, the price broke the uptrend from top to bottom and consolidated below it.

Yesterday the price continued its decline and fell to $1,700. At this moment, buyers became more active and were able to quickly push the price back. Moreover, the chart has already moved up 20% from the bottom.

If we look at this picture more broadly, we can note that the chart has formed a large descending triangle, within which the price moves. The lower limit is the $1,700 level. This is where the chart came in during its strong falls in recent times. It is also clear that Ethereum is pushing towards this lower boundary.

Indicators don’t provide a clear picture. MACD is stuck at one level, RSI also has no obvious dynamics, Stochastic fell below the oversold line. Ethereum’s fundamentals are also weak at the moment. The transition to the PoS algorithm is not expected until early 2022 and no major updates are expected at the moment.

All these factors indicate that the chart is currently volatile and rather weak. Based on this, we think that the price of ETH could come in the $1,200 – $1,400 range in the coming weeks. But before that, a small rebound to the $2,200 – $2,300 area is likely. This is an increase of about 10% – 15% of the current values. You can buy ETH instantly and make a quick profit.