Bitcoin has set a new local high at $59,500. However, this cannot be called confident growth because the uncertainty is clearly visible on the chart. Such growth can turn into a fall almost instantly. The situation is different with altcoins. Many of them have lagged behind Bitcoin in terms of growth in the past 2 weeks. Now the situation has begun to change.

Ethereum has already grown by 5% over the past day, which is 2.5 times more than Bitcoin. Therefore, let’s take a look at the Ethereum chart and try to figure out in which direction the price can go in the near future: 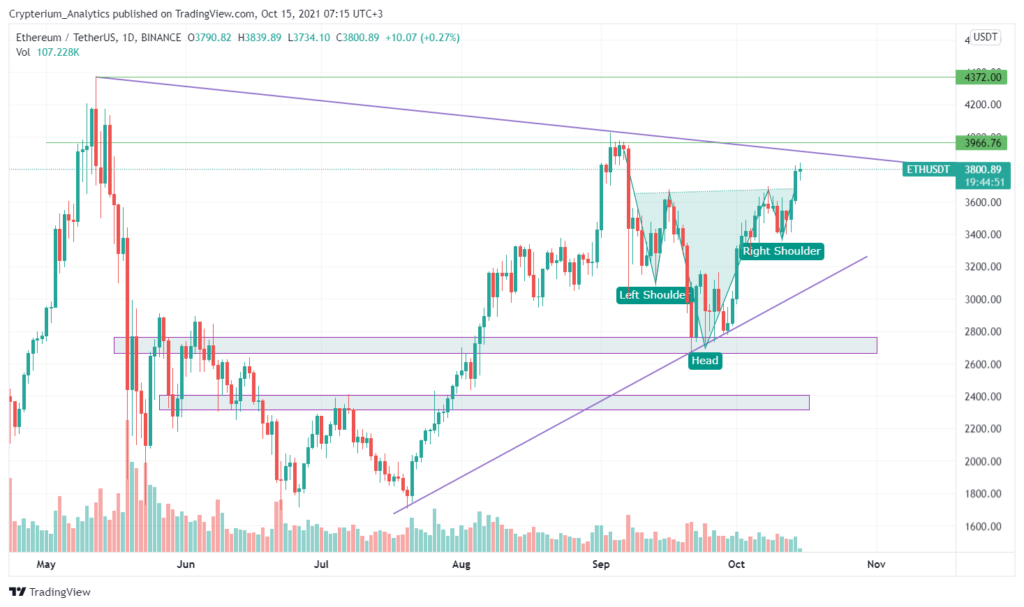 The Ethereum chart has shown significant gains since September 29 and is up by nearly 40% or $1,000 over that time. This is an indicator of an active reaction from buyers. The ETH chart looks strong and still maintains an uptrend.

At the same time, a large inverted head and shoulders pattern has appeared here, which has been forming within a month and a half. This pattern has a large swing and is strong in terms of technical analysis. The price broke through the “neck” border and rushed up just yesterday. However, this is not the development of this formation yet. The target level to which the price may rise in this case is $4,650. Thus, Ethereum has a high probability of setting a new all-time high.

However, before that, buyers need to overcome the strong resistance zone of $3,900 – $4,000. This level is an important psychological mark for market participants. In addition, the border of the downtrend, the upper Bollinger border, and the long protrade at the beginning of September are located here. All this only adds to the importance of this zone. It is possible that the first time ETH will not be able to overcome this level and we can see a rebound with a retest of the $3,700 level.

In general, the situation on the market looks positive now. At first, Bitcoin showed significant growth in October, now altcoins are starting to catch up with it. All this helps to improve the sentiment of market participants. Therefore, in the coming weeks, we can see an approach to historical highs on the charts of many cryptocurrencies.