Over the past 24 hours, there have been no significant changes and news regarding the cryptocurrency market. The Bitcoin price is still below the $57,000 mark and the cryptocurrency itself has a trading volume of around $35 billion per day. At the same time, Bitcoin market dominance has been declining for the third day in a row. This may be due to the market participants turning their attention to other cryptocurrencies while Bitcoin continues its local downtrend.

Let’s take a look at the chart of the largest altcoin in terms of capitalization, Ethereum, which often determines the behavior of the entire market. We’ll try to figure out what direction the ETH price may move to in the near future: 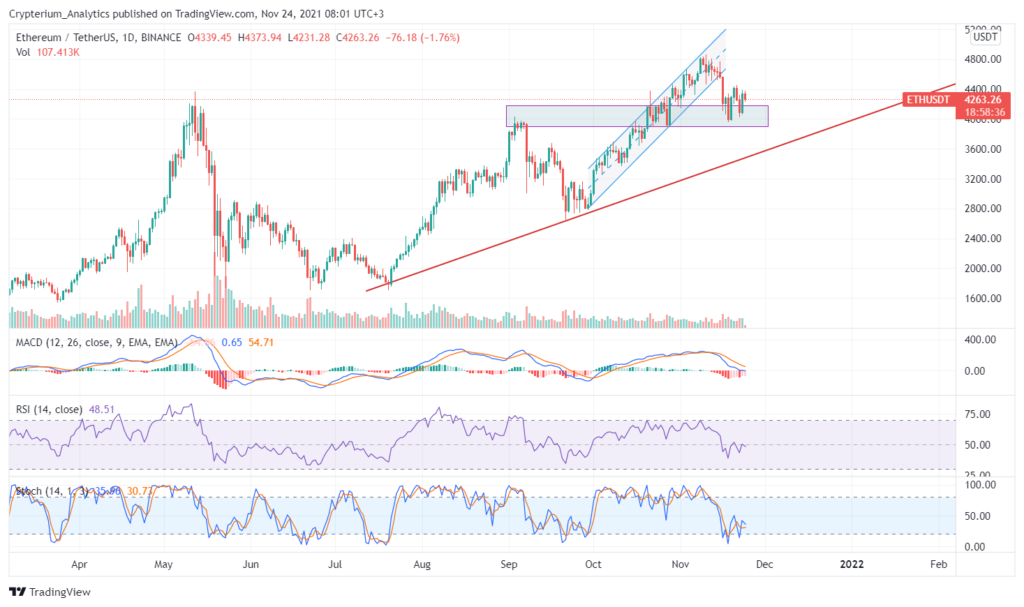 Earlier, we mentioned that Ethereum fell out of a strong upward channel. As a result, its price briefly dropped to $3,960 but right after that buyers pushed the price back up. Since then, Ethereum has not fallen below $4,000, which is the support level that we outlined last week.

The Ethereum price entered the support area of $3,890 – $4,200 and settled here. As of today, the chart has slowed down and turned into a sideways movement. This formation is very similar to what happened during the period from 19 to 29 September 2021, when the ETH price plummeted and remained at the support level of $2,700 for a while. Altogether, this may indicate that the accumulation of positions has already started prior to a new cycle of growth.

The current fall has largely unloaded the indicators. MACD has moved down to the equilibrium point near zero. Ethereum’s moving average lines have begun to converge again, which is a sign of potential reversal.

Before the fall occurred, the RSI had been fluctuating around the upper border for a long time, but could not overcome it. The ongoing drop helped unload this oscillator to a significant extent. Now, the RSI remains around the middle line as it didn’t manage to go back up last week. Stochastic plunged to the oversold zone almost immediately and, currently, it is accumulating here, which means another signal for the local trend reversal.

In addition, a double bottom pattern has formed on the chart, which also represents a reversal formation. If it works out, the price of Ethereum may rise to the level of $4,900 – $5,000 and, thus, set a new all-time high.

If you look at the weekly timeframe, the situation looks good as well. The weekly candlestick dropped to $4,000, thus testing the previous resistance level and historical maximum. This move demonstrates is a classic retest after the level was broken, so Ethereum can only benefit from this scenario, which, most likely, will cause a reversal already this week.