However, the altcoin market has been slow to follow Bitcoin. Most cryptocurrencies showed negative dynamics and even lost in value. Such discrepancies led to the fact that the dominance of Bitcoin grew by another 1% for the third day in a row. Let’s take a look at the Ethereum chart, which is the largest altcoin on the market: 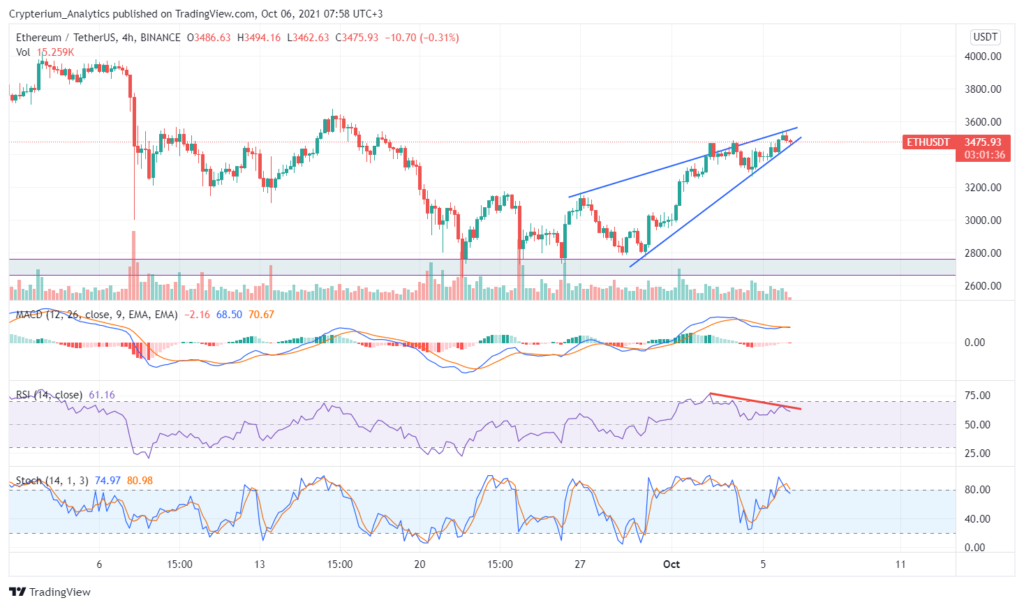 Over the past 7 days, the price of ETH has increased by 26% from $2,800 to $3,550. This growth did not generate much excitement on the market and, as a result, the trading volume remained at the same level. The bulls went their way to $3,480 almost non-stop. Now this movement has decreased a little and almost turned flat.

On the daily timeframe, the picture is still very bullish, but on the lower timeframes, the situation is different. We’ve talked about the formation of a falling wedge earlier. It began to work out at the end of September. The target range, where the price could come as a result of this pattern, was the range of $3,500 – $3,600. The price entered the specified zone yesterday and this formation has completely worked itself out.

However, a rising wedge pattern has been formed on the 4-hour timeframe, which is a reversal. In the coming days, this pattern may begin to work out. This looks like a natural situation for the market since Ethereum needs a correction after a strong growth of almost 30%. The target mark for this pattern is the range of $3,100 – $3,150. There are two peaks at once, that were formed in mid-September just near this level. This amplifies the signal.

Also, bearish divergence appeared on the chart on the RSI and MACD oscillators. Moreover, this discrepancy only increases day by day. This indicates a significant strength of this formation and a high degree of probability of its development.

Thus, several signals at once indicate a possible decline on the chart. It can happen before the end of this week and is likely to become a necessary correction. After that, Ethereum will have all the prerequisites for conquering new highs and establishing a new ATH.