Bitcoin continued to rise for the second day in a row after falling and rose 3.8% yesterday. At the moment, the price is in the range of $39,000 – $40,000, and there is an active struggle between buyers and sellers. All this is happening against the background of a decrease in trading volume, which fell by 15% and amounted to $55 billion over the past day.

The second cryptocurrency in terms of capitalization pulls the entire altcoin market, which is ahead of Bitcoin in terms of growth. This can be judged by the dominance of altcoins in the market, which continues to grow. That is why we want to understand in which direction Ethereum will move. Let’s take a look at its chart: 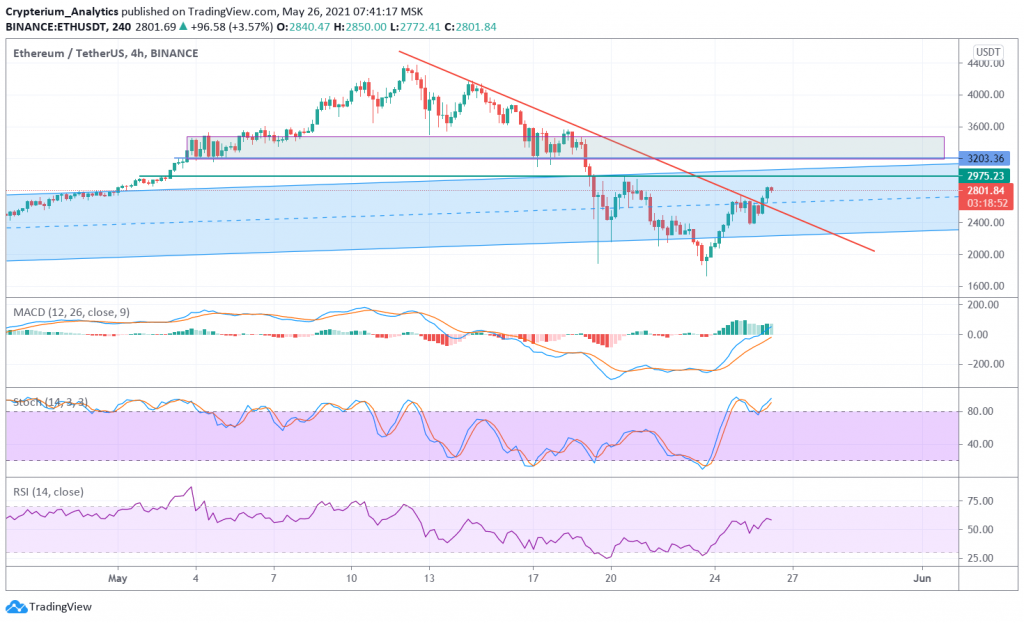 During the fall on Sunday 23rd May, Ethereum’s price bottomed out at $1,728. In just 2 days, the chart has already grown by 65% ​​or by $1,100. This is a very strong indicator for any asset in the market. At the same time, the price went down to the ascending channel and is now moving inside it.

Yesterday the chart stopped for some time near the $2,500 level, but after half a day, it was able to break it. This led to the fact that Ethereum broke through the downtrend from the bottom up and fixed above it. Also, this level was the middle line of the channel. Now the chart is still looking up and is not going to stop.

MACD has gone very low on the 4-hour timeframe during a protracted decline over the past two weeks. However, literally in 2 days, this indicator was able to turn upward and approach the zero mark.

A very sharp rise took place on Stochastic, which broke through the upper border and remained near it. RSI turned less briskly and reached only the middle line, but the chance for further growth continues. Get your first Ethereum with zero fees in Crypterium Wallet.

At the moment, there are no discrepancies between indicators and charts. However, it must be understood that such strong growth cannot last forever. It is likely that the Ethereum chart is currently drawing an inverted head and shoulders pattern, which is a reversal.