Crypto Daily: Ethereum in Sideways Channel and Prepares to Exit it

The entire crypto market showed a 5% correction. Only 4 coins from the Top-100 showed growth over the past day, the rest coins and tokens had a clear downward trend. This happened despite the fact that Microstrategy resumed buying Bitcoin again this week. This time, the company bought 3907 BTC for $177 million.

Just yesterday, we warned about the impending fall in Bitcoin and the entire market. However, it is too early to panic, as there have been no major changes on the BTC chart. Let’s take a look at the Ethereum chart to know how the second-largest cryptocurrency might behave in the near future: 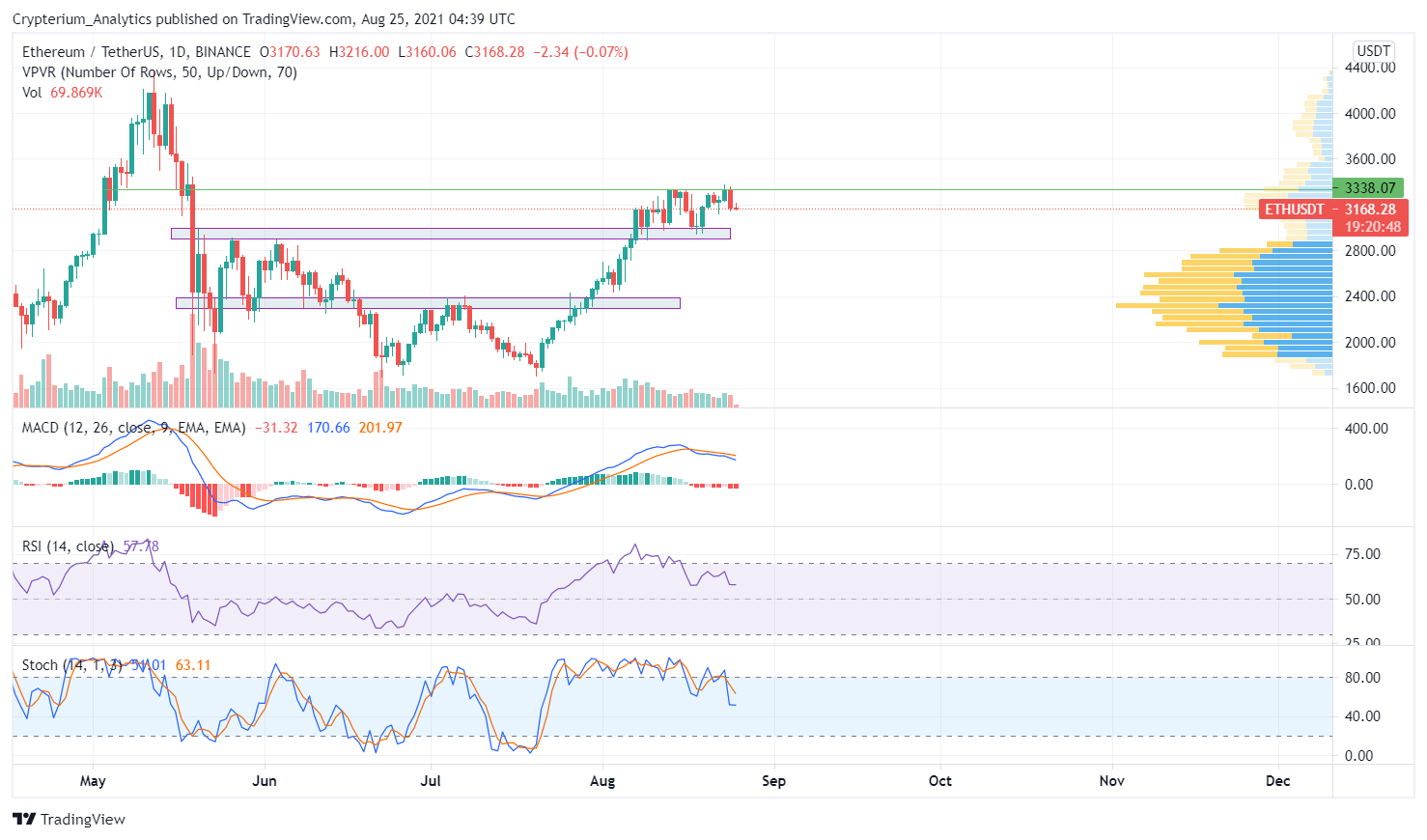 The chart crossed the important psychological mark of $3,000 and consolidated above it 3 weeks ago. All of this happened after a successful network upgrade called the London hardfork. As a result, transaction fees decreased and Ethereum moved to a deflationary model. After this event, which happened on August 5, Ethereum’s movement slowed down and the price turned sideways in the $3,000 – $3,400 range.

It is clearly seen that the $3,400 level is a strong resistance, near which sellers are activating. Also, in the last two weeks, the trading volume has halved, which speaks not in favor of growth. Many market participants are now in uncertainty and are not ready to buy ETH.

The RSI indicator began to gradually decline and has already dropped below the overbought line. A similar situation looms on the Stochastic oscillator. MACD has also moved to a gradual decline over the past two weeks and has a clear downtrend on the daily timeframe. Such movements of indicators lead to the appearance of bearish divergences, indicating a possible decline in the price of an asset.

The current market situation indicates that the Ethereum price is likely to fall. The closest support level is in the $2,900 – $3,000 range. It is in this zone that we expect to see a strong reaction from buyers who will defend this level.

The sideways volume also indicates weak channeling in the $2,800 – $3,200 range. This means that the price can quickly drop to the $2,800 level. With a high probability, a strong struggle will unfold here.

All this suggests that the Ethereum chart may decline by 5% – 10% during the current week. The market situation favors this scenario. This correction will open the way to higher levels, including all the way to ATH. When ready to buy some ETH, do it with zero fees — do not overpay.