Over the past day, the price of Bitcoin has decreased by 2.5% and is now about $66,500. Trading volume and domination remained practically unchanged. The rest of the market followed Bitcoin with a slight decline of around 2%. Only one coin from the Top-10 showed a small positive growth.

In recent days, all attention has shifted to Bitcoin, which has set a new all-time high. Because of this, a small flow of capital into the first cryptocurrency began again. However, while Bitcoin is in a sideways movement, altcoins have a good chance of showing significant growth. Let’s take a look at the largest altcoin on the market, Ethereum, and break down its price chart: 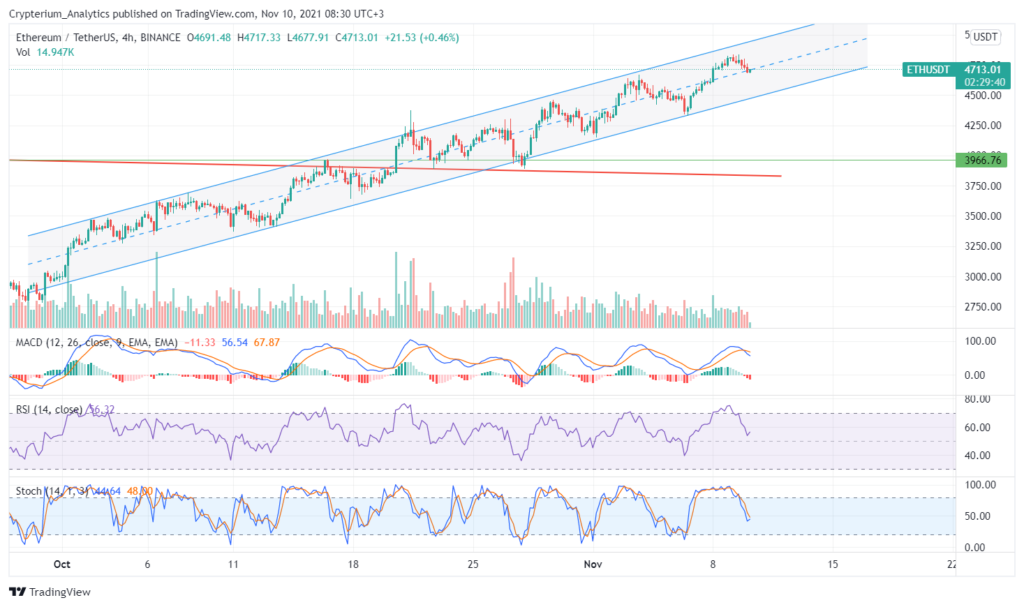 Ethereum continues to move in the upward channel from September 29th. For a month and a half, the largest altcoin has been showing the strongest dynamics. During this time, its price has grown by 63% and is constantly setting new historical highs. The last ATH was set during the last Bitcoin rally on Monday and is at $4,838.

The asset shows a stable trend, as the price moves exactly from the upper to the lower border of the channel and vice versa. At the current moment, Ethereum bounced off the upper border and began a slight decline. The price has already come to the middle line of the channel. You can verify this by opening the 4-hour timeframe. We expect that this movement will continue to the lower border, which is in the $4,500 – $4,550 range.

If you overlay the Bollinger Band indicators, you can see that the chart has also come to the middle line and will most likely continue to move down. Other indicators such as MACD, RSI and Stochastic also show pronounced waves along which Ethereum has been moving during the last month.

This decline will be a correction after reaching new highs. We believe that buyers will be able to maintain the $4,500 level and after that Ethereum will start a new wave of growth. During this rise, the price will set new highs and overcome the most important psychological mark of $5,000. This scenario can happen by the end of this week.