The past 24 hours turned out to be positive for the majority of cryptocurrencies on the market. Bitcoin continued to be around $47,000, while other coins from the Top-10 showed significant growth. First of all, this concerns Ethereum, the price of which increased by 10% per day and set a new local high.

Let’s take a look at the chart of the second-largest cryptocurrency and try to figure out whether this growth will continue in the coming days: 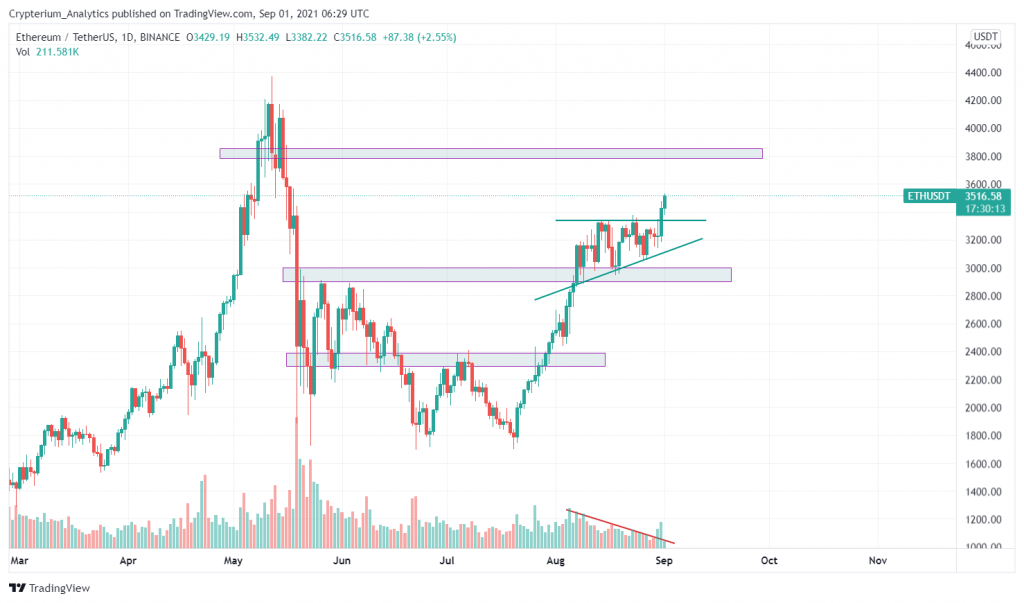 Ethereum has doubled in value over the past 6 weeks. At the end of July, Ethereum dropped to the level of $1,700 and just today crossed the $3,400 mark and rushed up.

For the last 2 weeks, the chart has been moving in the range of $3,000 – $3,350 and has formed a complex structure. A few days ago, it became finally clear that an ascending triangle was formed — a loop signal for further growth. This pattern worked out today.

The chart broke through the strong resistance at $3,400 and went up. Such a strong jump was caused by the triggering of a large number of stop-losses of short traders. As a result, $150 million was liquidated per day and Ethereum took the lead in this indicator over the past 24 hours.

We were concerned about the upcoming decline in trading volumes. Since the beginning of August, they have fallen more than 3 times, which indicated the weakness of the ETH market. However, yesterday’s sharp impulse broke through the downtrend. But, it is now necessary to closely monitor the market, as this could be a false breakout on high volumes from liquidations.

Despite this concern, the chart looks pretty strong. Ethereum has significant potential for further growth. The nearest resistance level will be at the $3,800 level. It is at this level that the next major resistance is located. In addition, the ascending triangle pattern also has a retracement signal that points to $3,800.

The Ethereum growth is associated primarily with the NFT industry this time. NFT trading volumes on the OpenSea marketplace exceeded $3 billion. This is eight times more than in the previous month. Similar dynamics can be observed at other similar marketplaces. The rise in interest in NFT has once again triggered a strong surge in Ethereum’s popularity, just as it did with DeFi a year ago.

In case you are a long-time Ethereum holder, consider making a crypto deposit with up to 4,08% APR. Don’t let crypto volatility stress you out.