Over the past day, the price of Bitcoin has practically not changed at all and stays near $61,000. Trading volume is gradually decreasing and amounted to $35 billion yesterday. At the same time, the rest of the market continues to grow and many altcoins have grown during this time.

Let’s take a closer look at the chart of the first cryptocurrency and try to understand in which direction the price can move further: 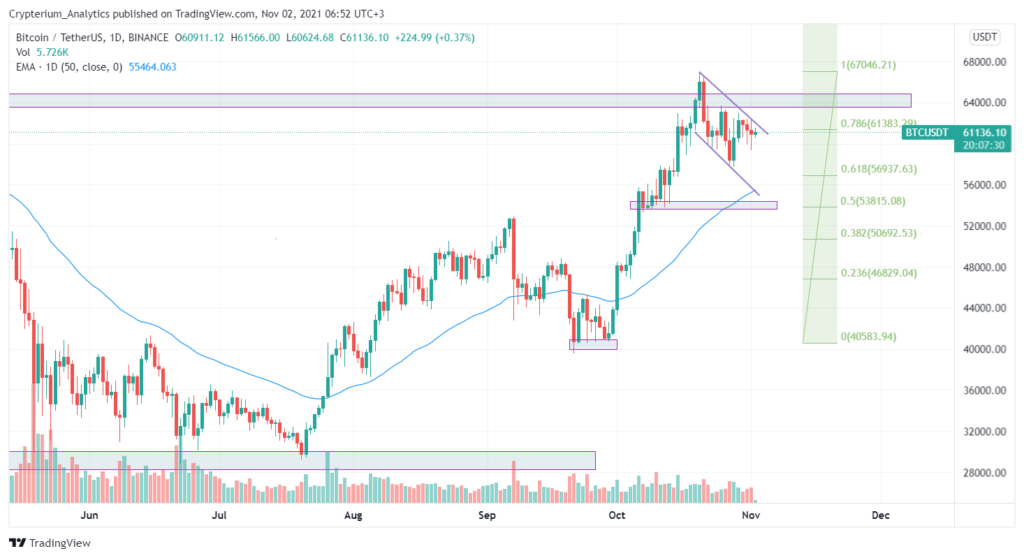 As a result of capital outflow, the price has moved into a local downtrend and is slowly moving down. A descending channel has formed on the chart and the price has been moving along its upper border in the last 3 days. Buyers cannot overcome this zone and turn the price upwards.

This weakness could negatively affect the price of Bitcoin, which could fall in the near future. The largest support level is the $53,500 – $54,500 zone. It is near this level that the price stopped during the recent growth. Moreover, before the May fall in 2021st, buyers actively defended this level and after its breakdown, Bitcoin began its crash. This indicates the importance of this level on the chart.

In addition, the lower border of the descending channel is moving into the $54,000 zone, which just rests against the above-mentioned support level. Besides, this signal is amplified by the exponential moving average line EMA50, which also entered this zone. All this suggests that the price will move to this level. Bitcoin could be down by about 10%, which is a common story on the cryptocurrency market.

At the same time, if you look more globally, you can see that Bitcoin is still in the strongest uptrend. In this case, the current descending channel may be a bullish flag pattern. This means that if this formation fully fulfills itself, then Bitcoin can grow to no less than $80,000. Nevertheless, before that, there is a high probability of falling to the level that we’ve just indicated.

Most likely, Bitcoin will not be allowed to gain a foothold there for a long time and we will see a long shadow on the daily candle. Therefore, it would be logical to place buy limit orders in the $54,000 – $57,000 zone. This reduction will unload indicators and cool the audience’s ardor for cryptocurrencies. As a rule, this has a positive effect on the schedule, which gets rid of “extra passengers” and begins to grow steadily after that.