The Wednesday market recovery saw one of the largest jumps for the year 2022. After trending around 31 on the index for most of Wednesday, the score had seen a sharp upward reversal to 41.

This level puts the market sentiment the closest to greed that it has ever been since the crash. It is also a sharp contrast to the score for last week, as well as the overall score for the month of July, which put the market deep in extreme fear to 16.

The reversal also shows that investors are beginning to return to the market. Accumulation trends are usually started and strengthened during times such as this, contributing to the uptick in cryptocurrency prices all across the space.

On-chain data shows the Bitcoin aSOPR indicator has found resistance at the historical junction between bull and bear markets. As pointed out by an analyst in aCryptoQuantpost, the BTC aSOPR has been rejected from the breakeven mark recently.

The “Spent Output Profit Ratio” (or SOPR in short) is an indicator that shows whether Bitcoin investors are selling at a loss or at a profit right now. The metric works by looking at the on-chain history of each coin being sold to see what price it was last moved at.

If the previous selling price of any coin was less than the current value of BTC, then that particular coin has just been sold at a profit. While if it’s otherwise, then the coin realized some loss.

A modified version of this indicator, the “Adjusted SOPR” (aSOPR), excludes from its calculations all those coins that were held for less than 1 hour before being sold. The benefit of this modification is that it removes all noise from the data that wouldn’t have had any significant implications on the market.

Now, here is a chart that shows the trend in the Bitcoin aSOPR over the past coupe of years:

As you can see in the above graph, the analyst has marked the relevant zones of trend for the Bitcoin aSOPR. It seems like during bull markets, the “1” value of the metric has acted as support, while during bears it has provided resistance.

The significance of this line is that its the breakeven mark for investors as at this value holders are just breaking even on their selling.

Bitcoin price gained pace after there was a clear move above the$24,000 resistance zone. BTC broke the $24,200 level to move further into a positive zone.

Besides, there was a break below a major bullish trend line with support near $24,000 on the hourly chart of the BTC/USD pair. Bitcoin price even traded below the 23.6% Fib retracement level of the upward move from the $22,686 swing low to $24,901 high.

However, the price is now trading above the $23,600 level and the100 hourly simple moving average. On the upside, an immediate resistance is near the $24,200 level. 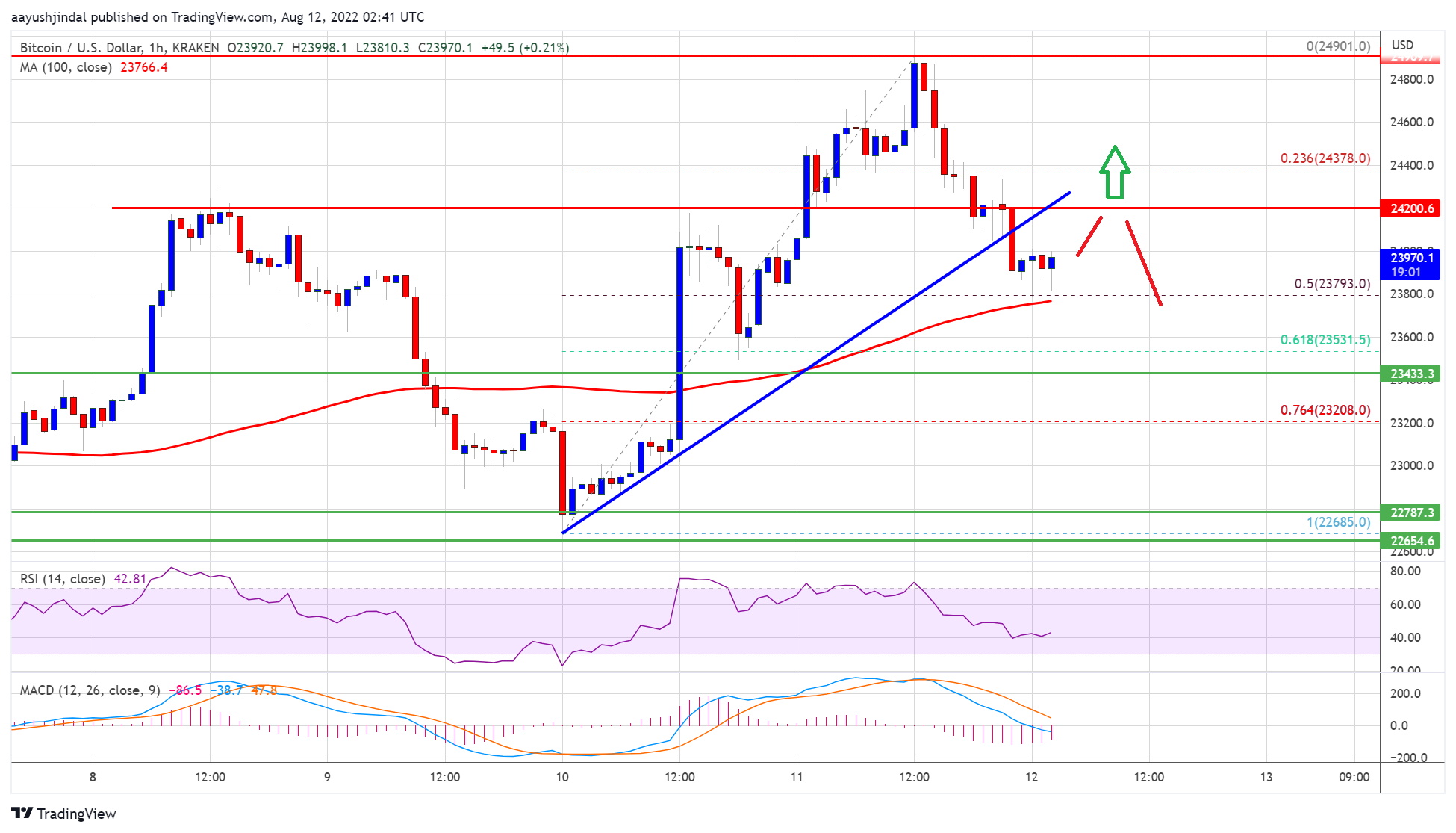