Many of the Top-100 altcoins fell by 8-10%, and even more due to the fall of Bitcoin, which dragged the entire market down.

Let’s take a look at the chart of the first cryptocurrency and try to figure out which direction the price will take in the coming days: 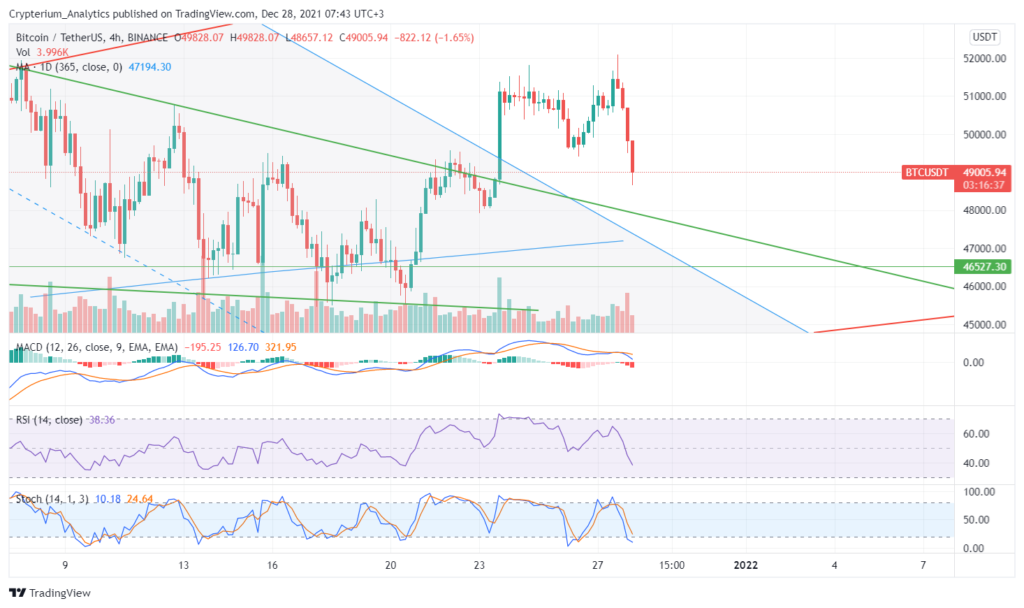 The chart clearly shows a rather strong local decline. First, Bitcoin rose to $52,000 and then plummeted 7% to as low as $48,657. Thus, the BTC price corrected after growing on December 23 and the cryptocurrency bounced back to the same level where it stayed before starting an upward movement.

However, there is still no need to get upset or worried. Bitcoin remains above the downtrend and does not enter the falling wedge, which is very similar to a market manipulation. This can be primarily judged by a sharp increase, immediately followed by the volatility that was practically absent in the market and today’s rather gradual decrease. Therefore, we are not inclined to consider this decline as something negative but as an ordinary price correction.

Moreover, we believe that if Bitcoin falls to the $47,000 – $48,000 area, then it will meet an active buyers’ resistance as this is where both upper boundaries of the large descending channel and the descending wedge pass. Moreover, the annual moving average line came up here. It was MA365 that kept Bitcoin from falling even more drastically in December.

At the same time, if we look at the weekly chart, we will find a bullish engulfing that was formed last week. Previously, we saw similar patterns at the end of July and September. After they occurred, Bitcoin grew by more than 40% each time. Of course, we can not say exactly whether an uptrend will start this time, but such a scenario should not be ruled out.

As of today, there is a high uncertainty that reigns in the market. Many market participants have retired from trading and are enjoying holidays. Therefore, we can see some weak movements in different directions. But as long as Bitcoin remains above $47,000, there is no threat to the uptrend.