Tuesday, September 7th, became “black” for the crypto market. Bitcoin price fell by almost 20% within a few hours and reached $42,840. After that, the chart bounced up 10% in the $46,000 – $47,000 range, where it is now. Against the background of this collapse, the trading volume of the first cryptocurrency increased sharply to $65 billion per day due to the triggering of stop-losses.

Altcoin charts also plummeted significantly and market capitalization decreased by $340 billion. One gets the impression that this market collapse was made artificially in order to drop off “extra passengers”. Long downward shadows on the charts indicate that the collapse was an avalanche and stop-losses only intensified it. As a result, over $3.7 billion was liquidated in just a day. The last time we observed such liquidation values ​​was 4 months ago, in May 2021.

That being said, it’s important to note the fast rebound in most cryptocurrencies. This may indicate that major players entered the market, which triggered limit buy orders. This could have provoked a sharp rebound in charts.

At the same time, important news came from El Salvador yesterday. On September 7th, a law allowing the use of Bitcoin as a means of payment came into force. It also became known that a few days earlier the government acquired 400 BTC. During yesterday’s fall, the head of the country announced that they additionally purchased 150 BTC during the market collapse. According to network rumors, it could cause the collapse.

Let’s take a look at the Ethereum chart today, as the largest capitalized altcoin usually shows the general dynamics on the market: 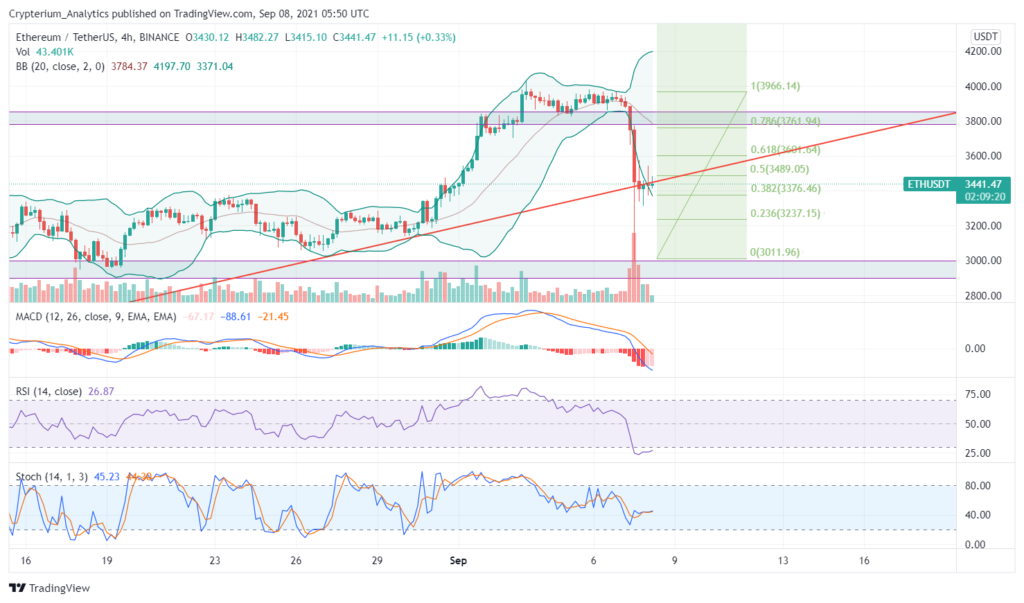 Ethereum price fell to the level of $3,000 yesterday. It is a strong support level, from which the price bounced off and rose to the $3,500 mark. You can see a significant increase in trading volume on the chart and it indicates that many market participants exited the position or were liquidated.

Subsequent candles on the 4-hour timeframe do not show any clear dynamics and turned into a sideways movement. At the same time, they are still near the uptrend line and test it for a breakdown downward. Until this trend is broken, it is too early to talk about a downward reversal.

However, this may not happen immediately. There was a very strong movement on the market and, as a result, there was a lot of uncertainty. We’ve predicted the fall earlier and it has occurred. However, we did not expect this to happen at such a rate. Still, it is now necessary to be out of the market for several days to be convinced of a further uptrend.

To have a better understanding of the upcoming ETH movements you can use free Crypterium AI Price Predictions which can give you a clear, easy-to-understand prediction.