Crypto Daily: Market Crash due to Negative News from the USA

This drop is driven by the news about the U.S. government adopting even more stringent regulations regarding the crypto industry.

The rest of the market also experienced a strong decline. Many altcoins fell by more than 10%, overtaking Bitcoin on this indicator. This is also confirmed by the fact that altcoins have been losing their market share for the last 2 days. Let’s take a look at the chart showing statistics on Ethereum, the second-largest cryptocurrency by capitalization: 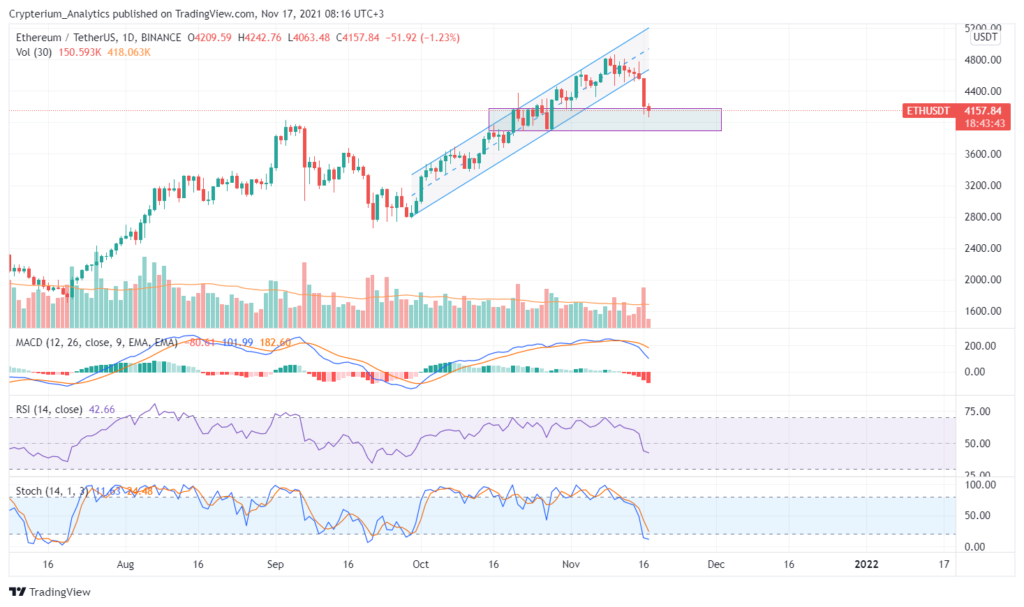 On Monday, Ethereum broke the lower boundary of the upward channel and consolidated below it. This resulted in acceleration of the downward movement and the price plummeted 10% from $4,560 to $4,100 on the very next day. The collapse triggered many stop-losses to be placed, which led to a 25% increase in daily trading volume.

Thus, Ethereum has dipped to an important $3,900 – $4,200 support level. This is where we saw the latest big fight between buyers and sellers. At the same time, it’s still possible that the cryptocurrency will keep going down to the lower border of the specified range, which means a notable decrease by 5-6%.

Absolutely all indicators turned downward and started declining. Stochastic finally entered the oversold zone where it consolidated. RSI reached the midline and then fell below it. Most likely, the ongoing trend may continue and the indicator will drop to an even lower border. With the MACD oscillator, the situation is quite similar. Recently, it has also started a downtrend, and there have been no signals for a reversal yet.

It should be noted that, in the 4-hour timeframe, these indicators have stayed in the oversold zone for a long time. Altogether, this proves that the end of the fall is coming.

We expect to see a further descent to the important psychological $4,000 mark. This is where buyers are expected to react and defend this level. But it could also be that the border will be briefly broken, and then the subsequent quick buyback will take place.

The current market situation is incomplete. Many signs indicate another wave of decline, which may finally knock many market participants out of their positions. As for the manipulative aspect that is normal for the cryptocurrency market, it’s inevitable and has already been seen several times in the past.

The best option now is to wait until the market calms down, starts its sideways movement, and signals for a potential reversal. All the latest drops were caused by negative news, so we do not see anything threatening the uptrend so far.