Over the past day, there have been no significant changes in the cryptocurrency market. Bitcoin continues to hold above $50,000 and most altcoins have also remained at their previous levels. This can be judged by the dominance of the first cryptocurrency, which has stayed around 41% for 3 days in a row. At the same time, trading volume fell by 16% to $32 billion in Bitcoin.

Let’s take a look at the ETH chart today: 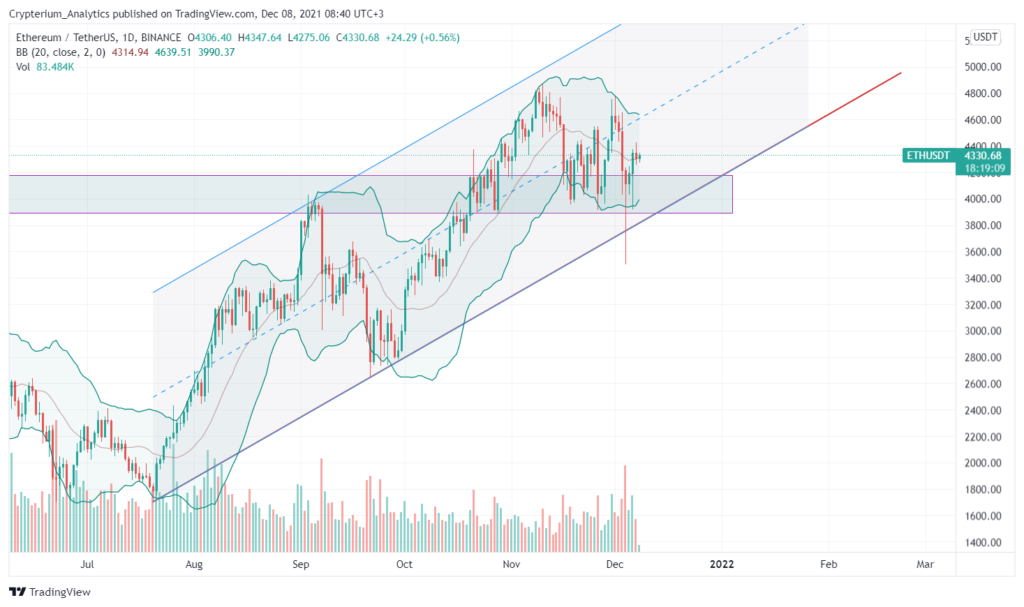 For four and a half months, the Ethereum chart has been moving in a large upward channel. During the general market crash over the weekend, the price broke through the lower border of the channel and dropped to $3,500. However, this move lasted only for a few minutes and buyers were able to get the price back. On that day, the coin lost only 2% of its value, for comparison, Bitcoin lost 8%.

The Ethereum chart returned to the support level in the $3,900 – $4,200 range. For the last three weeks, the chart has been moving around these levels. Current movements on the chart do not make it possible to unambiguously judge the further price movement. High uncertainty overtook the market participants.

However, if you look more closely, it becomes clear that the Ethereum price is at the intermediate point of the upward channel. The general movement of the last days is directed upwards. This means that there is a high probability that Ethereum will reach the middle channel line, which is located near the $4,600 mark.

This signal is amplified by the Bollinger Band indicator. Now the price is near the middle line, where the growth has slowed down. Before that, the chart confidently bounced off the lower border of the indicator. This suggests that the price of ETH can rise quite quickly to the upper Bollinger band. At the moment, it is at around $4,639, which coincides almost perfectly with the middle line of the ascending channel.

According to these signs, we expect Ethereum to rise to $4,600 in the coming days. However, if this does not happen in the next few days, then the chances of growth will diminish significantly. In addition, a reversal candle was formed on the daily chart yesterday, which can also strengthen downward signals.

The current market is still in a state of uncertainty. Many market participants continue to follow the development of events and are in no hurry to enter purchases. Most likely, this situation will last throughout the week, so you need to be extremely careful when working with new positions.