The dominance of the first cryptocurrency continued to decline and now stands at 42.5%.

Let’s take a look at the Bitcoin chart and try to figure out what to expect from the market in the near future: 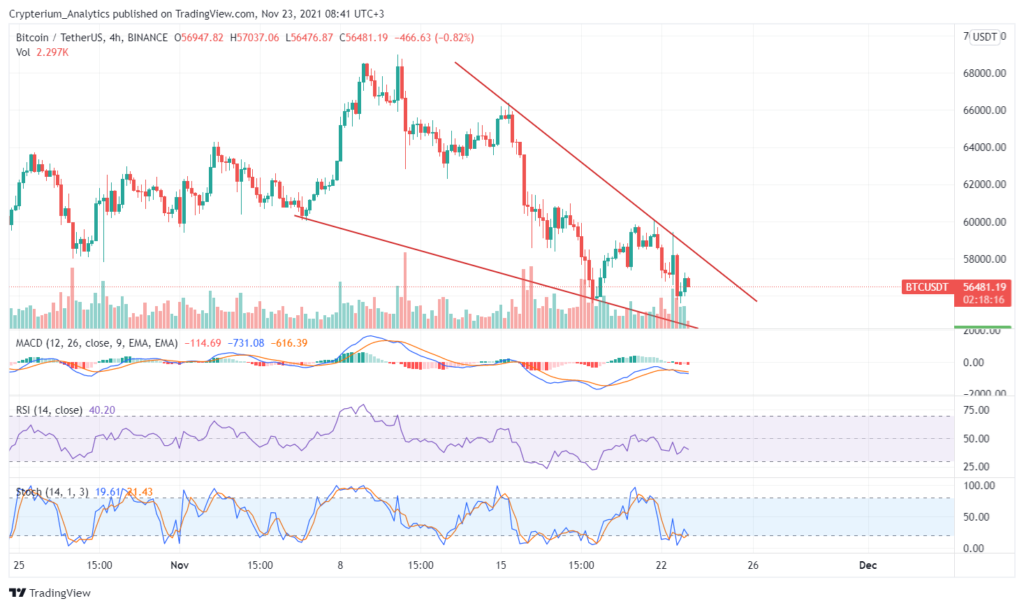 Bitcoin is still moving in a falling wedge. The price reached the upper border again and rolled back down to the middle of the pattern yesterday. At the moment, the chart fell to the level of $55,610 and after that rose by 2%. This indicates a weak reaction from buyers who are in no hurry to buy Bitcoin at current prices. Nevertheless, the “falling wedge” pattern is becoming more and more relevant every day and, therefore, a chart reversal is quite probable.

The current local support is at $55,600 level. The price has bounced up twice from here. We believe that the support zone is in the $54,000 – $55,600 range. Therefore, there is a possibility of a new price decline to $54,000 level. It should be noted that sellers start to give up their positions and soon the initiative can go to buyers.

In addition, two reversal patterns can be formed on the chart at once. The first one is the classic “double bottom”. It is possible that the price has already drawn a second bottom and is starting to move up. Confirmation of this pattern will be the price rise to $60,000.

Another reversal pattern could be an “inverted head and shoulders”. Now the second shoulder is being formed on the chart. This pattern will become relevant if Bitcoin reaches $59,500. In both cases, these formations will mean the price is out of the falling wedge to the top. At the moment, the upper border of the wedge is at $58,500 and is decreasing day by day.

Separately, you can take a look at the indicators. Many of the lows moved into the oversold zone during the November 18th dip and have been trying to reverse upward since then. If we take into account yesterday’s price decline, then convergence is formed on these oscillators, which is a signal for growth.

Thus, Bitcoin has almost exhausted its potential for a fall. At the moment, several reversal signs have been formed at once. Therefore, you can start to enter purchases actively, but take into account a possible slight fall to the $54,000 level.