Yesterday the first cryptocurrency briefly fell to $31,000 and after that, the chart bounced up. Against this background, trading volumes jumped by almost 50% and amounted to $45 billion per day.

A similar situation happened with the altcoins market. Many of them fell at first, and then quickly increased to their previous values. The exception is Solana, which grew by 10% per day and got as close as possible to the Top-10 cryptocurrencies. Let’s take a look at the chart of this coin and try to figure out whether to expect further growth from it: 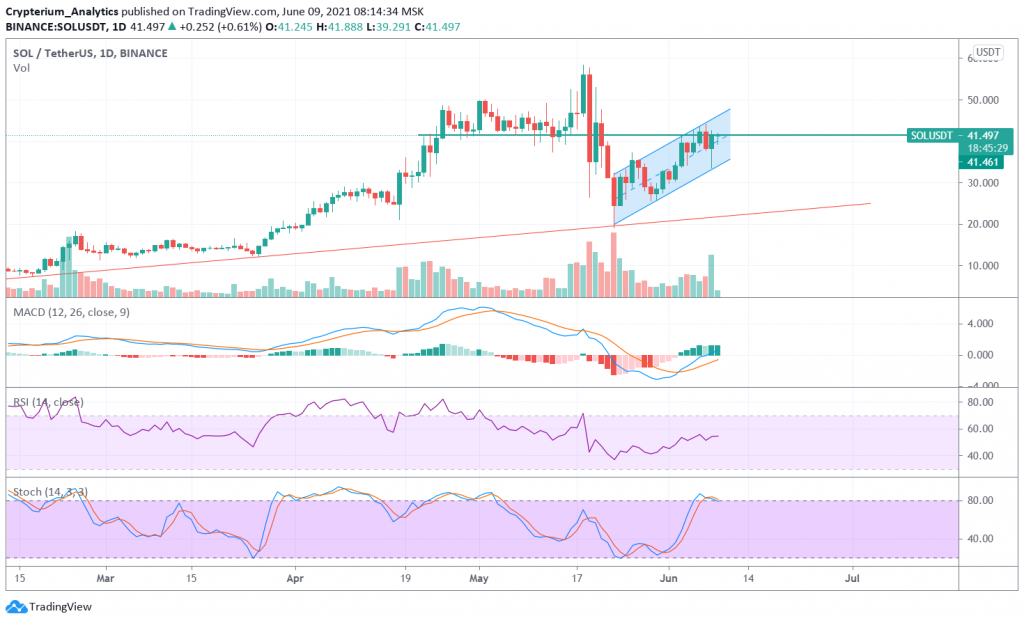 In May, the maximum price to which the chart went up was $55. This was followed by a massive collapse of the entire crypto market and the price of Solana fell by 67%. From the low point of this decline, the chart has already grown by 130% and this is a very strong growth especially in comparison with the rest of the market. The chart has a very strong structure and has formed an upward channel.

Yesterday’s fall had almost no effect on the coin. At first, the chart dropped significantly from $43 to $33, or 23%. However, buyers quickly brought the price back to the $40 level. During these events, the volume of purchases increased significantly, which can be seen in the daily timeframe of the chart. This suggests that Solana has one of the strongest support from market participants at the moment.

Now the chart is hitting resistance, which is in the $42 – $44 range. This is the last major resistance level that was formed from mid-April to mid-May. If the chart breaks through this resistance and consolidates above it, then the price may rise significantly in the short term.

Technical indicators also indicate continued growth and have no discrepancies with the chart. This gives strength to these signals. The RSI has reached only the middle line and has a lot of room for further growth. Stochastic has already broken through the upper border, but as we know, it can stay there for weeks or even months during an uptrend. Moving averages of the MACD indicator crossed the zero mark from top to bottom and is likely to continue to grow further.

In just a few weeks, Solana was able to almost completely recoup the strongest fall in May. At the moment, this cryptocurrency has one of the most chartings on the market and looks like it is going to rise by 30% – 40% from the current levels. This means that in the coming weeks, the price could quickly rise to $55 – $60. Make your first crypto purchase without fees in the Crypterium Wallet.

Many positive fundamentals for the platform also contribute to this. In particular, a hackathon was recently completed, during which many developers presented their solutions for using Solana. In addition, more and more projects are emerging that use Solana as their main development platform. All this contributes to a smooth rise in prices.

We think that soon Solana will be able to set new price records and enter the Top-10 cryptocurrencies in terms of capitalization.