Over the last 24 hours, the Bitcoin price has increased by 14% and gained a foothold firmly above $40,000. Trading volume increased sharply to $36 billion per day. Altcoins also showed an upward trend, but not as spectacular as that of the first cryptocurrency. This can be judged by the Bitcoin dominance, which rose from 42.5% to almost 44% in a day.

Let’s take a closer look at the BTC chart and try to figure out which direction the price will take in the coming days: 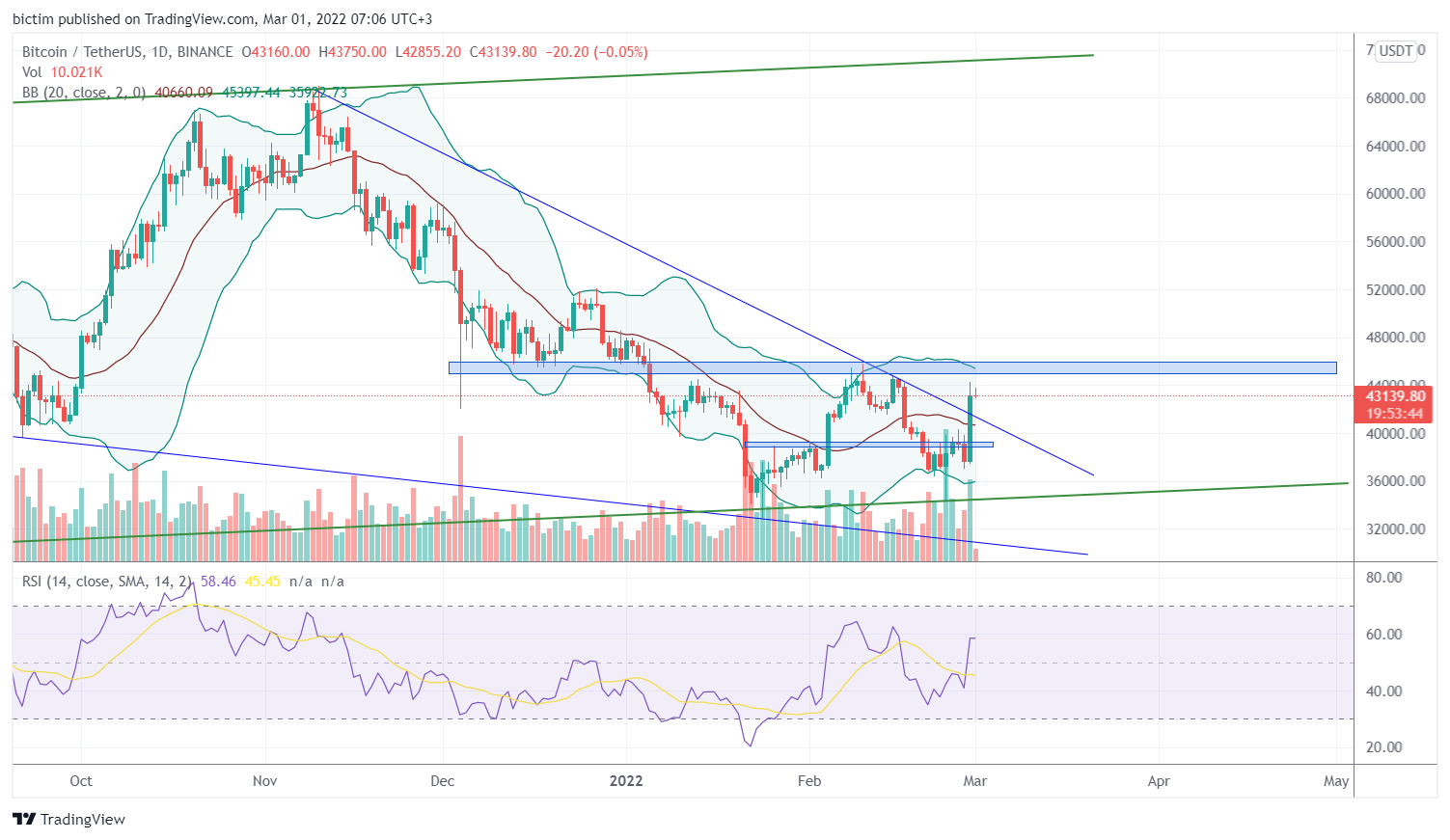 Yesterday, we warned that the $39,000 level would be key for Bitcoin. Eventually, we turned out to be right. After buyers had broken this level, the price started a rapid rise. Bitcoin jumped to $44,225 and then bounced back to the current levels of around $43,000.

It should be noted that yesterday Bitcoin experienced the largest daily growth in a year. The last time such a big increase occurred was on February 8, 2021 following Elon Musk’s tweet in support of Bitcoin.

The most important fact is that the chart broke the global downtrend and consolidated above it. This is a good sign that indicates new capital flowing to crypto. Many market participants turned to virtual assets again due to the tense world situation. They see them as another safe haven option along with gold.

The next significant level is $45,000 – $46,000. Historically, this is a strong resistance zone, which means that we will see a struggle between buyers and sellers around there. The same range is indicated by the upper Bollinger band which confirms the importance of the resistance level and signals high volatility as Bitcoin nears it. Over the past 1.5 months, buyers will try to overcome this level for the 4th time and, as of today, they are more likely to succeed.

Meanwhile, a double bottom pattern appeared on the chart, which is a sign of reversal and further growth. If this figure works out, the price of Bitcoin may soar to the $53,000 – $55,000 area. But note that Bitcoin needs to overcome the $45,000 level so this scenario could become true.

In the last 7 days, the market situation has changed significantly. New money fueled the market causing volatility to increase notably. People are focusing on the crypto market again and thinking of buying them as an opportunity to protect the value of their money from negative world events and inflation. Such reasons are exactly what often signals a new round of growth.