The chart of the first cryptocurrency continued to decline and fell by 8% per day. At the same time, the volume of liquidations is gradually decreasing and amounted to $500 million yesterday. Bitcoin briefly dipped below $40,000 to $39,600.

Other cryptocurrencies showed an even more significant decline. This can be seen in the dominance of Bitcoin, which has been growing over the past 10 days. The largest altcoin, Ethereum, fell by 11% yesterday and consolidated below an important psychological level of $3,000.

Let’s take a look at the ETH chart and try to figure out what to expect from the ETH price in the near future: 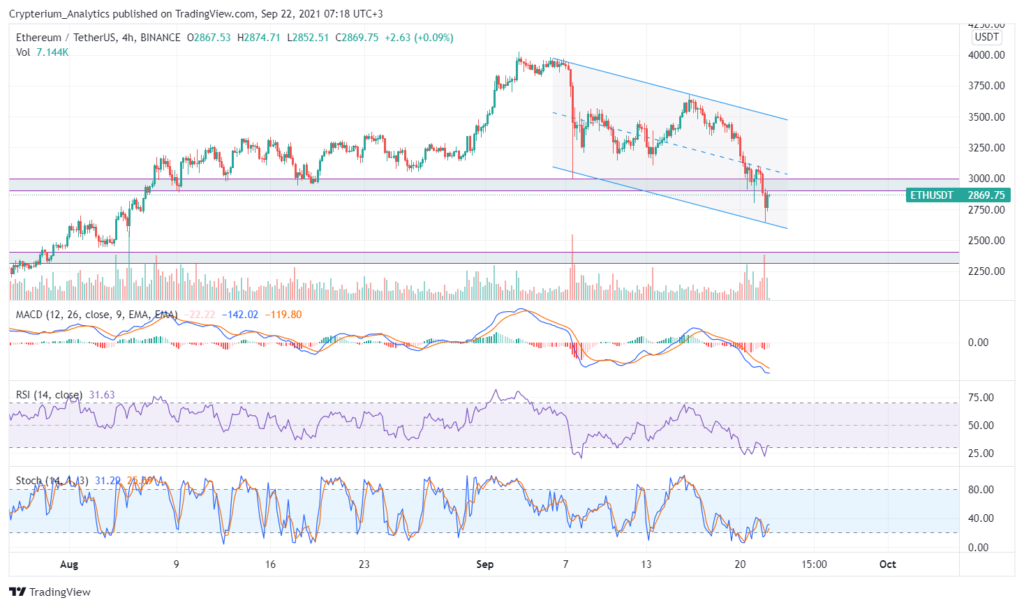 Technically, this asset has moved into a downtrend since the beginning of September and formed a downward channel. As a result of yesterday’s fall, the chart reached the lower border of the channel and pushed off from it. However, Ethereum was unable to overcome the resistance level in the $2,900 – $3,000 range, under which the price went during yesterday’s fall.

At the same time, the trading volume for yesterday amounted to $30 billion. This is almost 2 times compared to the values ​​that we observed a week ago. This indicator suggests that at the current levels a real struggle is unfolding between buyers and sellers.

At the same time, we pay attention to the indicators on the 4-hour timeframe. Stochastic and RSI went into the oversold zone and are trying to reverse at the current moment. Moreover, a small convergence has formed on these oscillators—a signal for a price reversal upward. On the daily timeframe, Stochastic also dropped significantly and went into the oversold zone. At the same time, it is highly likely that it may turn upward in the near future.

Today the price is still moving up to the middle line of the channel. We see a large shadow on yesterday’s daily candlestick below. This shadow indicates buying power. We took all these factors into account and assumed that the price could return to the $3,000 mark in the next few days.

However, the current situation in the cryptocurrency market is very precarious. Any insignificant news could lead to a large drop, which could be exacerbated by a large volume of liquidations. Therefore, in such cases, it is best to work with a short stop loss.