The social network has introduced the ability to accept donations for content creators in Bitcoins using the Lightning Network. At the moment, this feature is only available to iOS owners, but in the coming weeks, this update will also be available to Android.

All this caused a 5% jump in Bitcoin and raised a high excitement around this news. However, it is important to note that the rest of the cryptocurrency market practically did not react to this event in any way. Most altcoins have not changed in price, which may indicate a wait-and-see position of market participants.

Let’s take a look at the Bitcoin chart and see how this affected it: 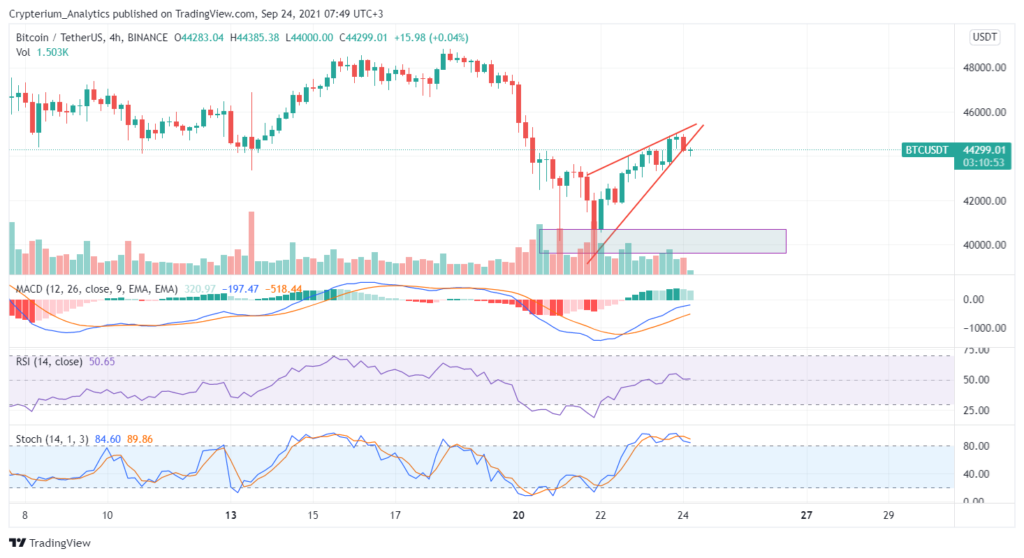 On Tuesday, September 21, the Bitcoin chart dropped to $39,600. Buyers were quickly able to bring the price back above $41,000 and the price has started to rise since then. During this time, Bitcoin has already grown by 13.5% and is trying to gain a foothold above $44,500.

During this rally, a rising wedge pattern was formed on the chart, which is a reversal. It can be seen that on the 4-hour timeframe, the price has already tested the lower border and consolidated below. Therefore, there is now a high probability of a fall. This pattern also appeared at the beginning of the current week. After that, the price dropped by 20%.

We note the fact that the trading volume decreases during the current growth. This suggests that most market participants do not believe in the continuation of the trend. Many of them exited the market as a result of massive liquidations earlier this week and are now just eyeing new positions.

The Stochastic indicator returned to the upper border in 3 days and consolidated significantly above it. In addition, both tops are at the same level, while the tops on the chart set local highs. This indicates divergence and is a bearish signal.

MACD has almost completely won back its fall and returned to zero levels. At the same time, the moving averages have slowed down and may turn down in the near future.

All these signs indicate that we are now facing a slight decline to the $41,000 area. This will unload the chart and reset long traders. With a high degree of probability, this can happen during the weekend, since the activity of market participants at this time is significantly reduced.