Last week, Bitcoin fell by 2% and now sits at just below $46,000. At the same time, altcoins experienced significant growth. Many assets grew by tens of percent, thus notably increasing their capitalization. This was also triggered by some positive news that came to the crypto market.

Last week’s most important event was the hacker attack on the Ethereum-based Ronin sidechain. The intruder managed to access 173,600 ETH and $25 million in USDC. No one has been aware of this attack for 5 days, and only after that the project team found that the hacker had withdrawn $625 million. This is the biggest attack in the DeFi industry and the second biggest attack in the crypto space after the notorious Mt.Gox crash. The Ronin team has already promised to refund all affected users, but what this process will be like is still unknown.

MicroStrategy reminded of itself once again. This time, the company announced that they took out a $205 million loan secured by their own Bitcoins from Silvergate Bank. Thus, MicroStrategy will use the received money to buy Bitcoin. The founder of the company, Michael Saylor, said that the market was not yet ready for bonds backed by Bitcoin. Meanwhile, he believes that such a financial instrument will become understandable and publicly available in the future, so MicroStrategy took out a loan to increase its positions and profit potential again. Recall that the last time Microstrategy bought Bitcoin was in February 2022.

It became known about another major investment round. This time around, Blockchain.com has raised an undisclosed amount of funding at a $14 billion valuation. Moreover, last week, it became known that they acquired the Altonomy OTC platform. Thus, Blockchain.com wants to enter the Asian market and will add about 50 cryptocurrencies to its current 5 coins available on the platform. In addition, a part of the received money will be used to create its own NFT marketplace, which the company has been working on for more than a year now.

The 19 millionth anniversary coin was mined on the Bitcoin network, at block height 730,002. Thus, at the moment, 90% of all bitcoins have already been mined. Following this event, VanEck stated that Bitcoin could reach the price range of $1.3 million to $4.8 million per coin if it became the world’s reserve currency.

Another notable news was the release of the algorithmic stablecoin USDB on the Fantom network. The established company Balance will become the issuer of this new decentralized money. You can issue USDB by burning FHM tokens. Binding the stablecoin to $1 will be implemented at the expense of users who will use arbitrage opportunities.

All these events had a positive impact on the crypto industry, except for the news about the hacker attack. Let’s take a look at how this affected the chart of the first cryptocurrency and try to predict what direction the price will take further: 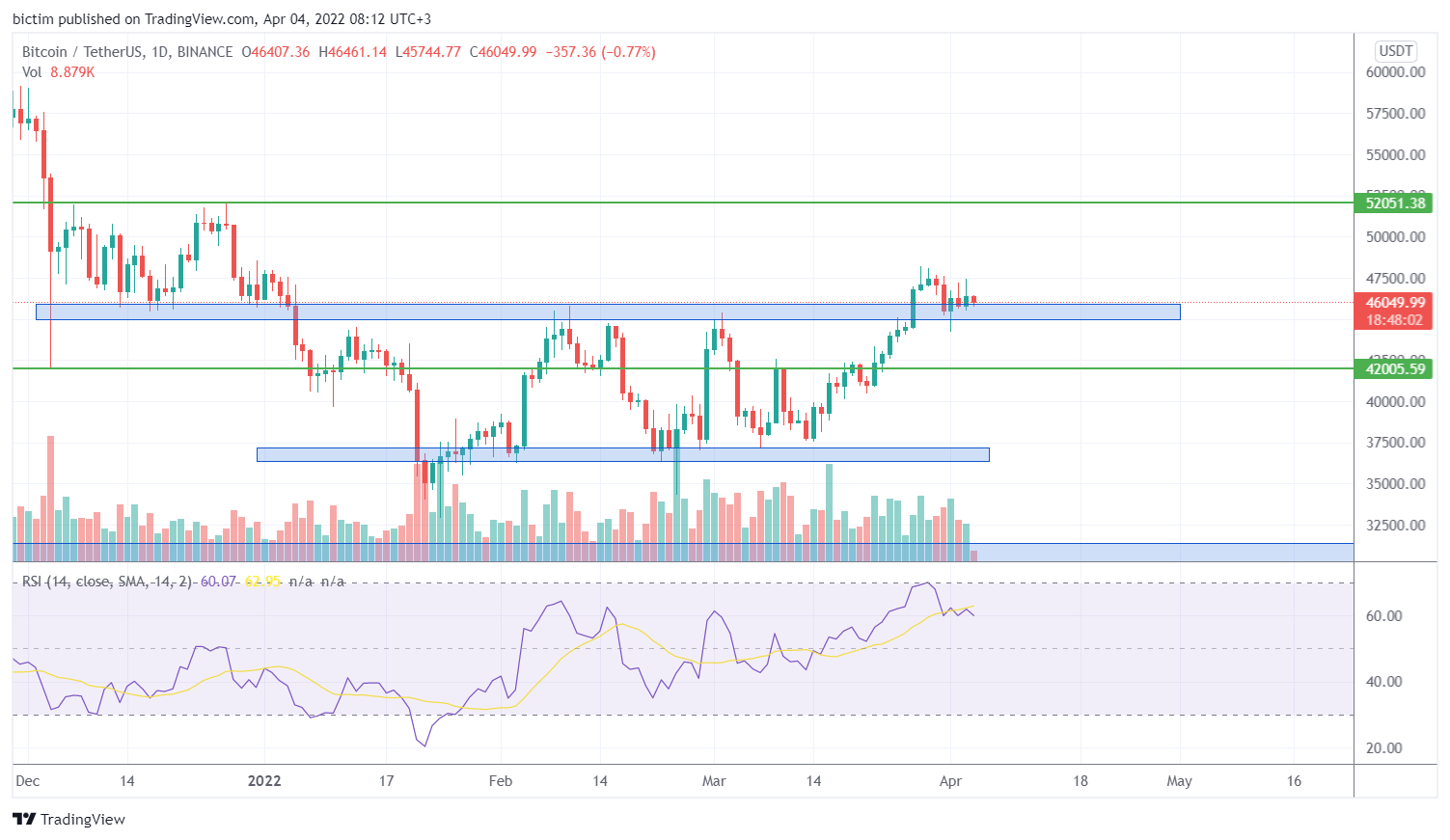 For the past 4 days, Bitcoin has been fluctuating near the $46,000 support level. Buyers do not let the price go lower. However, the weekly candle closed and, as a rule, this signals a reversal. Therefore, now, it is difficult to say what direction the price will take further. We need to wait at least 1-2 days, and then the situation will become clearer.

It should also be noted that the Bitcoin dominance has been falling during the last week and has already declined from 43.3% to 41.4%. This indicates that the altcoin season is now gaining momentum and the capital is flowing to them. Two weeks ago, we talked about this scenario and it has begun to turn into reality with a high chance of continuing in the near future.