Over the past week, the price of Bitcoin has decreased by 3% and still remains around $30,000. The altcoin market dropped even more during the same time. This can be judged by the dominance of Bitcoin in the market, which grew by 1.5% in a week.

The main event of the past week was the relaunch of the Terra network. The community approved a refund plan from project founder Do Kwon last Thursday. And already on Saturday, the Terra 2.0 network was launched. Everyone who held Luna and UST before the attack and also after the attack received an airdrop in new Luna coins in various ratios. The airdrop was supported by many of the largest exchanges that have already launched trading on this coin. The old network will also continue to exist with the addition of the word Classic.

Another notable news came from the Ethereum network. Thus, the Beacon Chain test chain underwent a reorganization of 7 blocks within 86 seconds. Such a strong discrepancy has not yet been observed. This caused a backlash from the crypto community and added to concerns about the transition to Ethereum 2.0. However, the main developers assured that this error is not related to the network architecture, but to the fact that the network nodes have not updated their software.

Against the backdrop of the continued fall in the price of Bitcoin, many miners began to turn off their equipment due to unprofitability. This led to a reduction in network complexity by 4.33% at once. This figure was the highest since August 2021. The profitability of mining continues to plummet, and this can provoke not only a decrease in complexity, but also a more serious drop in the hashrate of the Bitcoin network.

It became known that the Solana blockchain had another drawback. The internal clock of the blockchain is already 30 minutes behind real time. This is due to the longer creation of blocks. In turn, the creation of blocks is delayed due to the high load on the network. Cheap and fast transactions are difficult and the network experiences congestion from time to time and stops.

The popular move-to-earn project Stepn experienced a strong decline last week. This was due to the news, according to which the project closes access for users from mainland China. According to various estimates, the share of Chinese users in the project ranged from 10% to 20%. Recall that the cost of the project coin decreased from $4 in early May to $0.80 last week.

Let’s take a look at the Bitcoin chart and try to figure out what to expect from it in the coming week: 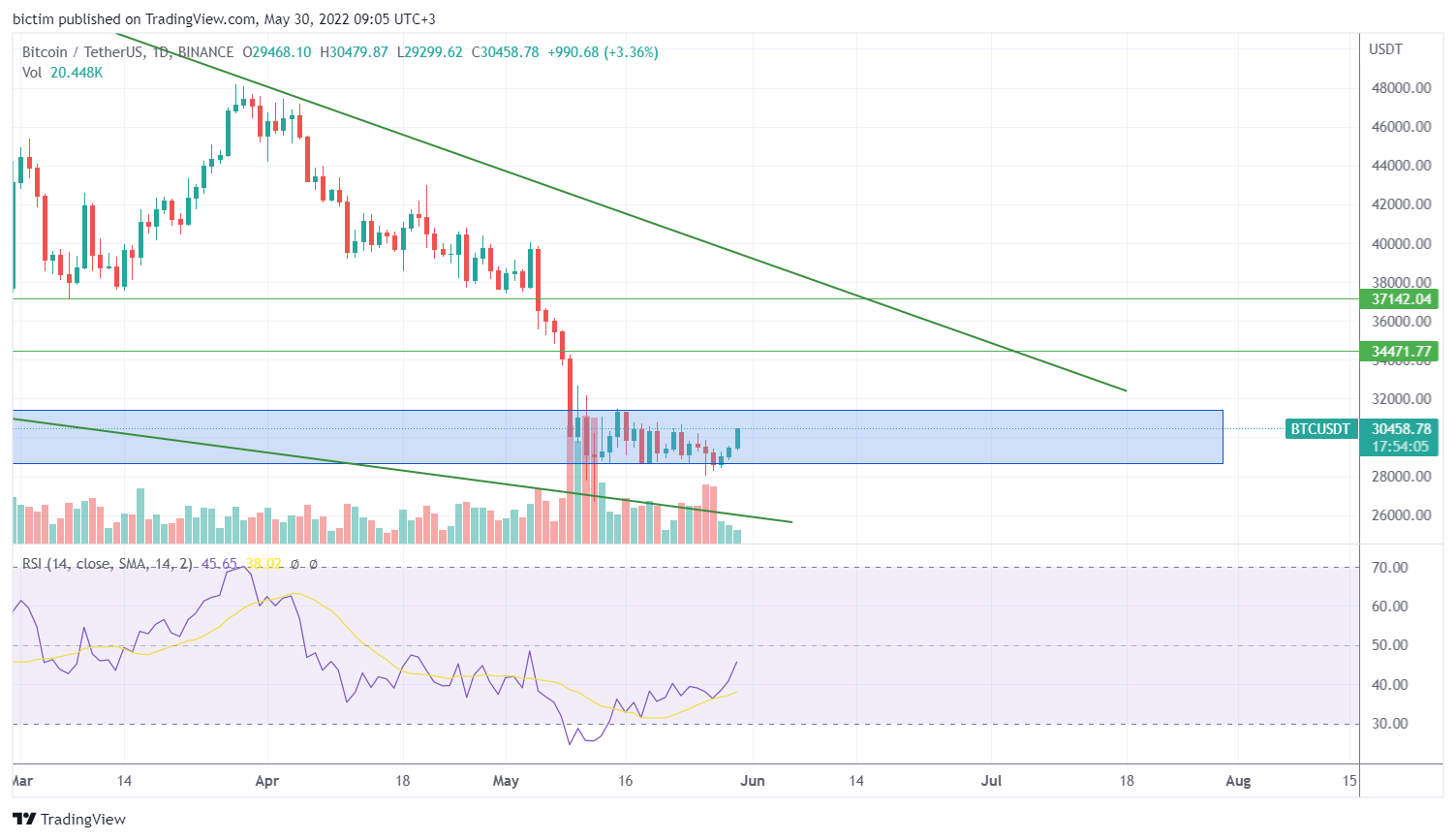 The chart continues to move in a narrow sideways channel around $30,000. At the end of last week, Bitcoin made attempts to break through the lower boundary of the channel at $28,800. At this moment, the bulls became active and quickly returned the price back to the channel. Over the weekend, the price finally reversed and has been showing growth for the third day in a row.

At the same time, it is necessary to pay attention to trading volumes. During the breakdown of the lower border of the side channel, trading increased significantly and we saw an intraday confrontation between bulls and bears. However, with growth, we do not see an increase in the volume of trades. This is suggestive of a bull trap.

Moreover, this week the monthly candle closes, and the summer season opens, which is low volatile. Traditionally, at this time there is a decrease in activity in the market. All this suggests that the growth of recent days is a bait for market participants.

Therefore, in the current week, we expect to see a final downward reversal with a climax. This will lead to the collapse of the altcoin market. The cancellation of this scenario will be the closing of the monthly candle on Tuesday above $35,000.