Most of the week, the market experienced many negative events, which was caused by a lot of news.

China continued to tighten regulations for the cryptocurrency industry. This time, the government has banned all major news media and users have lost access to them. In addition, a large number of mining providers’ IP addresses were blocked. As a result, miners connected to ViaBTC, F2Pool, BinancePool faced connection problems and the mining process ceased. Because of this, the total hashrate of the Bitcoin network has dropped by almost 20%.

The next day, the cryptocurrency market saw an even more severe downturn. This was due to the latest news about a new strain of coronavirus that was found in South Africa. Bitcoin fell by 7%, while the rest of the market plunged by 10% or more. The collapse triggered liquidations amounting to $800 million in total. Separately it should be noted that this news had a negative impact on the stock market as well, leading to a serious decline.

The government of El Salvador benefited from the decrease once again. The country’s president, Nyib Bukele, tweeted that the government fund took advantage of Bitcoin’s decline and acquired 100 BTC additionally. Thus at the moment, there are 1220 Bitcoins in the storage of El Salvador.

At the same time, there was a positive report on Bitcoin, which was compiled by the Blockdata company. It says that the average value transferred for the quarter was nearly $500 billion. By this indicator, Bitcoin is almost 2 times higher than PayPal with its transaction volume averaging $300 million. The two remaining largest payment companies, Mastercard and Visa, are worth $1.8 trillion and $3.2 trillion, respectively. This suggests that the spread and use of Bitcoin may soon reach the same levels, given the increasing popularity of BTC and other cryptocurrencies.

There are also ongoing discussions about increasing the throughput of the Ethereum blockchain. Vitalik Buterin presented a new roadmap for the second-level solutions based on Rollups technology. This will include reducing the amount of data in one block and gradually switching to sharding. The proposal has already been published and the voting process for the update is about to start. The last major update of the Ethereum network that implied burning some of the fees took place in August 2021. Since then, 1 million ETH worth more than $4 billion has been burned. According to analysts, this strategy will make the Ethereum network finally deflationary by 2022.

The largest US crypto exchange continues to enter new large-scale partnerships. This time, it was reported on the collaboration between Coinbase and Adidas. As of today, the details of the deal remain unknown. However, a day earlier, Adidas hinted at building its own metaverse based on the Sandbox project. This resulted in the SAND token soaring 100% in a few days.

Let’s take a look at the Bitcoin chart and try to figure out the direction it will take next week: 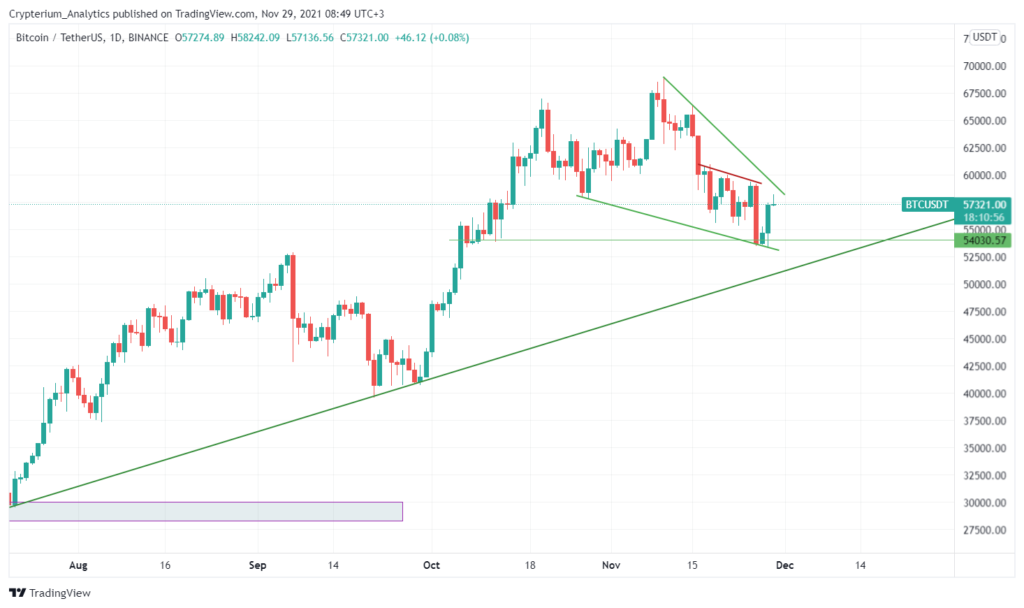 The chart is still trapped in a large falling wedge. We had expected the fall that took place within this figure last week, and moreover, we had predicted more than once that Bitcoin price would set at about $54,000, which happened on Friday.

On the weekend, buyers were able to push the price significantly higher and came close to the upper edge of the wedge. This is where we expect to see a battle between buyers and sellers. The current alignment of forces suggests that the price may overcome the upper border in the coming days. In this case, Bitcoin may reach the $63,000 mark.

Meanwhile, the altcoin market situation is different. As fear prevails here, buyers are slow to acquire other cryptocurrencies. That’s why Bitcoin’s rise over the weekend was much more notable than that of altcoins and its market dominance increased to 43%. This also indicates the potential weakness of altcoins in the near future, so it may be quite dangerous to trade them now. If the Bitcoin price turns down, altcoins will probably begin to plummet rapidly, as capital will flow either to stablecoins or to Bitcoin.