There were various news stories that came out during the past 7 days. However, they had a small impact on the market situation. The exception was the news from the notorious Mt.Gox exchange. It was revealed that the Tokyo District Court has finally approved the refund plan for all previously lost money but the MtGox’s Board of Trustees denied this and promised to announce the details soon. This news had the strongest impact on the Bitcoin market, causing the price to fall by 12% in one day. The market participants were afraid that 150,000 BTC – worth $9 billion at the current rate – may go to exchanges, which will lead to a severe collapse of an overall crypto market.

Along with that, there was good news from Jack Dorsey. The Twitter founder posted a whitepaper of a decentralized Bitcoin exchange called tbDEX. This project will be based on his payment company Square. The DEX will allow for exchanging assets on the Bitcoin network with no centralized intermediaries involved. In addition, the entrepreneur said that this will enable almost 2 billion people all over the planet to access financial services. At the moment, the document is not finalized and will continue to be improved.

Another positive news for Bitcoin came from El Salvador. The country’s government placed a $1 billion Bitcoin bond on LiquidNetwork. The technical partners of this operation were BlockStream and iFinex (the parent company of Bitfinex and Tether). Half of the amount received will be invested in Bitcoin mining development based on volcanic energy in El Salvador. The authorities also plan to use the rest of the funds and buy Bitcoin for governmental storage.

Besides, VanEck’s third Bitcoin futures ETF was launched on the CBOE. The BTC market did not react to this news in any way and the price remained the same. Another major investment company, BlackRock, claimed that it has no intention of launching its own Bitcoin ETF.

One of the oldest US cryptocurrency companies, Gemini, is about to close a $400 million investment round at a $7,1 billion valuation. The company’s executives, the Winklevoss brothers, aim to use this money to create a decentralized metaverse that would compete with Mark Zuckerberg’s Meta.

Moreover, it was time for the Zcash team to present their roadmap for cryptocurrency development until 2025. In its course, the project is expected to move to the proof-of-stake algorithm, become interoperable and connect with other blockchains. In addition, the team’s plans include expansion to the North and South Americas.

Now, let’s take a look at the Bitcoin chart and see how it has changed over the last 7 days. We’ll also try to identify the direction for the BTC price to move in the near future: 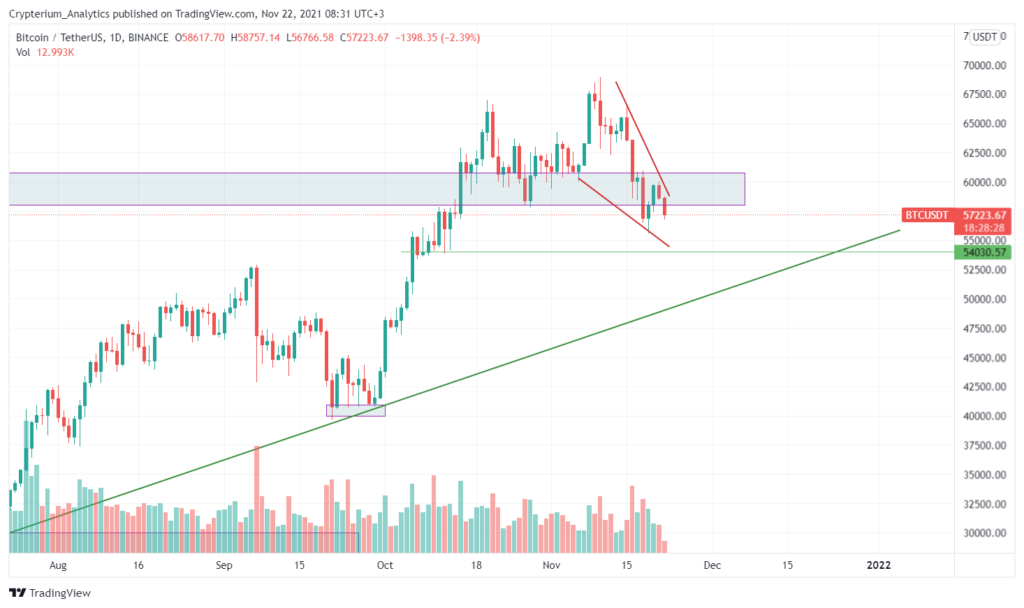 As of today, Bitcoin is trading at $57,200. The weekly candle closed with a serious hint of continued decline, blocking the latest growth of the last 21 days.

However, nothing still poses a threat to the uptrend. Currently, the chart is moving within a falling wedge, which may become a reversal pattern for Bitcoin. On the weekend, the price managed to reach the upper border, but buyers couldn’t break the $60,000 level and it rolled back down. We expect to see Bitcoin dropping to the lower border at around $54,000, which is also the local support level that was fixed in mid-October.

Therefore, we’re likely to see strong customer reactions, which will force the price to go down to $50,000 – $51,000. However, it’s barely possible that Bitcoin will sit here for a while, as market participants become more active next to the round levels. Thus, we expect that this move will result in an overall chart reversal and give an impulse to the further Bitcoin uptrend.