The current growth of the entire market is associated primarily with the London hardfork on the Ethereum network, which occurred in the middle of the last week. As a result of this update, 5 network improvements were integrated, the main one of which is the reduction of commission costs by burning on the Ethereum blockchain. This will reduce gas volatility and transaction costs for users.

This innovation will affect primarily Ethereum miners and their income will decrease by 20% – 30%. In just 4 days after the hardfork, more than 16000 ETH have already been burned, which is almost $50M. The largest platforms that burn Ethereum are OpenSea, Uniswap and the Axie Infinity game.

As a result of these events, the Ethereum rate has grown significantly, even despite the new hacker attack. This time, the Popsicle Finance project suffered and the losses exceeded $20 million. A hacker was able to exploit a vulnerability in a product called liquidity pools in Uniswap 3.0. The team promised to pay the hacker $1 million if he returns user funds. This offer has remained unanswered.

Problems were observed with the well-known fork of Bitcoin SV. The attackers were able to carry out a 51% attack and reorganized at least the last 14 blocks. As a result, the Bitcoin SV chain split into 3 branches. Surprisingly, this did not affect the price, which decreased by only 4%.

Another important news is a new large airdrop from the largest decentralized exchange with margin trading dYdX. Users that used the exchange before July 26, 2021, will be able to receive coins. To do this, they need to fulfill the conditions for the traded volume, the size of which is indicated on the exchange itself.

A lot of positive news has come from the mining industry. Several of the largest mining companies from the USA, Marathon and HIVE, have signed contracts for the supply of new ASICs worth hundreds of millions of dollars. At the same time, large investments were received by the KazDigital company from Kazakhstan, which is engaged in mining activities.

The past week turned out to be positive for the cryptocurrency market, and this can be judged both by the news and by the charts of the coins. Let’s take a look at the Bitcoin chart and try to understand in which direction it will move in the next week: 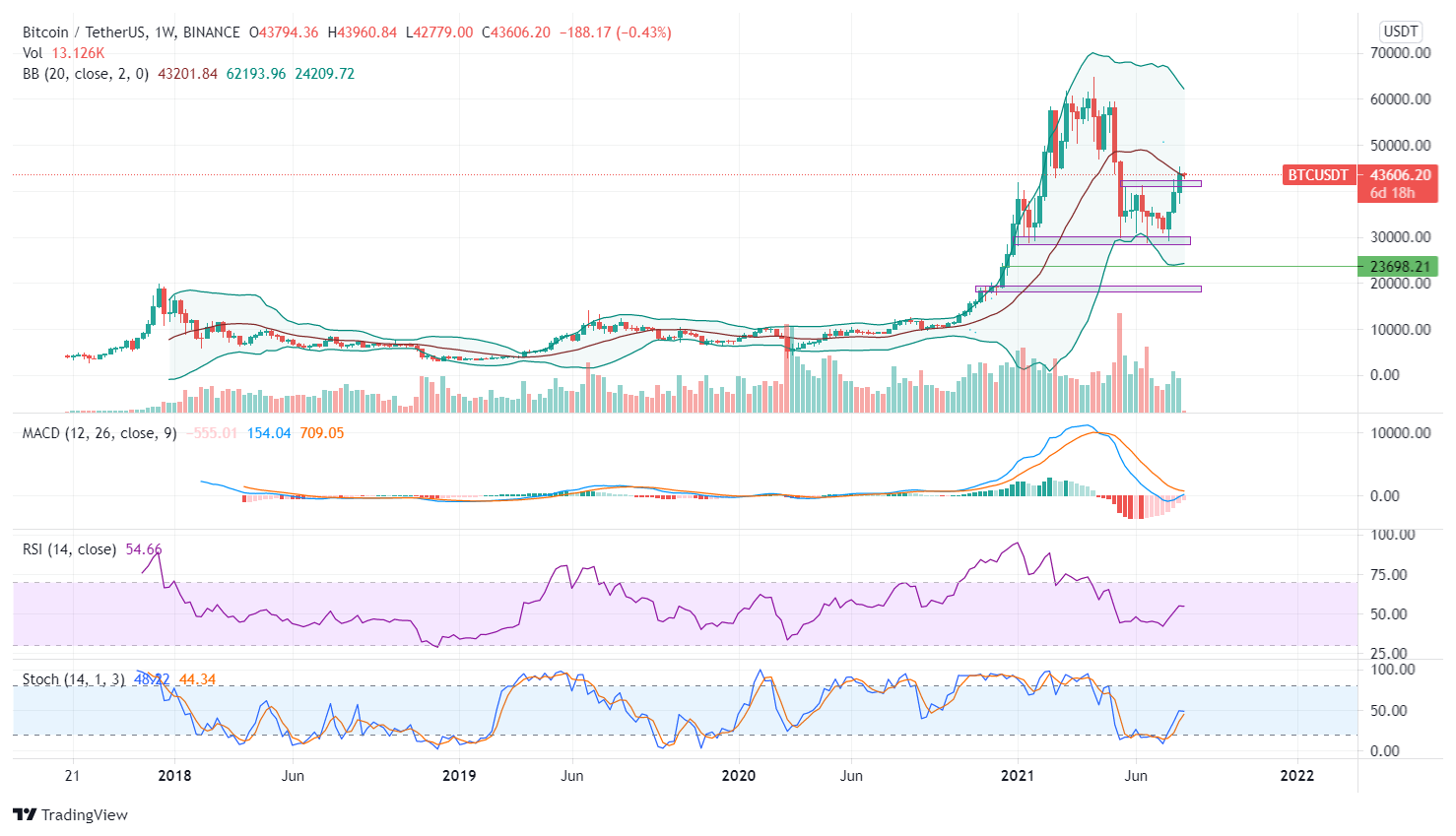 On the weekly timeframe, the situation looks very strong. It seems that now we can finally talk about the transition to an uptrend. The chart has already increased by 50% from its minimum in July 2021. The price has touched the Bollinger middle line and is preparing to rise further.

All indicators, RSI, Stochastic and MACD show a significant reversal. They also have a strong upward trend that may continue over the next few weeks.

In addition, a strong positive background also has a significant impact on the market. We believe that Bitcoin is starting a new upward trend that could last for several months. The closest target that Bitcoin may reach this week is the $48,000 – $50,000 range.

Are you ready to join the race? Make your first crypto purchase with zero fees and stay updated with our daily analysis.