Big news this week has come for Ethereum. During the developer conference, it was decided to reduce network costs and burn off part of the miners’ income. In simple terms, fees on the Ethereum network can drop significantly. At the same time, more than half of the miners express their indignation with this update. It is planned that the implementation of this function will occur in 4 months, in July 2021.

On the same day, it became known that a large Chinese photo processing company Meitu, which is listed on the Hong Kong Stock Exchange, had invested $40 million in Ethereum and Bitcoin. Moreover, according to their plan, there is a possibility that the same company will deploy its own decentralized applications on the Ethereum network.

Another piece of news about new investments in Bitcoin came from Microstrategy. Earlier this week, the company acquired 328 Bitcoins worth $14 million at a price of $45,000. A few days later, on Friday, CEO Michael Saylor announced that his company had acquired an additional $10 million worth of Bitcoins. Thus, the total Bitcoin balance of Microstrategy is 91,064 BTC.

The NFT industry continues to gain momentum. So, the creator of Twitter, Jack Dorsey, put up his first tweet for sale on the mentioned social network. The original price was $300,000. However, after 2 days, the price soared to $2 million and the auction is still ongoing. Such a bet was made by the head of Tron – Justin Sun.

All this news was positive for the market and this was reflected in the price of bitcoin and altcoins. Now let’s take a look at the Bitcoin chart in order to understand what to expect from it this week.

On the daily timeframe, the chart came close to the downtrend, which we marked with a red line. Most likely, in the coming days, the price can gain a foothold above it. This will be a bullish signal for Bitcoin. 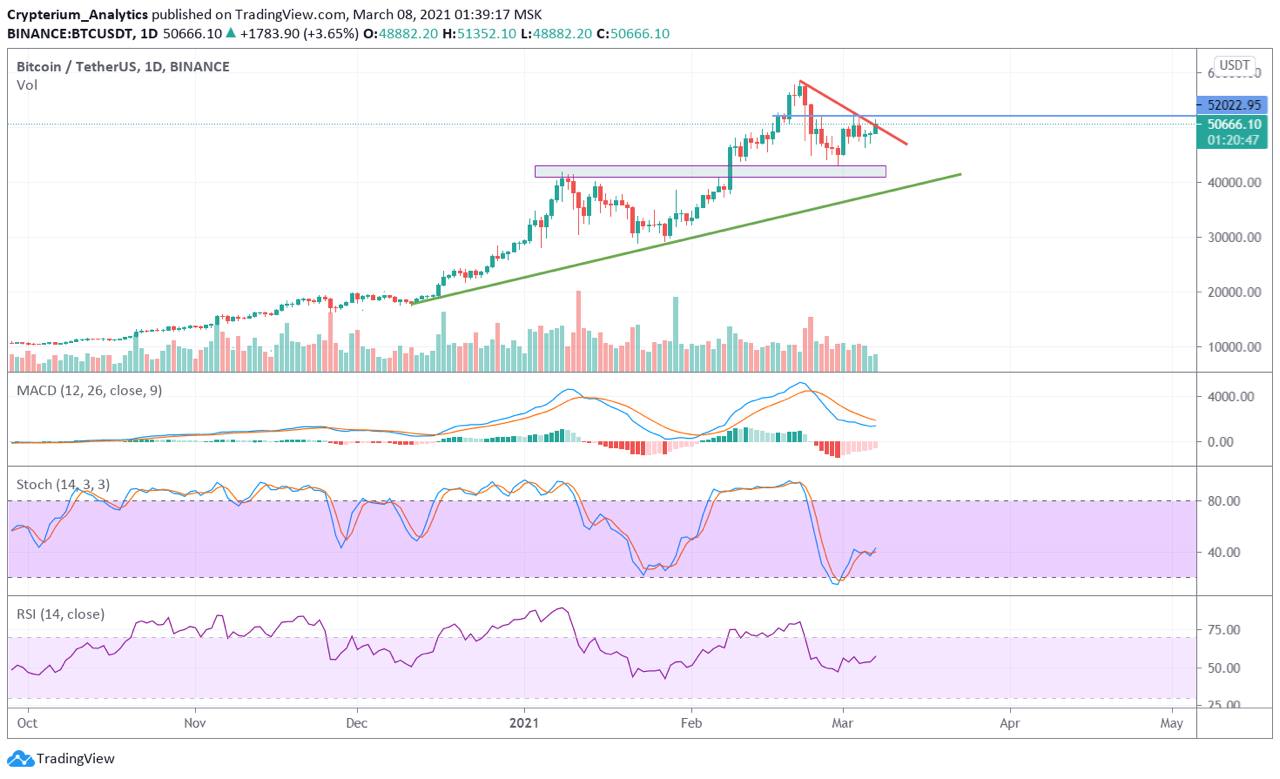 In addition, on the 4-hour timeframe, you can see that an ascending triangle has formed, which also indicates continued growth.

All of the technical indicators have gone badly and have already turned upward. It also adds optimism for future growth.

Considering all these factors, we expect to see the price of bitcoin to rise at least to $57,000 this week. It is possible that the price will even set a new ATH and could its growth to $60,000. However, most likely, this will not happen on the first try, so you need to carefully monitor the schedule.

To do this, read our daily market analytics to stay informed about upcoming events and changes on the chart of Bitcoin and other cryptocurrencies.