Since last Friday, the Bitcoin price has overcome the important psychological mark of $40,000, thus increasing by 16% from $37,000 to almost $43,000 now. At the same time, the trading volume remains the same and does not exceed $20 billion.

There was a lot of significant news last week with the second-largest hack in the DeFi industry being among it. The attacker managed to withdraw 120,000 ETH using the Wormhole cross-chain bridge exploit. At the time of the incident, this was around $320 million. After that, the team fixed the bug and offered the hacker $10 million but received no response. Two days later, it was reported that one of the largest investment firms in the world – Jump Capital – covered all losses and replaced missing Ethereum funds. And then it turned out that Jump Capital had owned Certus One, the Wormhole’s developer, since 2021.

The Binance Smart Chain team has unveiled plans for 2022. The main goal will be to scale the network and implement tools for cross-chain solutions. In order to do this, they plan to develop two new side-chain solutions – the first one will allow many side chains to run simultaneously, while the second one will act as a new ledger and computing engine with new validators.

Last week, MicroStrategy purchased more Bitcoins on a drawdown once again. This time, the company bought 660 BTC worth about $25 million. Thus, Microstrategy acquired 125,051 BTC in total and spent $3.78 billion on it, which means that the average purchase price was $30,200. The company’s director stated that MicroStrategy shares were the best alternative to Bitcoin-ETFs.

Another important event took place at the end of last week. Shares of Meta (formerly known as Facebook) plunged 25% in one day due to releasing the company’s 2021 report. It revealed that Meta continued to spend heavily on its own metaverse project. So, in 2021, the company wasted over $13 billion on that. In addition, Meta’s performance for 2021 was significantly worse than expected. All this led to overall investors’ dissatisfaction and resulted in the largest collapse of the company’s shares.

Also last week, it became known about two major acquisitions. First, FTX acquired the Japanese regulated exchange Liquid. The transaction amount was not disclosed, but during its latest round Liquid was valued at $1 billion. After that, it was also revealed that ConsenSys had acquired the MyCrypto wallet. The project team will join the Metamask development. In the future, it is planned to combine two crypto wallets to create more powerful functionality.

All this news has had almost no impact on Bitcoin. Let’s take a look at the chart of the first cryptocurrency and try to figure out which direction Bitcoin may take in the near future: 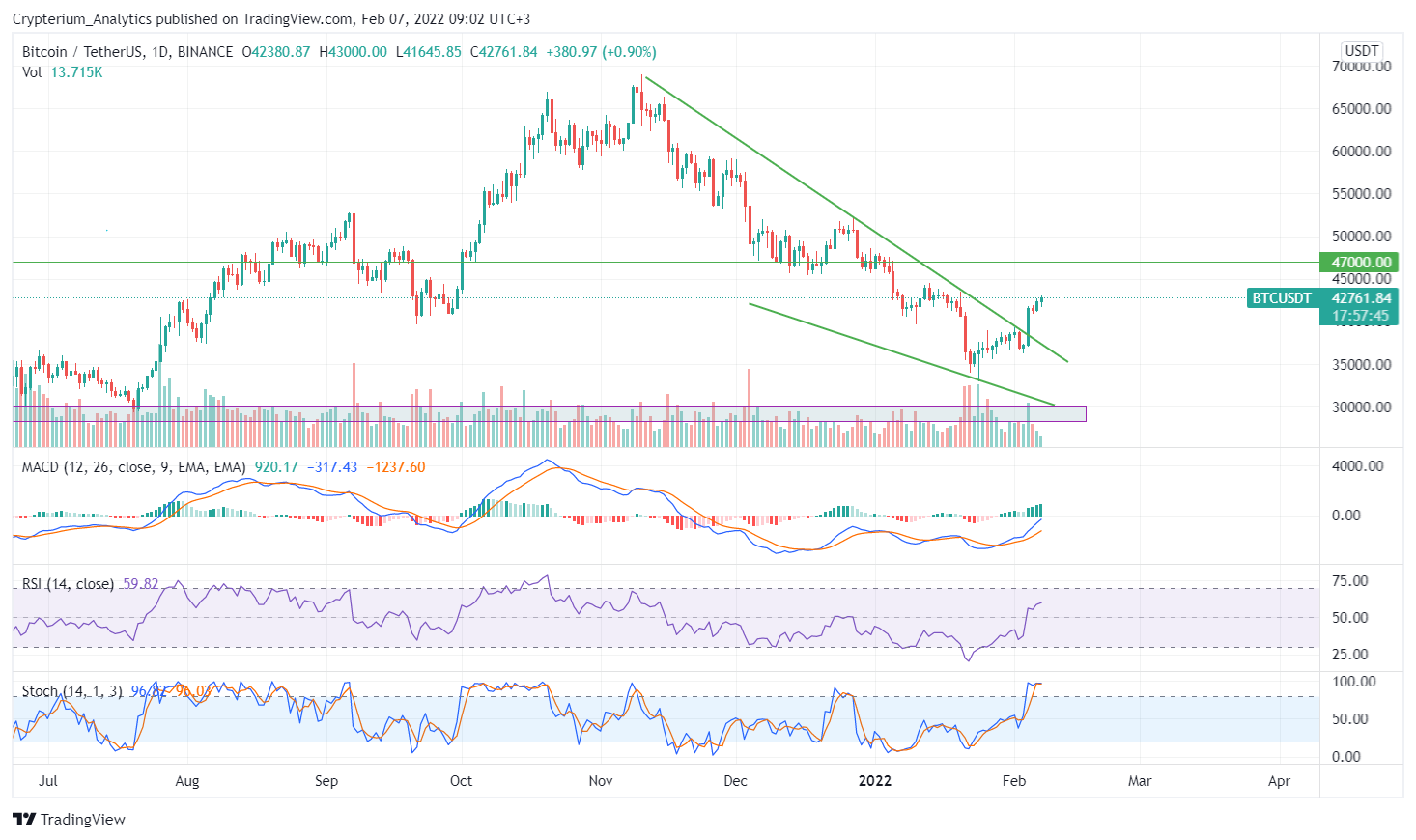 Last week’s growth appeared to be very important for the entire market. Thanks to it, Bitcoin managed to leave the descending wedge and consolidated above it. The chart approached the local resistance level around $43,000. However, this pattern can be very misleading as many different formations have emerged during this time.

It is too early to say that Bitcoin has entered an uptrend. This can be assumed only after the price fixing above $47,000, or, ideally, above $50,000. Now, we are watching only the first correction after the large-scale decline, which began in November.

Meanwhile, the Bitcoin market dominance remains at the same level. This suggests that altcoins are currently following Bitcoin and all their movements highly depend on it. Therefore, it is now possible to trade them only with an eye on Bitcoin.