At the same time, the dominance of Bitcoin also increased and amounts to 45% at the moment. This indicates the fact that altcoins were in no hurry to follow Bitcoin and most of them remained at the same price levels.

It is possible that the positive news from the SEC had such an impact on Bitcoin. The agency has approved an ETF application from Volt Equity. This instrument will include stocks of 30 companies associated with the crypto industry. The largest and most famous of them are Twitter, Tesla, Square, Coinbase and PayPal. Thus, this tool does not imply physical acquisition and ownership of cryptocurrency.

At the same time, it became known that another large investment company, Invesco, launched 2 ETFs at once on CBOE. One index fund includes companies that develop infrastructure solutions for the crypto industry and mining companies. Another index will additionally include companies not related to cryptocurrencies.

Thus, this week there were three ETFs at once aimed at the cryptocurrency market. All of these indices have been approved by the regulators and are going to the wide market. This event has been expected for the last 3 years and it happened last week.

Another news came from El Salvador regarding Bitcoin. This time, the president of the republic announced that he is introducing a fuel subsidy when paying in Bitcoins from the Chivo wallet. At the same time, gas stations will be reimbursed for losses from taxes. In addition, Nayib Bukele reported that as a result of Bitcoin’s growth, the country has a budget surplus of $4 million. He plans to invest these funds in a new project.

The second cryptocurrency is not doing so well. A vulnerability was discovered in the Rocket Pool and Lido staking protocols in Ethereum 2.0 that could lead to the loss of user funds. Funds in the amount of $71 million were under threat. The teams of both projects will be testing and fixing this vulnerability during the current week.

In addition, over the weekend, it became known that the Ethereum developers proposed to move the difficulty bomb to May 2022. This is pretty big news, as it will delay Ethereum’s transition to Proof-of-Stake by another six months.

At the same time, there was another notable event related to Ethereum. So the solution of the second level Polygon continues its active development. Last week, the number of active addresses on this network surpassed that of the Ethereum network for the first time. This growth was made possible by the very low commissions of the Polygon network and the number of addresses grew from 0 to 568 thousand in just six months.

Let’s take a look at the chart of the first cryptocurrency and try to understand in which direction the price will move this week: 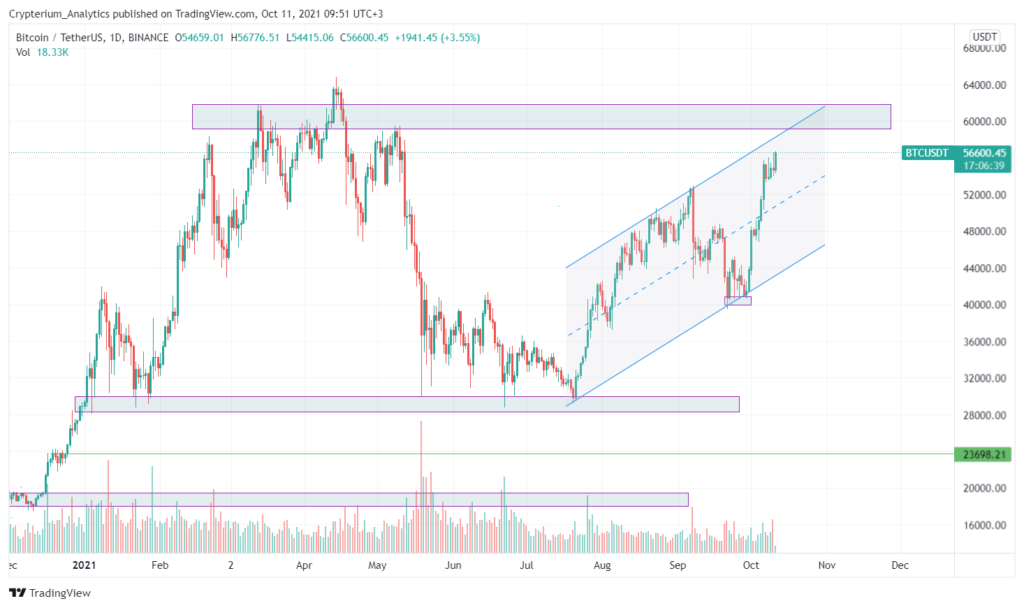 Bitcoin chart has been in a strong upward channel since early August. September falls almost perfectly fit into this pattern and only confirm it. Last week, the price has confidently broken through the middle line and is heading up.

Near the $55,000 – $56,000 zone, Bitcoin met slight resistance and paused for a while. However, the weekly candle closed very strongly. It indicates the continuation of the uptrend this week. Potentially, the price can reach the upper border of the channel and enter the $59,000 – $61,800 zone on powerful purchases.