One of the most notable events of this week was the live meeting of Elon Musk, Cathie Wood, and Jack Dorsey. As a result of this event, it became clear that they all experience positive emotions from cryptocurrencies.

Elon Musk noted that he holds Bitcoin, Ethereum, and Dogecoin. Additionally, his SpaceX company owns some amounts of the first cryptocurrency. He also noted that he would soon be ready to re-launch the purchase of Tesla cars for Bitcoin.

Jack Dorsey noted the importance of Bitcoin and the entire cryptocurrency market in general. In addition, he again mentioned that he would create a new large project in the crypto industry. A few days later, he announced that Twitter would soon be implementing Bitcoin payment for ads.

The big news came from one of the largest banks in the US, JP Morgan. This financial corporation has authorized the purchase of Bitcoin, Bitcoin Cash, Ethereum, and Ethereum Classic for retail customers. However, it is important to note that a share from the Grayscale cryptocurrency fund will be bought. Essentially, customers will buy a derivative product that resembles a traditional ETF.

Grayscale Investments announced the launch of a new product that includes DeFi projects. This product will be an index fund available only to traditional investors.

Some news came from Binance at once. This week, it was revealed that FTX had repurchased shares from Binance at a valuation of $18 billion. This means that this venture investment generated over 1400% for Binance. In total, in this round, FTX was able to raise $900 million from the largest cryptocurrency venture funds.

At the beginning of last week, Binance carried out another $393 million BNB coin burn. This is already the 16th quarterly coin burning.

All this news triggered the growth of the entire market. So let’s take a look at the Bitcoin chart and try to figure out which direction the price might go this week: 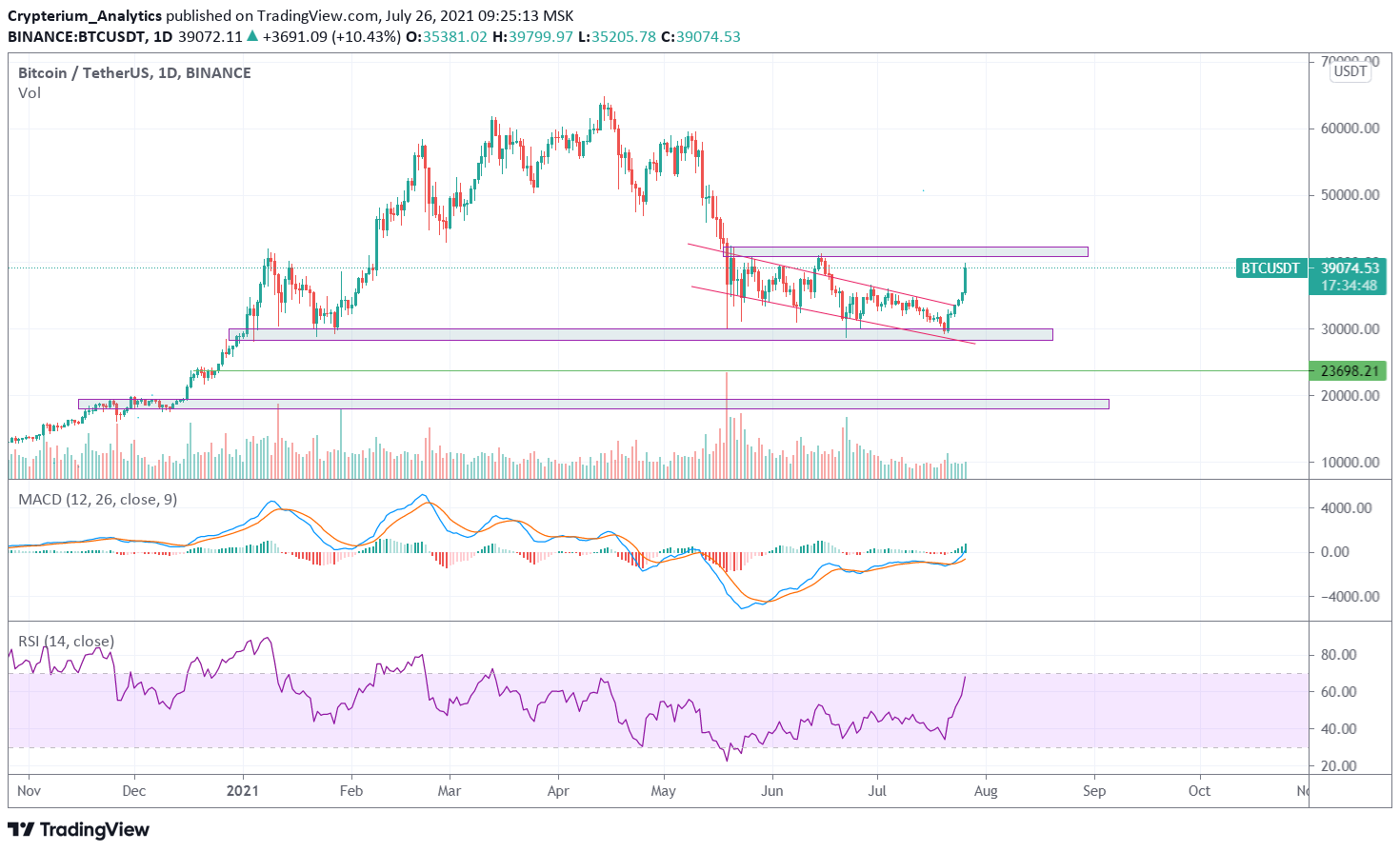 The chart broke through the upper border of the descending channel and fixed above it. As a result, this led to a sharp rise in the price up to $39,800. At this level, sellers activated and started pushing the price down.

The growth on the chart looks very significant. However, take a look at the trading volumes. They have practically not changed and are still low. We looked at all the major exchanges and ensured that there were no big buys on this growth. This is a significant factor that indicates a manipulative price movement.

More globally, it can be seen that the price is still squeezed in a wide range of $30,000 – $40,000. Therefore, now it is necessary to wait and see how the market will move in the coming days. The key point is $40,000. If Bitcoin gains a foothold above it on the daily timeframe, then there will be an opportunity to enter a long position with a rise of 20% to the level of $48,000.