Bitcoin dominance has been declining for two weeks in a row and accounts for 44% at the moment. This is primarily due to the fact that some altcoins are showing incredible growth. First of all, this concerns the Shiba Inu. Its price has increased by 300% in a week, and its capitalization reached $35 billion. As a result, this project entered the Top-10 largest cryptocurrencies and is inferior to another meme-coin, Dogecoin, by only a few tens of millions.

Following this event, many other dog-related cryptocurrencies such as Floki and Samoyed began to show growth. Soon after these events, it became known that some wallets have successfully invested in these projects and were able to increase their capital by hundreds of thousands of percent. All this provoked another wave of growth.

Meanwhile, other projects also showed significant growth. So, 1inch and BAT grew by 100% per day, Decentraland grew by 700% in 3 days, a number of other coins from the Top-100 showed an increase of tens of percent. Thanks to this, the dominance of altcoins continued to increase.

Another news that spread all over the world was the rebranding of Facebook. Now the group of companies will be called Meta. This is connected to the fact that ex-Facebook is opening a new large project to create a metaverse with the support of NFT tokens. Because of this, Decentraland has shown such strong growth over the past few days. Thus, Facebook has finally indicated that it wants to move into the crypto industry and supports it.

Positive news continues to come from one of the largest payment companies – Mastercard. CNBC announced that this corporation will soon open support for cryptocurrencies. Banks and shops will be able to integrate various infrastructure solutions such as crypto wallets, debit cards with cryptocurrencies, cashback in cryptocurrencies, and much more. The Vice President of the company said that in this way the company is going to become a competitor for centralized cryptocurrency exchanges.

While the entire community has been keen on buying altcoins, the El Salvadorian government continues to put its plan into action. They added another 420 Bitcoins to their reserves this week. Thus, El Salvador stores 1,120 Bitcoins in their wallets, which is about $70 million at the current exchange rate.

The past week was very eventful. Many began to talk about the next altcoin season. But let’s take a look at the Bitcoin chart and try to understand where it might be heading in the next 7 days: 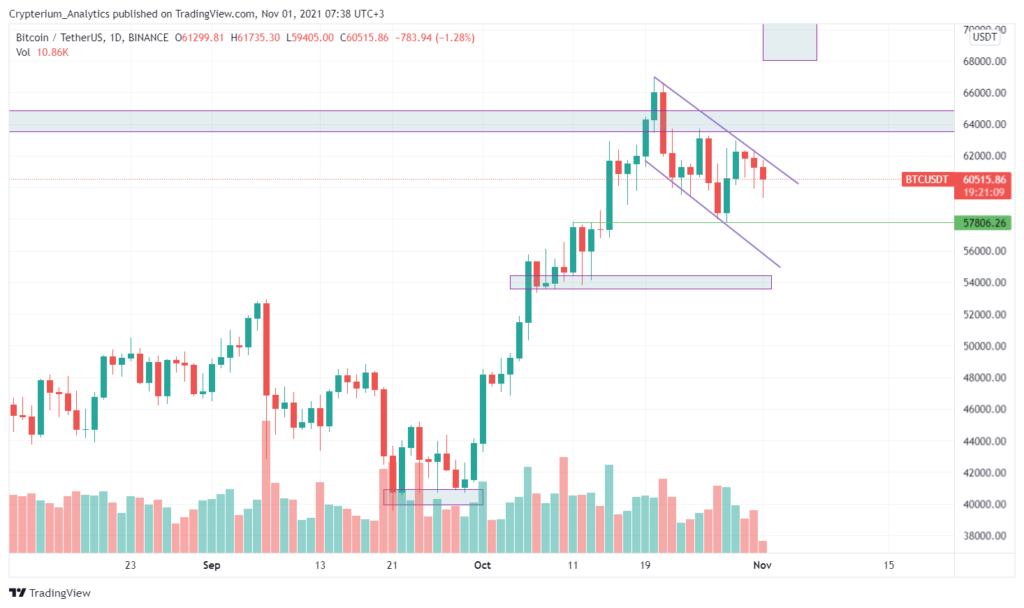 Since October 20th, the chart has moved into a local downtrend and has already dropped by 10% from its highs. In the course of this, Bitcoin formed a downward channel. For the past 4 days, Bitcoin has been unable to overcome the upper limit, which indicates the weakness of buyers.

This trend could lead to a decline in the coming week. The closest support level is at $57,800. This mark corresponds to the middle line of the channel and, with a high probability, the price can go exactly there. However, in case of such a decline, this movement may continue further. In this case, Bitcoin may fall to the lower border of the channel, which corresponds to a strong support level at around $55,500. This is where the price may go.

If this drop occurs, then the rest of the market could also decline significantly. First of all, this is due to the fact that many altcoins have already grown significantly and there is high excitement in the market. In addition, the monthly candlestick closed yesterday, and it means that Bitcoin has grown by 40% in October. This is a strong value, so early November 2021st could turn negative in terms of price action.