Bitcoin proved to be more resilient than other cryptocurrencies this time. Perhaps this is due to the release of the new Bitcoin Core client (V 22.0), which will support the Taproot feature. Taproot is an important update that improves the privacy and scalability of the Bitcoin blockchain. Developers plan to activate it in November 2021. The Taproot update will be the largest since the introduction of Segregated WItness (SegWit) in 2017. This could have an important impact on the price of the first cryptocurrency in the medium term.

Other popular blockchains have seen significant problems this week. First of all, this concerns the Solana project. Its network was subjected to a spam attack, during which the volume of transactions reached 400,000 TPS. This caused a heavy load on the network and many nodes went offline due to lack of memory. The result was a severe failure that resulted in the network’s multiple forks. The developers were able to solve this problem and returned everything to the original parameters. But within 16 hours while the teams were solving this problem, no new blocks appeared on the Solana blockchain.

Another popular protocol, Arbitrum, also experienced operational problems. The network experienced an outage that resulted in an error in the smart contract, as a result of which the network did not process transactions for 45 minutes. As a reminder, Arbitrum is Layer-2 for Ethereum and was launched less than a month ago.

More news came from Coinbase this week. The largest American crypto exchange announced that it is going to place bonds for $1.5 billion due in 2028 and 2031. The next day, the team announced that they were increasing the amount to $2 billion due to strong demand. Bonds maturing in 2028 will have an annual rate of 3.375%, if maturity is in 2031, the annual rate will be 3.625%. In addition, it became known that Coinbase will become the provider of analytical software for the largest exchange ICE.

Positive news for the crypto market continues to come from El Salvador. Its President noted that over 500 thousand citizens of the country are using the Chivo wallet already (over 7% of the total population). This is very strong progress since these indicators were achieved in less than a month. In addition, the country’s government announced the exemption of foreign investors from capital gains tax and approach tax on Bitcoin transactions.

Also, literally today, the President of El Salvador announced that the government bought another 150 Bitcoins after the night fall.

Let’s take a look at the Bitcoin chart and try to understand how this news background might affect the price in the near future: 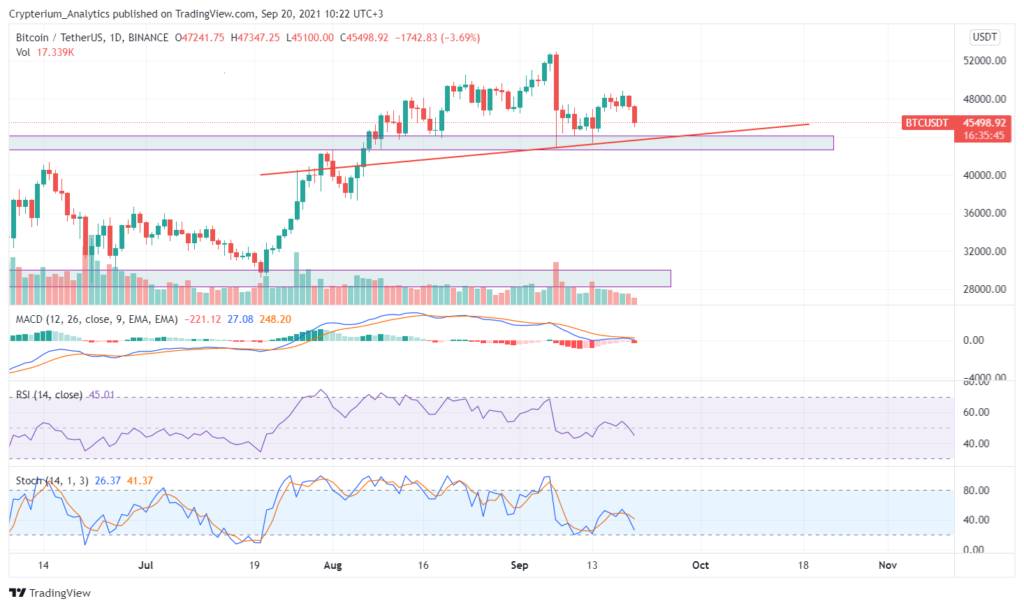 Last week, the price of Bitcoin almost reached $49,000. Unfortunately, this cannot be called a full-fledged uptrend. It looks more like a rebound after the fall on September 7. Our guesses began to be confirmed over the weekend when the price of Bitcoin dropped by $3,500, or 7%.

The key level for Bitcoin is the $42,500 – $44,000 range. Last month, the struggle between buyers and sellers unfolded right in this range. Most likely, this is where the price of the first cryptocurrency will come in the nearest days. This means an upcoming fall of 3% – 6%.

And now, depending on how events will develop in this zone, we will be able to predict in which direction the chart is more likely to go.