In general, the market now looks chaotic and uninformative. However, a number of high-profile news for the crypto industry came out this week.

The loudest news was the news of the suicide of John McAfee, who was an idol for many and had the highest fame in the crypto industry in 2017-2018. We will remind you, that the Spanish authorities detained the businessman in the fall of last year and imprisoned him for tax evasion. After 9 months of arrest, the authorities announced the extradition of McAfee to the United States. The very next day he was found hanged in his cell.

Negative news continues to come from China. This time, the National Bank of China has banned banks and payment systems from serving cryptocurrency transactions. The authorities require banks to check their clients for participation in OTC transactions and block their accounts if such incidents are detected.

The exodus of miners from China continues. Many big companies like Canaan move their equipment to neighbor Kazakhstan, where mining is legalized. Due to the bans in China, many supported mining devices have appeared on the market for sale. Therefore, there is a glut of the market and, by the way, the hashrate of the Bitcoin network continues to fall.

Preparations for an important London update continue on the Ethereum network. On June 24, the developers activated this hardfork on the Ropsten testnet, two weeks later they want to do the same on the Rinkeby testnet. The test run in Ropsten was successful and the developers are now tracking the update to identify bugs. If successful, this update will take place on the Ethereum network in the second half of July.

El Salvador’s authorities will hold a large-scale airdrop for its citizens. They will give out $30 in Bitcoins to every resident who installs the Chivo cryptocurrency wallet. Following this country, Paraguay also began to consider the bill on the recognition of Bitcoin as a means of payment. Consideration of this project is scheduled for July 14th.

In addition, it is worth noting that Microstrategy bought a new batch of Bitcoins this week for almost $500 million. Taking this purchase into account, this company is holding 105,085 Bitcoins with an average purchase price of around $26,000.

Let’s take a look at the Bitcoin chart to understand whether it is possible for its quotes to fall to these levels: 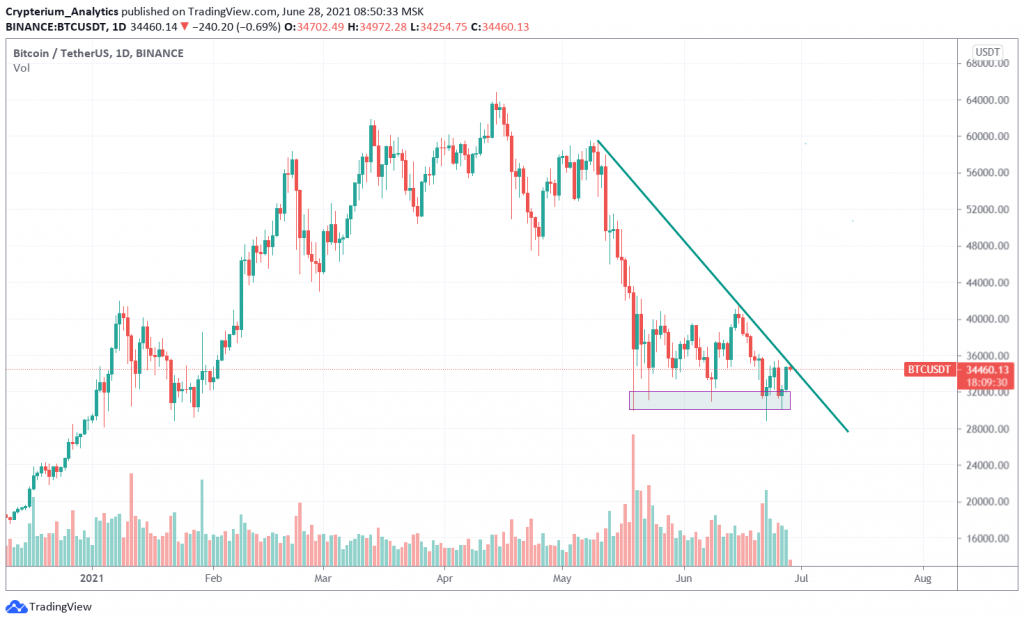 The price has got as close as possible to the downtrend and will test it for a breakout in the coming days. However, it is noticeable to the naked eye that the chart is pressed against the lower border in the $30,000 – $32,000 area. This indicates the weakness of buyers in the current market.

In addition, trading volumes continue to fall and even strong news does not increase them. This indicates low liquidity in the crypto market right now. The situation is very similar to the fact that many market participants sold their assets and left the market in the summer. We saw similar events last year when the Bitcoin price was in a flat for several months.

The priority is a fresh decline and consolidation below $30,000 this week. The likelihood of growth is now very weak, as it is not clear how Bitcoin can turn around and overcome the weakness in the market.You can cash out your profit directly to your bank card and wait for the crypto market to recovery.

The altcoin market will behave even worse. We expect that they will decline due to the flow of capital into Bitcoin and stablecoins. In this case, the dominance of Bitcoin will continue to grow and may reach 49% -50% by the end of the week.