Last week, the price of Bitcoin increased by 2% and the weekly candle closed above $21,000. At the same time, the trading volume continues to decline and currently stands at $19 billion per day. Bitcoin dominance in the market is down 1% in a week. This is due to the fact that many of the altcoins showed a confident uptrend.

One of the biggest news last week was another cross-chain bridge hack. This time the hackers attacked the official Harmony blockchain bridge called Horizon. The attackers were able to withdraw over 85,000 ETH, which is about $100 million. This is the third largest cross-chain protocol hack, that comes only after attacks on Ronin and Wormhole.

Also, one of the largest TVL projects, Convex, was attacked. Hackers were able to take control of the DNS server in order for users to approve malicious smart contracts. 5 addresses fell into this trap before the project team was able to solve this problem. The amount of stolen funds was not reported, but Convex is going to recover the lost funds.

News continues to come in about companies that experienced problems during the last cryptocurrency market crash. So Alameda Research announced that it is providing a $250 million credit line for BlockFi’s centralized lending service. In addition, there has been a rumour that Goldman Sachs is raising a $2 billion fund to buy out troubled Celsius protocol assets. The problems of 3 Arrow Capital’s fund affected one of its creditors – Voyager. It became known that they requested a refund of $650 million and limited the withdrawal of funds on their site. As a result, the company’s shares fell immediately by 60%.

Last week there was another recalculation of the complexity of the Bitcoin network. This time, its value fell by 2.35% and dropped below 30T. At the same time, the network hashrate of the first cryptocurrency updated its historical maximum at around 231 EH/s. Most miners began to experience big problems. Many of them started selling their Bitcoins on the market and moved from a long-term hold strategy to direct sales of mined coins. This has already been announced by one of the largest US mining companies – Bitfarms.

Another notable news came from Binance exchange. The company announced a partnership with one of the most famous players in the history of football – Cristiano Ronaldo. As part of the cooperation, an exclusive NFT will be released on the Binance marketplace. The launch of the first collection is scheduled for the end of 2022.

The news background of this week was strongly negative. The consequences for many crypto companies as a result of the collapse of Bitcoin a week earlier have become known. Against this background, the pressure on the price of Bitcoin increased and it could not move to growth. Let’s take a look at his chart and try to figure out what to expect this week: 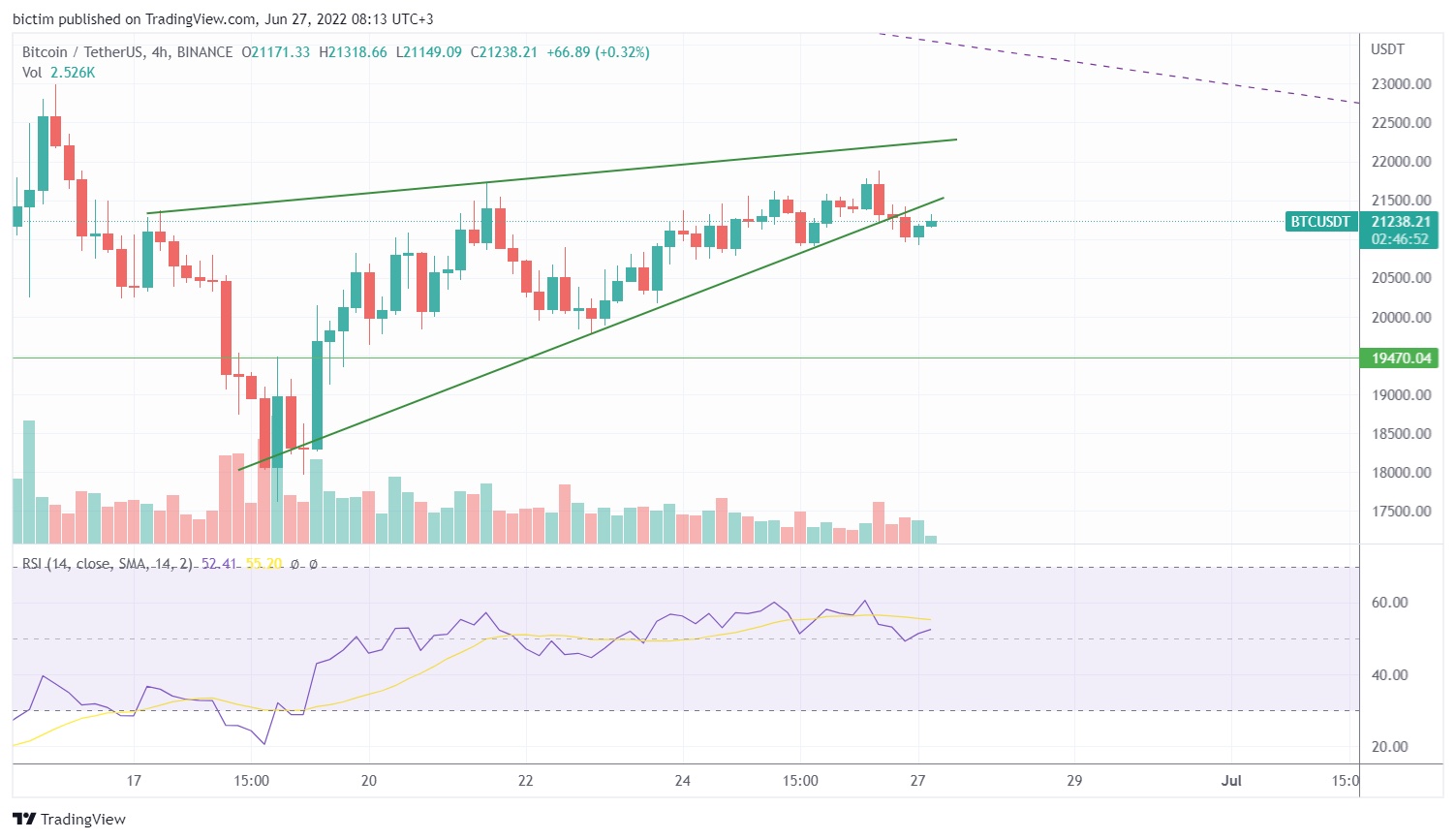 At the beginning of last week, the price of Bitcoin confidently rebounded from its low by 22%. However, after that, Bitcoin went into a sideways movement. Volatility decreased day by day. Overall, this points to the fact that the climax of the collapse has already happened. This is also indicated by the consequences that we talked about above.

From a technical point of view, an “ascending wedge” pattern has formed on the chart, which is the final one on the upward movement. However, the strength of this formation may be small due to the fact that most of the money has left the market lately. Therefore, we expect to see a slight sideways decline to the $19,500-$20,000 range.

The current situation is largely reminiscent of mid-May this year. After the collapse of Terra and UST, the Bitcoin market went into a protracted sideways movement. This is a natural situation, as the market needs time to recover. Traders and investors evaluate losses and recalculate risks. This may take several weeks.

Therefore, in the next 7 days, we do not expect significant movements in the first cryptocurrency. Moreover, the probability of a downward movement is now even higher than a further upward movement.