The past week was unsuccessful for Bitcoin and was characterized by a halt in growth. Over the past 7 days, the price has decreased by 3.5% and is currently trading at $35,000. The trading volume decreased more than 2 times and amounts to $52 billion per day. Volatility behaves in a similar way – at the beginning of last week it was 17% per day, and now about 7%.

The information background was also not eventful. The most important among them is the major update of the Bitcoin network version 0.21.0. It included several updates at once, including the addition of V-3 addresses for the Tor Network, the introduction of descriptor wallets and a new filtering algorithm for light clients. In addition, a new Signet testnet with centralized control was launched for Bitcoin.

In addition, Schnorr / Taproot signatures have been added to the bitcoin code and will be activated in the near future. These updates allow for increased Bitcoin performance and transaction anonymity. This update has been in development since the beginning of 2020 by a large number of developers.

Another major news was that crypto custodian Anchorage became the first bank in the United States which received a federal bank license. Previously, Kraken and Avanti have already received bank licenses, but they have local status. Also in the near future we may see new banks with a federal license represented by BitPay and Paxos companies, which have also submitted applications to the government agency.

And here is the news regarding the high popularity of Bitcoin at the moment – the number of searches for “bitcoin” has approached a record high according to Google Trends. Judging by this chart, it seems that Bitcoin’s popularity will continue to increase in the coming weeks.

Now let’s take a look at what happened on the Bitcoin chart over the past 7 days and what to expect in the next week. 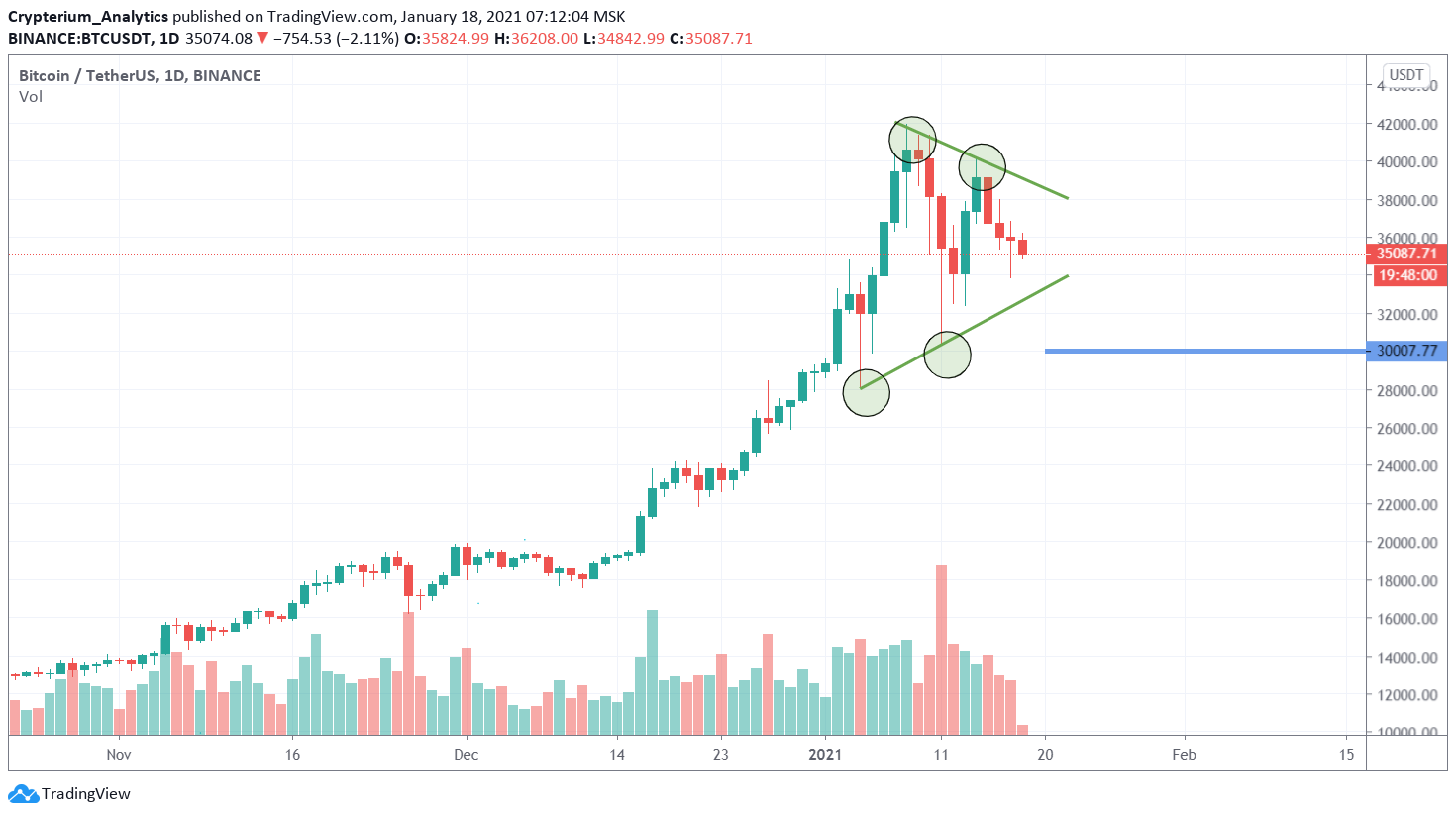 The start of last week was disastrous for Bitcoin, as its price fell from $38,000 to $30,000, or 26%. However, at that moment, buyers became more active and did not let the chart go lower. After this collapse, Bitcoin again showed growth to $40,000, but was unable to gain a foothold at this level. What to expect in the next week?

Now we can say with confidence that the chart has formed an “equilateral triangle” pattern. This is proved by the 4 pivot points of the chart touching the boundaries of the triangle. Usually, such patterns indicate a continuation of the trend, in this case an upward trend.

However, we would like to warn you against long positions at the current time. First of all, due to the fact that now it is absolutely not clear where the chart can go – up or down.

Indicators also do not provide a complete picture.

Stochastic and RSI tested the upper bounds and turned down. At the moment, both indicators are at the middle line, or, in other words, in equilibrium. The situation is similar with Bollinger Bands – Bitcoin is trading near the middle line. Only on the MACD one can notice that the lines have turned down and at the same time the lower moving average line crossed the older one, which usually indicates a decline.

Trading in such a situation is quite difficult and it is best to choose a triangle breakout strategy. If the price breaks through the upper border and fixes there on the 4-hour or 1-hour timeframe, then this is a signal to grow up to $45,000 – $50,000. At the current level, this level is around $39,100, but it will decline day by day.

Altcoins may drop in price, as they have shown significant growth in recent days. This is also indicated by the dominance of Bitcoin, which has been declining for more than 2 weeks and therefore we expect it to increase.