Last week, the cost of Bitcoin increased by 1.5% and fixed above $30,000. At the same time, the rest of the market continued to fall. As a result, Bitcoin’s dominance in the market has been growing for 4 weeks in a row.

One of the most notable events of the past week was the launch of the Optimism project token, which is developing Layer-2 for Ethereum. The project distributed 5% of its tokens in the form of an airdrop among the early participants of the network. The OP coin was immediately added to the largest crypto exchanges. At the beginning of trading, the cost of the token was $4.5, and by the current coin the price had dropped by 70% to $1.25.

Another important event was the announcement from the New York State Senate, which refers to the introduction of a two-year moratorium on the mining of cryptocurrencies using energy generated from carbon sources. All existing miners will be able to continue working as usual. With this move, the state government wants to study the impact of mining on the environment. This move was criticized by the largest representatives of the crypto industry, including Vitalik Buterin.

Binance Labs launched a fund for the development of Web3 projects. The venture arm of the Binance exchange is going to support startups in the field of DeFi, NFT, social networks and games related to blockchain technology. The funds will be directed to startups at different stages of development. Among the partners of this fund is the structure of DST Global Partners and Breyer Capital. The remaining members of the fund remained unnamed.

After the collapse of the Terra project and its algorithmic stablecoin UST, the crypto community became distrustful of such projects. Therefore, the creator of the Tron blockchain, Justin Sun, issued a statement that they have learned from this crash and will take them into account in their algorithmic stablecoin. To do this, they maintain collateral in BTC, TRX and stablecoins, which is about $1.5 billion. This is almost 2 times the current circulation of the USDD stablecoin. In the future, the collateral is planned to be maintained at the same level related to USDD.

The bear market started talking about a month ago. Last week, confirming factors of this began to appear. Thus, the largest crypto exchange in Brazil is going to cut 10% of its staff. A large exchange in the US, Gemini, took the same step. Its creators, the Winklewoss brothers, announced the beginning of a bear market and a difficult macroeconomic environment, and therefore the company must carry out a partial reduction in staff. It should be noted that about 1000 employees work in this exchange.

All these events had almost no effect on the Bitcoin chart and the price remained in a narrow sideways movement. Let’s take a look at the chart of the first cryptocurrency and try to figure out what to expect from it this week: 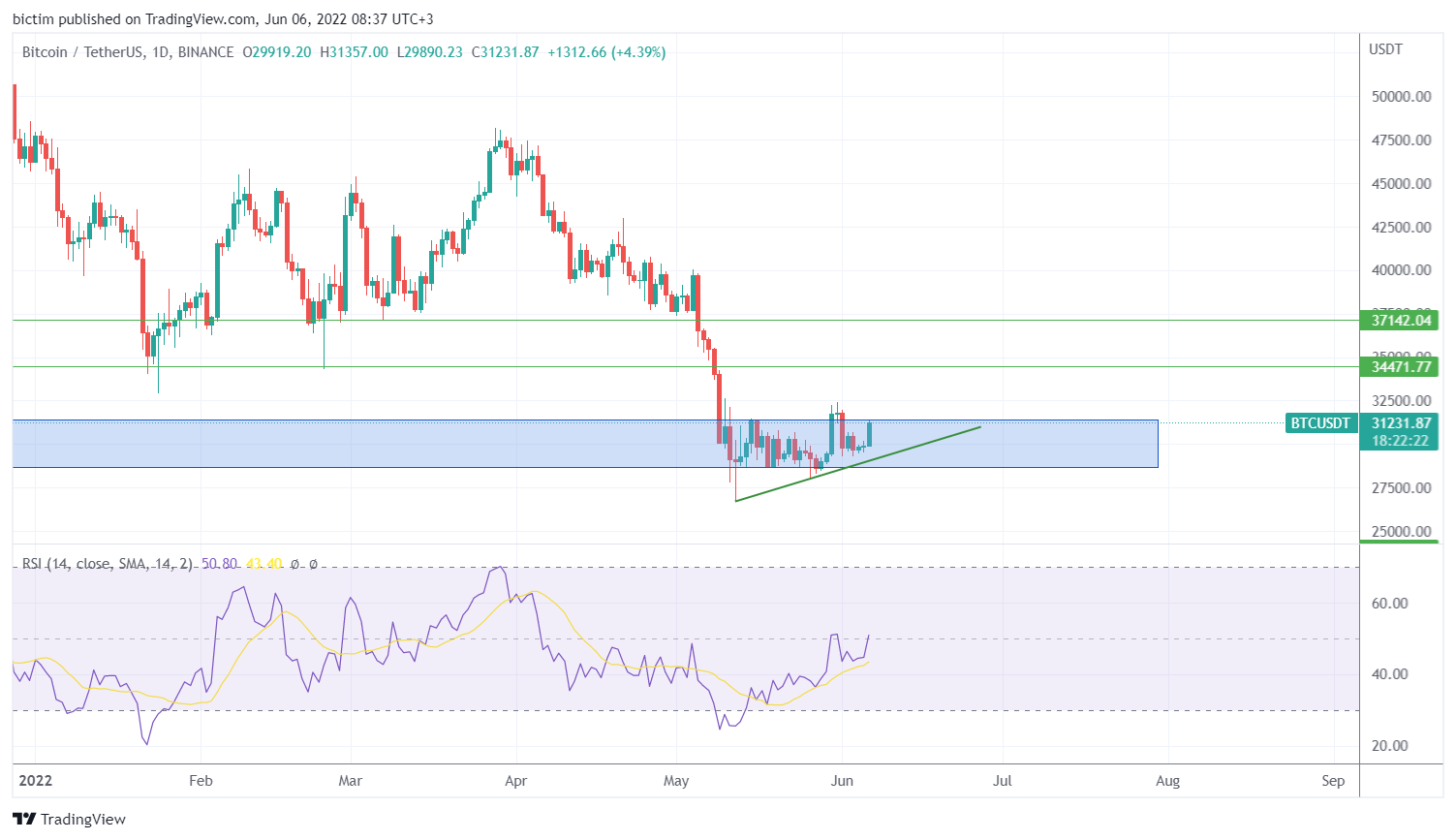 The price of Bitcoin has already risen today and is around $31,000. Here is the upper boundary of the side channel. Most likely, in the coming days we will see a struggle between buyers and sellers for this level. Last week, the bulls broke through the upper border of the channel and even fixed above it. However, the next price fell again towards the middle of the channel.

It is important to note that on the weekly timeframe the price closed in the green zone. This was preceded by 9 red candles. Such situations have never happened before in the history of Bitcoin. The weekly candle closed in the form of a “morning star” reversal formation. This may be a good sign for a local price bounce.

We expect the market sentiment to turn positive this week. And this can lead to a local rebound to the $35,000 area. This means an increase of about 10% – 12% from current levels. Most likely, altcoins will follow the first cryptocurrency and this may lead to a local alt-season. It will be possible to finally talk about this at the end of the week, when the market trend finally becomes clear.