The past week was negative for the entire market. Bitcoin fell 7.5% and dropped below $32,000. As a result, its capitalization again dropped below $600 billion. Trading volume also dropped significantly and amounted to $17 billion over the past day. The market is slowly declining amid a lack of liquidity and interest in the crypto industry from the general public.

Last week, important news came from China. The central bank of this country has published the first whitepaper of the digital yuan. This document says that in this way, China is preparing for the transition to the digital age. In addition, the creators of the document indicated that the cryptocurrency market is extremely risky and volatile, which is why it is irrational to use them as a means of payment. In fact, the digital yuan will become an analog of cash with all the advantages of cryptocurrencies.

Following this policy, the government of this country continues to tighten the rules regarding mining. The State Grid Corporation of China is demanding that cryptocurrency mining be banned, and all power grid companies are required to stop supplying electricity to such companies. According to them, this is due to interruptions in the supply of energy in various parts of the PRC. According to preliminary estimates, about 90% of all mining devices have already gone to other countries.

The crackdown on Binance continues. Italy, Malta, and Hong Kong have stated that the crypto exchange is not licensed in these jurisdictions. The UK has previously stated this. At the same time, the work of the exchange in these countries was not disrupted in any way. At the same time, Visa and Mastercard will continue to cooperate with Binance despite pressure from regulators. According to them, they are closely monitoring the actions of the exchange for compliance with regulations.

The company’s management does not comment on this news in any way. They only said that they would close the project for trading tokenized shares on their platform. Users will be given 3 months to close their positions, or it will be done by force on October 15, 2021. Close sources claim that this is not due to pressure from regulators but to a reassessment of the company’s strategy.

From other important news, it should be noted that the largest decentralized exchange Uniswap has implemented the Optimistic Ethereum solution. This is an add-on over the main network, which allows you to reduce the commission for the exchange tenfold. In addition, all trades are now confirmed almost instantly, and there are no stuck or unapproved swaps.

One of the oldest projects among decentralized exchanges, ShapeShift, carried out a large-scale airdrop of Fox tokens among platform members. In total, over 1 million addresses took part in this distribution. The CEO of Eric Voorhees announced that the project is moving to decentralized management.

Jack Dorsey intrigued the public again. The CEO of Twitter and Square announced that he is preparing a new large-scale project related to the infrastructure of the crypto market and, first of all, Bitcoin. He did not give any details but said that in the near future, he would tell about it in more detail.

From the negative news this week, we mark another hack of a major project in the DeFi segment. This time, hackers hacked THORchain and were able to withdraw $5 million worth of Ethereum coins. Moreover, their costs for this operation amounted to almost $1.4 million.

The pressure from China on mining and regulators on the Binance crypto exchange has affected the entire crypto market. Many coins fell by tens of percent. Let’s take a look at the first cryptocurrency, Bitcoin, and see if we should expect another decline this week: 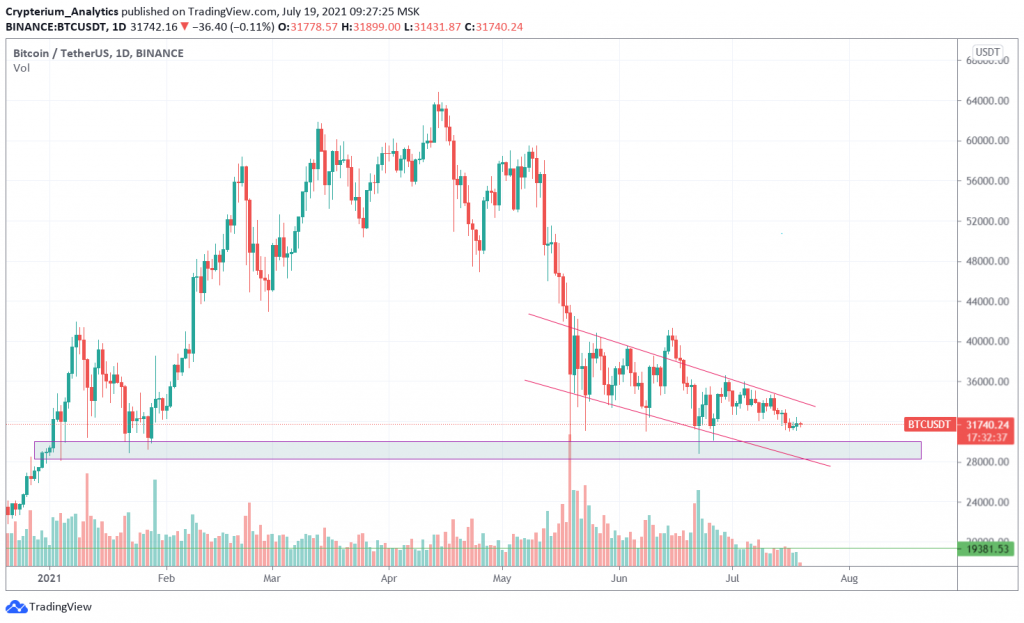 Almost nothing has changed on the chart. As we expected, Bitcoin dropped last week and continues to move in a downward channel. New volumes were not included, and this can be seen on the chart. This indicates continued weakness in the market.

In addition, the candle closed very badly on the weekly timeframe. This indicates a continuation of the fall, along with other signs. Considering all these factors, it is highly likely that the chart will dip below $30,000 this week. Depending on the market reaction to this event, it will become clear whether to expect a reversal in the near future.

Follow our materials, and then you will stay up to date with the latest events and will be able to adjust your trading strategy.