Last week, the Bitcoin value remained almost the same at slightly above the $39,000 level. Meanwhile, the volatility on the crypto market has been quite high in the last 7 days. So, the price of Bitcoin rose to $43,000. Altcoins showed a similar dynamic as that of the first cryptocurrency.

One of the most notable news was the imposing of sanctions against Russian residents by the Binance exchange. The exchange has banned all users whose balance exceeds $10,000 from using its products. This caused a massive outflow of funds from Binance. At the same time, the company noted that it continued to monitor sanctions against Russia and, if necessary, will definitely apply them.

Another big announcement was the release of an algorithmic stablecoin called USDD on the Tron blockchain. The stablecoin will be launched next week, on May 5th. The Tron DAO organization will manage this project. It will also maintain an annual yield of around 30%. The founder of Terraform Labs, Do Kwon, expressed support for this initiative and noted that each blockchain should have its own algorithmic stablecoin.

At the end of last week, it became known that Twitter had integrated the USDC stablecoin to its platform with the help of Stripe. From now on, content creators will be able to choose to receive rewards and get paid out in USDC. The Polygon blockchain will be used for making transactions. The company explained this decision by the fact that Polygon’s commissions are the lowest on the market and the network is compatible with most Ethereum addresses.

Several pieces of news came from the largest US exchange Coinbase. The company has launched a beta version of its own NFT marketplace. At the moment, a limited number of users have access to the platform. So far, it supports only Ethereum, but the company’s plans are to integrate other blockchains as well in the future. A few days after that, TheBlock reported that Coinbase was going to buy the Turkish exchange BtcTurk for $3.2 billion as part of the strategy to expand its presence in developing countries.

Another big attack took place in the DeFi segment. This time, the Beanstalk Farms protocol suffered from a hacker who used a series of instant loans and initiated a proposal to the protocol with the vulnerability. The proposal was accepted, and the hacker managed to withdraw over $75 million. The received funds were sent to the Tornado Cash DeFi mixing service.

Against the background of all these events, Bitcoin rose to $43,000 first, and then fell to $39,000. Let’s take a look at the chart and try to figure out what direction the asset will take in the coming week: 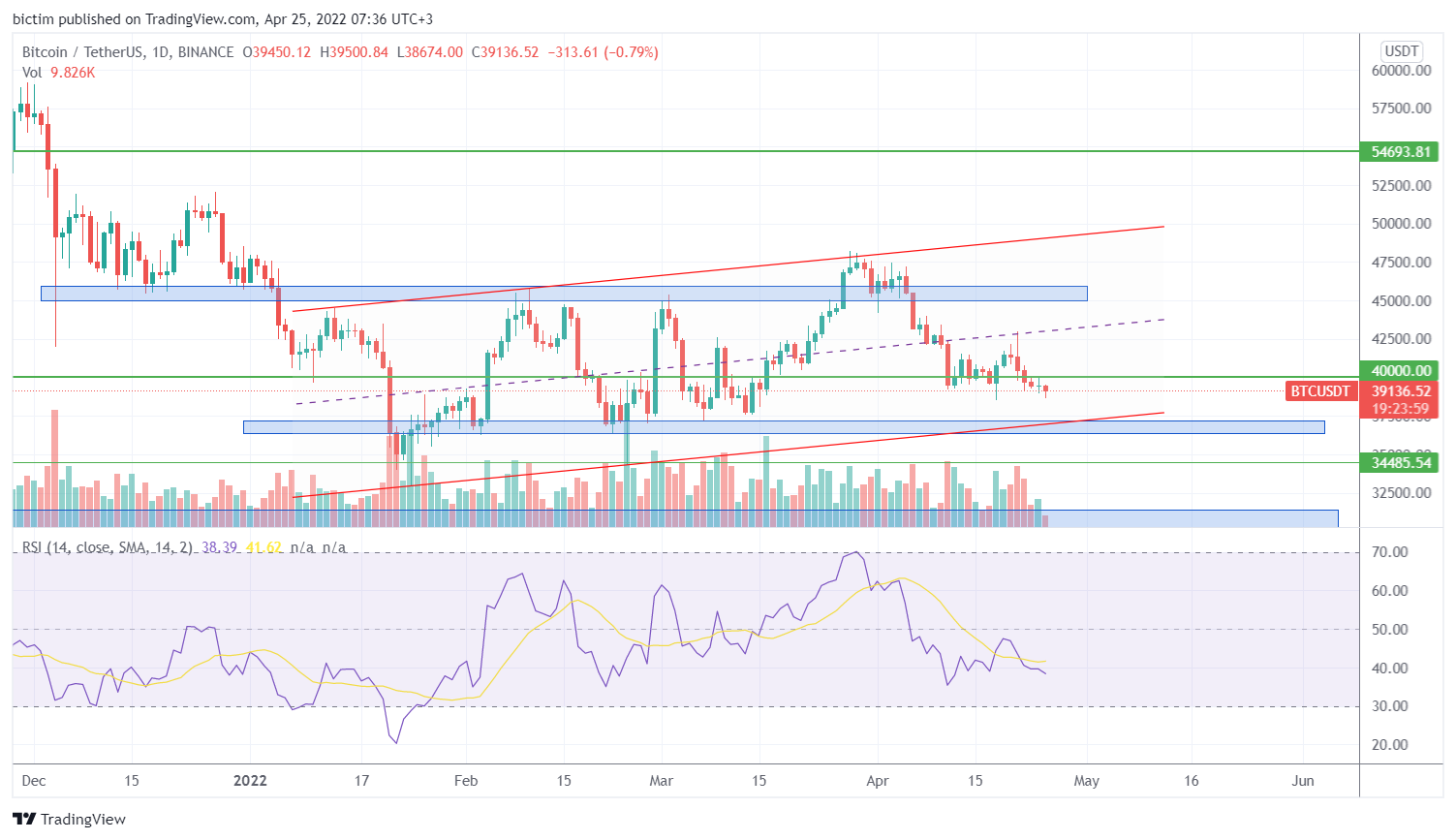 In the first half of last week, the price of Bitcoin rose by almost 10% and reached $43,000. This mark corresponded to the middle line of the three-month rising channel. At that moment, sellers have already stepped in and seized the initiative. This happened after the speech of Jerome Powell, who announced that an interest rate will probably increase by 50 basis points at once in May. This affected both the stock and cryptocurrency markets which fell into correction.

At the moment, the closest target for the BTC price is the $37,000 mark, which acts as a strong support level and the lower boundary of the rising channel. We expect to see the price declining to this zone, which will be followed by an upward reversal. The opposite scenario is the daily candle consolidating below $36,000.

The weekly chart has formed the doji candle which also signals a positive trend to start in the coming weeks. Therefore, we believe that further growth of Bitcoin is more likely to come into reality in this phase. But before that, we are waiting for a short-term descent to the above-mentioned area.

Also this week, the monthly candle will close. If this happens while Bitcoin is sitting at the current levels, it will be extremely bad for the asset and the market as a whole. We suggest that buyers will become very active when the price approaches the range of $36,000 – $38,000.