Crypto Weekly: Bitcoin price settled at around the $49,000 mark Over the past 7 days, the Bitcoin price almost did not change and settled at around the $49,000 mark. Although the trading volumes are low, the power of the Bitcoin network continues to grow. Moreover, the BTC hashrate almost reached an all-time high, breaking the level of 190 EH/s that was last seen prior to the general collapse of the crypto market in May 2021. Since then, the power of the Bitcoin network has been on the uptrend and now it is as close as possible to the previous highs. Most likely, the BTC hashrate will experience new peaks by the end of the year.

An important event for the crypto industry took place in the US Congress. Hearings on blockchain technology and cryptocurrencies were held in the House of Representatives. The reports were presented by directors of the largest cryptocurrency companies, such as Coinbase, Paxos, Stellar, Circle, FTX, and Bitfury. After the meeting was over, the speakers noted that the parliamentarians’ rhetoric regarding the crypto industry has changed. According to them, the governing bodies are now interested in cryptocurrency technology and want to understand how it operates.

Another positive news came from the world’s largest payment company Visa. Its leaderboard announced the launch of a separate advisory body to help customers deal with cryptocurrencies. Among its clients, there will be various financial institutions, retailers and other companies. Visa plans to provide a wide range of services, from deploying tokens to exploring the NFT sector. Thus, the corporation plans to go beyond the payment business and wants to support the mass adoption of Bitcoin and other cryptocurrencies through delivering consulting services.

The world’s largest cryptocurrency exchange, Binance, plans to obtain a license to trade in the UK. This was announced by the company’s CEO Changpeng Zhao. In order to achieve this goal, they need to go through a full check, promote KYC and AML rules, as well as to open the UK office. We recall that a few months ago, the UK financial regulator banned Binance from any crypto activity without its express approval.

China is on the warpath again. This time around, the Chinese Communist Party posted a statement that the NFTs and the metaverse are potential ponzi schemes and represent a big bubble. They believe that currently there are many signs pointing to a possible collapse in this segment, as many NFTs are trading at unreasonably high prices.

Meanwhile, the creator and director of Microsoft Bill Gates claimed that the meta-area has huge benefits. Moreover, he believes that they can squeeze companies, like Zoom and Skype, out of the market because metaverse has a format of presence. As a reminder, Skype video calling service belongs to Microsoft.

Despite numerous positive news stories, the cryptocurrency market has not shown significant changes in the past week. This is probably due to the massive liquidations that took place in early December. Let’s take a look at the Bitcoin chart and try to understand in which direction it will go this week: 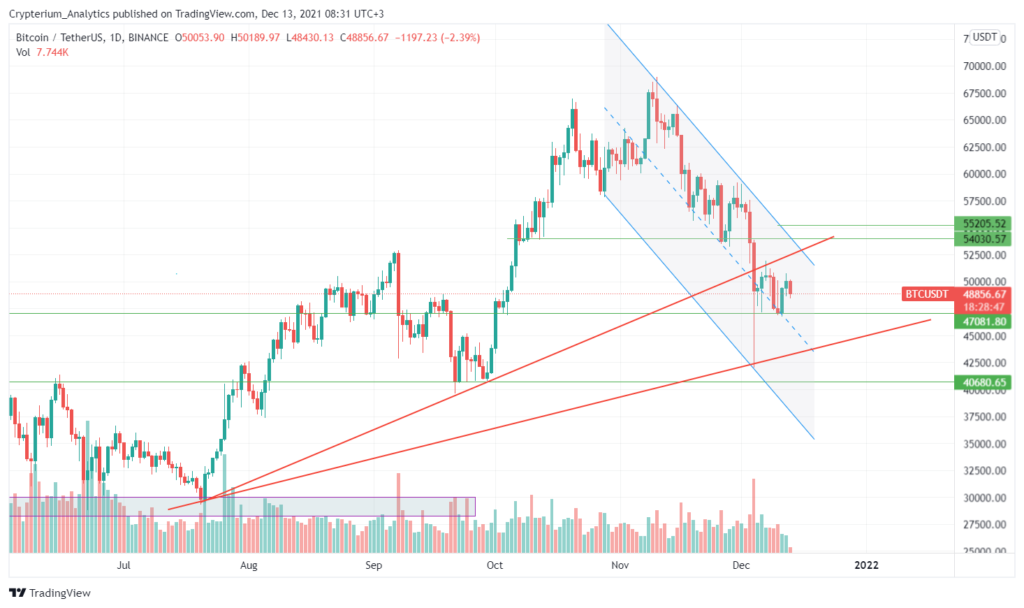 Over the past week, the Bitcoin price has been moving in a sideways channel between $47,000 and $51,000. There were no significant changes to the chart during this time. As of today, the price is in a large descending channel, which reinforces negative price expectations. If the chart breaks the $47,000 support level and then consolidates below it, we may see a new cycle of drop.

The weekly Japanese candlestick closed low. The figure has large shadows and a small body, which indicates a strong market volatility and uncertainty. As a rule, this speaks in favor of a further decline, as market participants are in no hurry to enter purchases.

In addition, there are some other signals for a new fall that may not be as dramatic as 10% – 12%. But, nevertheless, we expect Bitcoin to go down to the $43,000 – $44,000 area within a week. This will correspond to the centerline of the descending channel and the new trendline.

Note that the last week’s launch of micro-futures on the Ethereum network did not have a strong impact on the market, as bearish sentiments reigned among the market participants and the fear is at a critically low level.