Last week, it became known that BitMEX, which was previously the largest crypto-derivatives exchange, would release its own token in February 2022. Everyone can get it for registering and completing KYC, as well as for using the referral system. The token will provide discounts on commissions. The token trading will begin in the second quarter of 2022 after the launch of spot trading on the BitMEX exchange takes place.

Big news came from the Dogecoin Foundation. The organization is engaged in promotion of Dogecoin and development of its official site. This time, it was reported that this blockchain planned to switch from PoW to PoS algorithm. They see it as a more promising avenue and are going to eliminate Dogecoin mining completely. The project is supported by Vitalik Buterin, who will help this blockchain change its initial algorithm.

The largest exchange Binance has upgraded the procedure of burning its own BNB coin. Previously, the exchange did it manually, but now the team will use an automatic burning mechanism. The amount of burned tokens will depend on the BNB price and the number of mined blocks. According to the company, this will contribute to increasing the transparency of incineration operations.

One more news story came from another largest exchange, Kraken. The management team has completed the acquisition of Staked, which specializes in staking assets with the PoS algorithm. Financial details remain unknown, but as the company states, this is one of the biggest deals in the history of the crypto industry. Also a little later, Kraken announced that it would make its own NFT platform that would allow users to lend against NFT collateral.

The world’s largest decentralized exchange, Uniswap, has integrated a Layer-2 solution for Ethereum and will now support the Polygon (Matic) network. There have been some rumors regarding this event for a long time. Amidst this backdrop, Matic set a new all-time high of $2.92.

Let’s take a look at the chart of the first cryptocurrency and try to understand whether it continues to grow until the end of the year: 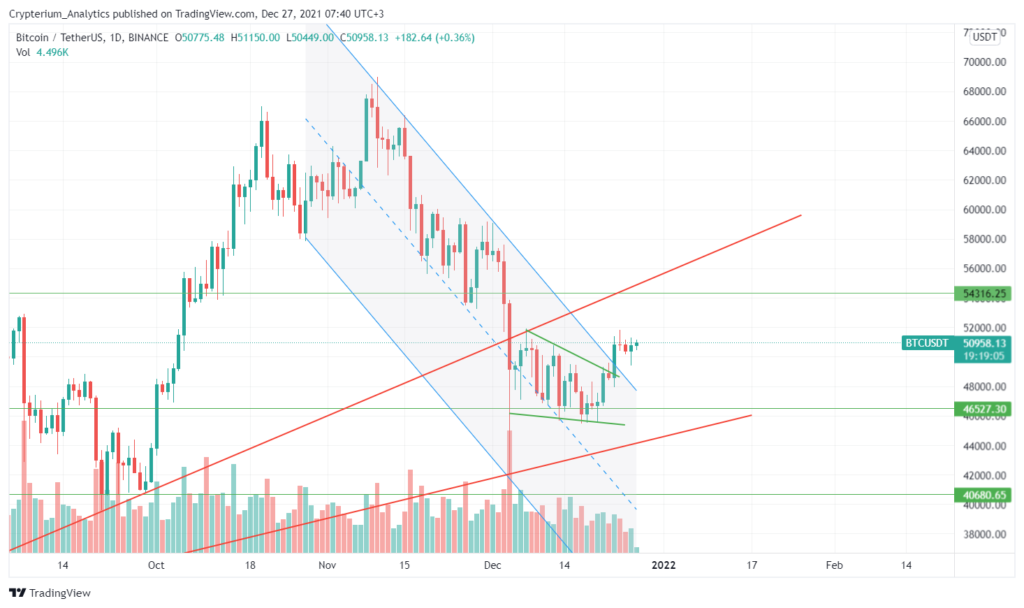 Last week, Bitcoin managed to leave the descending channel where it had been staying for two months and consolidated above it. Earlier, we mentioned that Bitcoin had formed reversal patterns and we occurred to be right as the price was further rising steadily.

Bitcoin has seen little to no significant changes in the past 4 days. This is most likely due to Christmas, as many market participants chose to leave the market for this time. However, this is a positive sign, as Bitcoin has actually entered the accumulation zone at around $50,000.

In the coming week, we expect the first cryptocurrency to demonstrate new upward movements in the $54,000 – $55,000 area, based on many chart formations. This will most likely happen before the New Year.

Altcoins are now moving more strongly. Many of them have shown strong upward dynamics over the past week. Therefore, we expect a general rise to take place in the market in the next 4-5 days.