Last week, Bitcoin fell by almost 9% to below the important psychological level of $40,000. As early as Friday, we warned that such a scenario is likely to take place and turned out to be right. Altcoins also declined significantly during this time. Meanwhile, there was no notable news that directly affected the Bitcoin price this week.

What really attracted attention at the end of the last week were rumors of a massive $200 million OpenSea hack. But as it turned out later, it was not a hack itself, but the attacker used a phishing site. In addition, he created his own contract, similar to that of OpenSea, and was searching for his victims during a month. As a result, once the NFT marketplace had moved to a new smart contract, the fraudster took advantage of social engineering and managed to steal $1.7 million worth of NFT tokens. The OpenSea CEO stated that the project did not have any exploits and all illegal actions were made through a fake site.

A lot of this week’s news pieces were related to finance. For example, the Graph project set up a $205 million fund to support developers. Money were allocated by some of the largest venture investors. This sum will be used to support teams that create DApps using The Graph technology. Developers can represent the DeFi, NFT or MetaFi sectors.

Another big news story came from major venture capital firm Sequoia Capital. This company created a separate inner structure called Sequoia Crypto Fund. The management plans to raise funds of about $500 – $600 million and invest them in crypto startups, which will allow entrepreneurs to better focus on the crypto industry and better manage projects here.

USDC stablecoin issuer Circle has agreed the new reverse merger terms with Concord in a SPAC deal. Under these conditions, Circle’s valuation has doubled in six months, from $4.5 billion to $9 billion. Such a big revaluation is associated with a large growth of the company, as well as with a significant increase in turnover of the USDC stablecoin. In addition, the USDC capitalization has grown to $52 billion and now it is rapidly catching up with the six-months USDT capitalization.

One more interesting event is related to Binance Smart Chain. The ecosystem will be renamed the BNB Chain to highlight the wider use of the BNB token, which is no longer just an exchange coin. Also, the community approved that it would move toward GameFi, SocialFi, and MetaFi. The parent company of this blockchain, Binance, announced a major new partnership with the Alpine team from Formula 1. In honor of this collaboration, the exchange will release another fan token on its launchpad.

Let’s take a look at the chart of the first cryptocurrency and try to figure out what to expect from the market in the coming week: 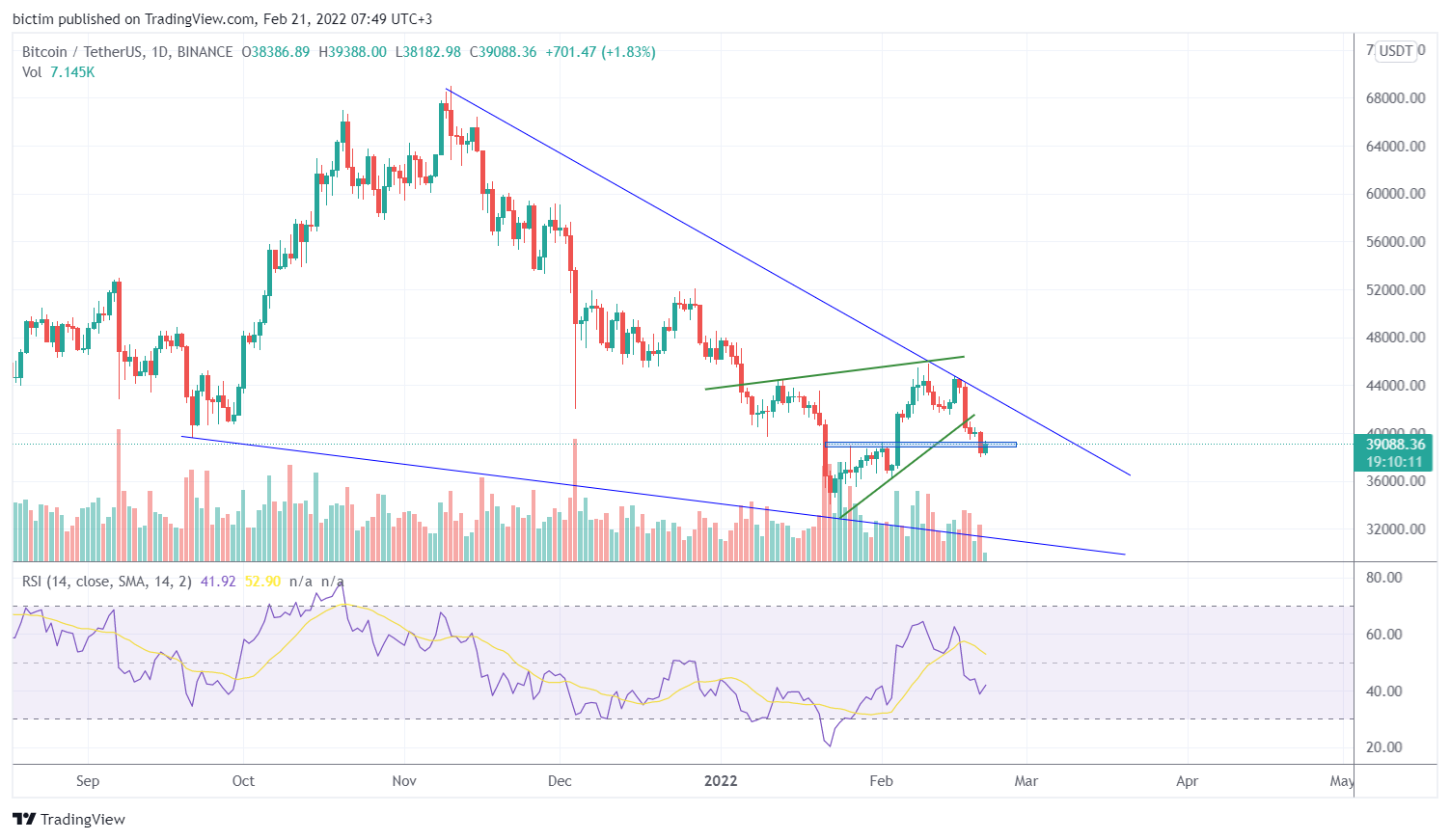 Last week, we already mentioned that a descending pattern appeared on the chart. Now, it has already started to work out. There are still no buyers on the market, which can be seen from the 4-hour chart. Over the weekend, the volatility has decreased immediately by 2-3 times and the price has entered a narrow area of $39,700 – $40,400.

The chart also reached a downtrend last week and then bounced down. This confirms the fact that buyers have no strength to break it at the moment.

Based on this fact, we assume that Bitcoin will continue to decline in the coming week. The support boundary may be the $30,000 level. That’s probably where the price will go. Following Bitcoin, altcoins also have all prerequisites for a new cycle of decline.