All these falls are associated primarily with negative news from China. At the beginning of the week, it became known about the problems of the largest developer in China – Evergrande. This situation provoked a fall in both cryptocurrency and stock markets in all parts of the world. The beginning of the week was negative. A few days later, the Chinese government helped the company to temporarily resolve their problems, but this did not affect the market in any way.

Before the weekend, there was an even larger drop due to the negative attitude of the Chinese government towards cryptocurrencies. It became known that China will oppose mining and prohibit the exchange of cryptocurrency on its territory. This directly affected some of the world’s largest exchanges – Huobi and OKEx located in China. The share of citizens of this country at these sites ranges from 70% to 80%. As a result, the tokens of these exchanges fell by almost 50%. Binance also responded by banning the registration of Chinese citizens on its site.

New hacker attacks only exacerbated the negative sentiment on the crypto market. This time, attackers hacked the Vee Finance protocol on the Avalanche network and were able to withdraw $35 million. As a result of another hack, the target of which was the pNetwork protocol, hackers withdrew 277 Bitcoins (more than $10 million). In addition to this, a few days later, scammers hacked into the official site of the Bitcoin community – Bitcoin.org. The resource owners were able to restore access the next day.

All this had an extremely negative impact on the market. The positive news went unnoticed. One of these was the news from Twitter. Now, this social network supports donations for authors in the form of Bitcoin. Transactions will be done using the Lightning Network. At the moment, this function is available for iOS owners, but in the next 2 weeks this functionality will be implemented for Android as well.

That being said, this week, many projects from the crypto industry have raised new rounds of investments worth hundreds of millions of dollars, including Dapper Labs, Sorare, DeSo project from the founder of the Bitclout network, mining company Genesis Digital Assets, and node-rollout startup Blockdaemon. The total investment in these companies exceeded $1.5 billion in a week. It is one of the best results in the history of the cryogenic industry.

However, this did not help the crypto market return to its previous levels. Many assets fell by tens of percent and market participants are in a panic state. Let’s take a look at the Bitcoin chart and try to guess how it will behave in the next week: 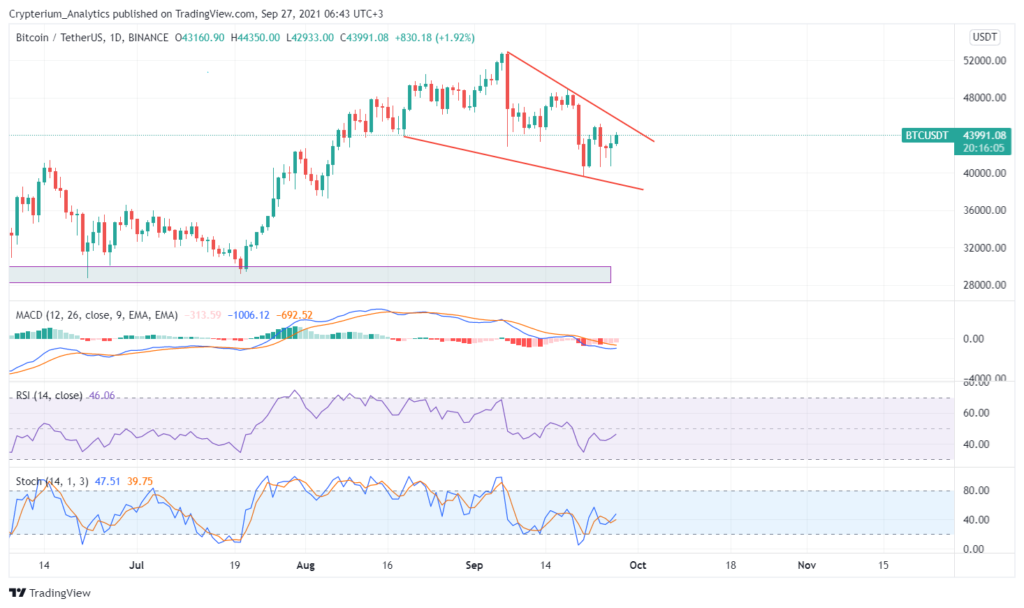 The chart shows that in the last 3 weeks, Bitcoin has gone into a downtrend. Sellers have begun to realize their profits and currently dominate buyers.

All this adds confidence in growth in the coming week. The key level for Bitcoin will be the $45,000 mark. If the price can gain a foothold above this level, then the chart may show significant growth and update local highs.

In addition, the monthly candlestick will close in the coming week. According to statistics, it is known that this is the most unfavorable month for Bitcoin. In most cases, during this period of time, the first cryptocurrency fell in value. This month is no exception.

Based on all this, we expect to see a recovery in the market this week. Bitcoin will set the direction of movement, and altcoins will follow it. In this case, the dominance of Bitcoin in the market will continue to increase.