Over the past week, Bitcoin has crashed by 23% and this has led to a strong decline in the entire cryptocurrency market. In just one week, the total capitalization of the crypto market has decreased by $160 billion and currently stands at $880 billion. The last time we observed such values ​​was in early January 2021.

The fall was due to a series of events. First, there was a depeg of a stable exchange rate in the stETH – ETH pair by 6.5%. This event was provoked by the Alameda fund, which sold 50,000 ETH in one order on the Curve decentralized exchange. This led to a panic in the crypto market and many traders and investors began to sell Ethereum in a hurry.

Decoupling in this liquidity pool has caused many leveraged stETH strategies to falter and lead to liquidations. The loudest were the problems of Celsius, which pawned Bitcoin under such strategies. Due to these problems, this company has closed withdrawals. Within 3 days, the protocol lowered the liquidation point from $22,000 to $14,000. At the same time, the project’s token collapsed immediately by 70%.

A similar situation happened with one of the most famous funds in the cryptocurrency market – 3 Arrow Capitals. The company was a large holder of Ethereum and placed it in credit protocols to obtain liquidity in new strategies. As a result, it became known that the liquidation price of these positions was $1,042. At the same time, within a few days, the wallet further reduced the level of liquidation. It is not entirely known what happens to the funds of this fund, but major exchanges BitMEX, Deribit, FTX and others have announced margin calls from 3 Arrow Capital that have not been covered. What’s more, the hedge fund owes money to some of the cryptocurrency exchanges.

In addition, many other companies and hedge funds went into liquidation. Many DeFi projects have received liquidations and margin calls that have caused their TVL to drop significantly. 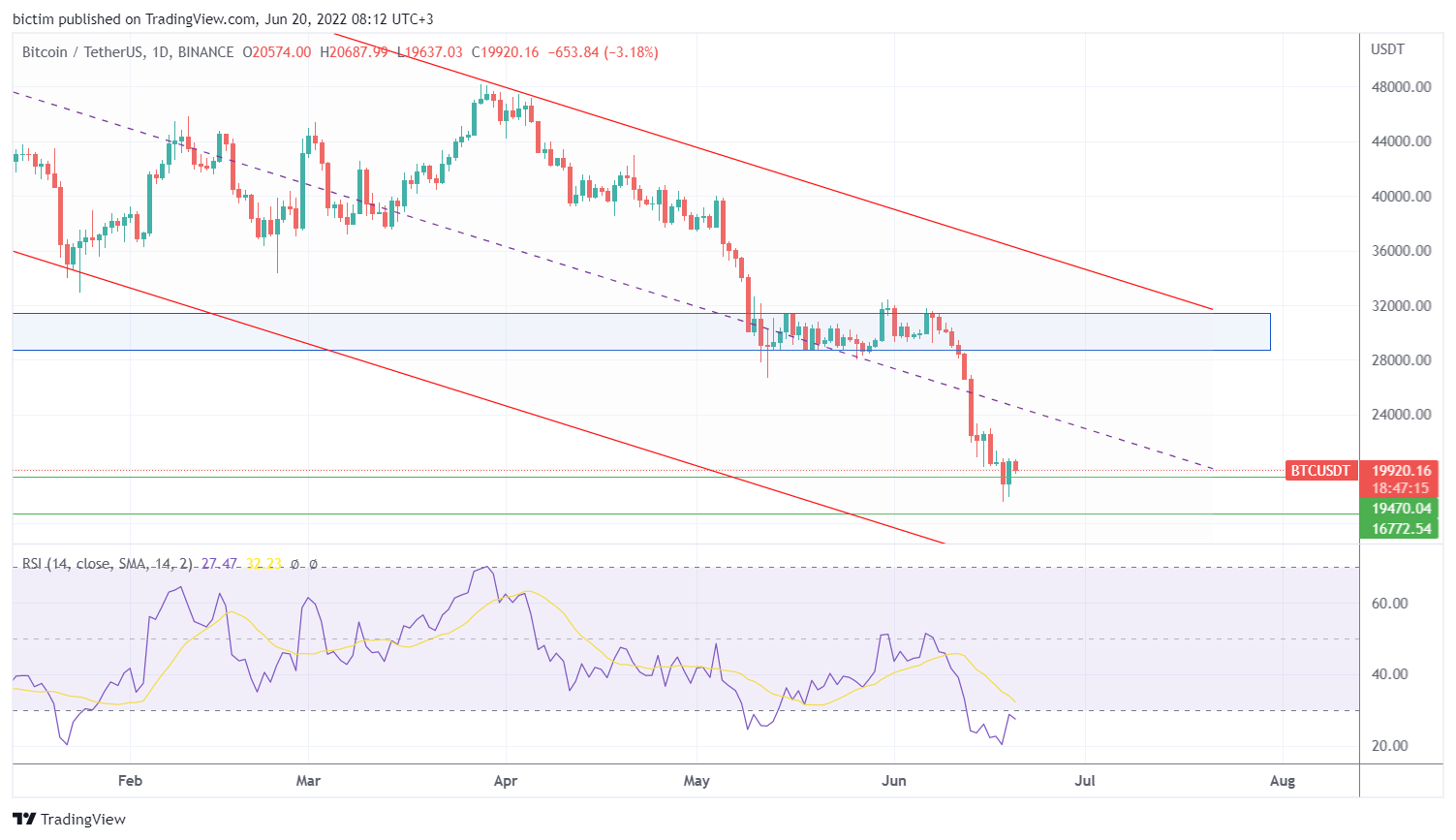 The Bitcoin chart went through the $23,000 – $29,000 range quite quickly and slowed down around $22,000 for the first time. After that, the price slowly declined to the $20,000 area and has remained there for the time being. Note that this is an important psychological level, near which a strong struggle unfolds between buyers and sellers.

At the same time, the structure of the chart indicates that the fall has not yet ended. It is very likely that already this week we can see another strong fall. It is rather difficult to say to what levels the price can reach this time. However, there is a high chance that Bitcoin will move into the $16,000 – $17,000 range. If buyers fail to maintain this level, then the collapse of the first cryptocurrency can be very large and swift up to $13,000. However, this option now seems the least likely.

The altcoin market in this case may fall even more. Obviously, we are now witnessing one of the key phases of movement in the cryptocurrency market. The current situation is similar to the situation a month ago with the collapse of Luna/Terra. All this is exacerbated by the negative situation in the stock markets. In this regard, it is not worth counting on a rebound within the current week.