The cryptocurrency market showed significant growth last week. Its total capitalization increased by 12.5% ​​or $270 billion. At the same time, the growth of Bitcoin was almost 2 times lower and amounted to 7.5% per week. Only a few coins from TOP-100 showed negative dynamics over the past 7 days. But what caused this market growth remains unclear.

Perhaps this is due to the high excitement around the NFT segment. It got out that the trading volume on the largest NFT marketplace OpenSea amounted to over $3 billion in August. At the same time, back in July, this indicator was slightly more than $300 million. This means that the trading volume has grown almost 10 times in 30 days.

Against the backdrop of such demand, the head of the OpenSea platform, Nate Chastain, announced that the project did not have enough staff. According to his tweet, the project has grown tremendously over the past year and the current team members are not enough to serve the marketplace optimally. He announced that he would pay 1 ETH to anyone who can recommend an engineer or designer that OpenSea would hire.

The pressure on the largest cryptocurrency exchange Binance continues. This time, Singapore and South Africa have included the exchange’s domain on their “investor warning list.” In response, Binance said that will ban the use of the Singapore dollar completely on its platform and promised to remove apps from local GooglePlay and AppStore.

In addition, the CEO of Binance announced that he plans to conduct an IPO of the American division of the BinanceUS exchange. He stressed that the company plans to show steady growth and will soon close a new round of private financing. At the same time, he noted that he is considering an IPO in about 3 years. This can be strongly influenced by a bear market.

Important news has emerged regarding the decentralized finance segment. The largest DEX, Uniswap, became the subject of SEC research. So far, there are no complaints about the project and the regulator is simply studying information about Uniswap and how investors interact with it. At the same time, SEC is also studying other projects from the DeFi sector. According to some publications, this could be part of a broader initiative aimed at regulating this segment.

At the same time, hackers continue to actively break into DeFi protocols. This time, the attack targeted a major project, Cream Finance, which lost $18 million in the attack. The project promised to reimburse the entire amount to the victims at the expense of future commissions. Note that this is not the first attack on this project. Six months ago, hackers were able to withdraw almost $40 million from the project’s repositories.

However, these negative events failed to affect the market. Most cryptocurrencies have shown steady growth, including Bitcoin. Let’s take a look at the chart of the first cryptocurrency and try to figure out which direction the price will go this week: 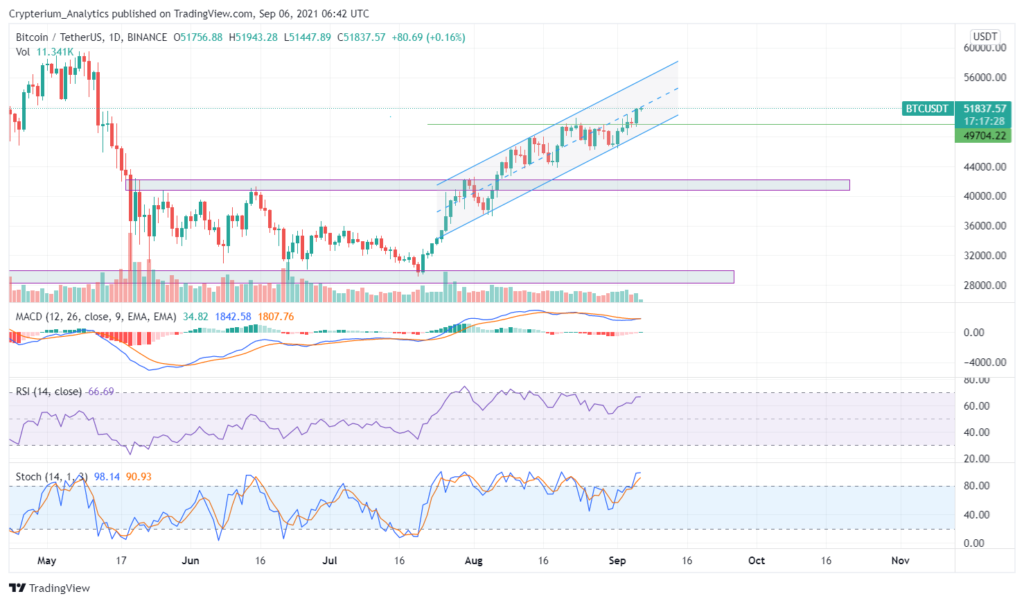 The chart continues to move in an ascending channel and came to the middle line just yesterday, which is a local resistance level. At the same time, strong candlestick patterns were formed on the chart last week. This indicates continued growth.

In addition, there are some other signs that are pushing the Bitcoin price upwards and we think that the chart can rise by 8% – 10% all the way up to $55,000. This will be a key point in many ways since it is here that the upper border of the channel will pass.

Following Bitcoin, other altcoins may also grow. This is evidenced by the dominance of the first cryptocurrency, which has been declining over the past 7 days. Use AI Price Predictions for altcoins if you don’t want to miss the beginning of the altcoin season.