Over the past week, the price of Bitcoin has risen by 3% and is now trading at about $40,000. At the same time, yesterday the price of the first cryptocurrency was in the range of $41,000 – $42,000, but sellers were able to lower the price. Altcoin market, on the contrary, shows growth and increases its dominance on the market.

A lot of news came from Binance this week. Regulatory pressure on this exchange continues to intensify. This time, Malaysia has announced that the company will disable support for the website, application and telegram channel for residents of its country. A little later, it became known that India initiated an audit of Binance regarding its role in money laundering.

Due to numerous claims against Binance, several funds have already refused to interact with it. The management of the crypto exchange also began to take some steps. One of them was the reduction of the maximum possible leverage to x20 at futures markets. Moreover, the exchange announced that it is phasing out crypto derivatives trading in Europe for 3 months.

In addition, the platform has reduced the withdrawal limit from 2 Bitcoins to 0.06 Bitcoins per day for unverified users. Also, the company is going to introduce a new service to fulfill tax obligations in all countries in which the crypto exchange is represented.

Any other important news? One of the largest crypto exchanges, Huobi, is closing a legal entity in Beijing due to Chinese pressure on the crypto industry. Because of this, the largest mining pool, Antpool, will be sold and withdrawn from China, as well as spun off from Bitmain. This is very important news for the entire mining industry, which points to the final exodus of miners from China.

The mining crisis that has erupted in the last 2 months seems to be coming to an end. For the first time since May 2021, the difficulty of the Bitcoin network has shown an increase. This was expected, since the hashrate began to grow again in July and increased by 50% from its minimum in June 2021.

The birthday was celebrated by the Ethereum blockchain network, which turned 6 this week. Throughout the history of Ethereum’s existence, its network has processed $3.6 trillion in transactions. At the same time, a third of this volume fell in 2020, which indicates a significant increase in the popularity of this asset.

Another positive news for Ethereum and the entire cryptocurrency community is the fact that the largest bank Goldman Sachs has applied for ETFs based on public companies associated with the blockchain and the DeFi sector. According to the document, the bank will personally invest in these companies at least 80% of the index fund’s capitalization.

Let’s take a look at how this news affected the chart of the first cryptocurrency and try to predict the further direction of the Bitcoin price movement: 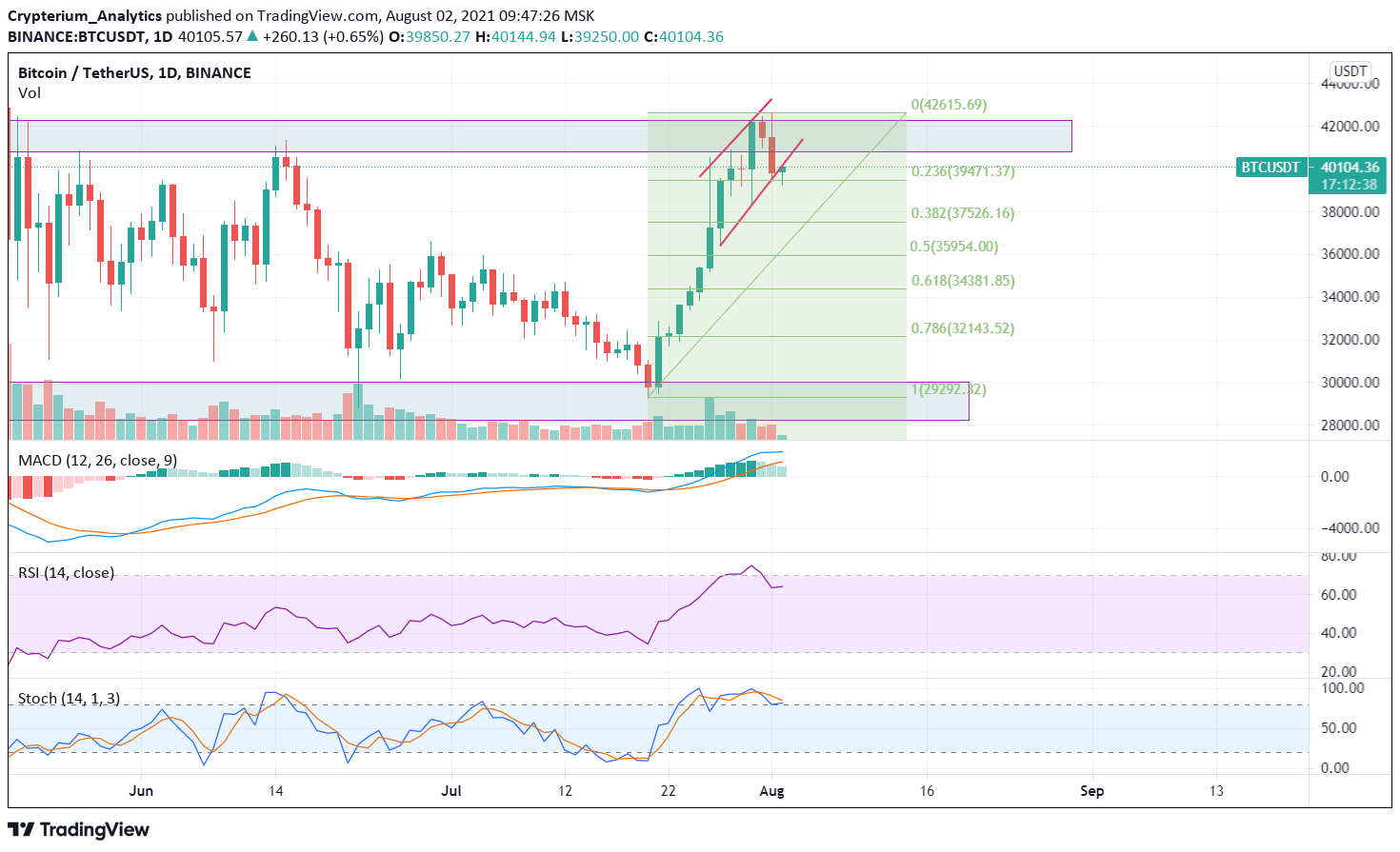 At the moment, the chart is still in a wide sideways channel at $30,000 – $42,000. The price hit the upper boundary and bounced down as many sellers started selling their positions near this level.

Nevertheless, an upward channel has formed in the last week, which is more clearly visible on the 4-hour timeframe. Now the chart is moving near its lower border. If the price fixes below it, then Bitcoin may decline to the 0.38 Fibonacci level, which corresponds to the $37,500 mark.

Cancellation of this scenario will be price fixing above $42,200. In this case, Bitcoin will have a high chance of a reversal upward and could rise up to $48,000.