Last week, the Bitcoin price rose by 4% and the first cryptocurrency is now trading at $37,000. Meanwhile, altcoins remain in a downtrend, including assets from the Top-10 cryptocurrencies. So, the Bitcoin dominance increased by another 2% and currently stands at 43%.

No significant news has directly affected the price. However, a major conflict arose in the crypto community last week. It became known that the co-founder of Wonderland also was the co-founder of the QuadrigaX exchange which ceased to exist in 2019 and, as a result, its users lost $169 million. Moreover, this person has previously committed illegal financial actions. Despite this, he was part of the Frog Nation team, which stands behind the Abracadabra, Wonderland and Popsicle platforms. But after all these facts became public, the founder of Frog Nation asked him to leave the team.

The largest NFT platform OpenSea suffered from hackers who managed to access its exploit for delisting of NFT tokens and API keys. This allowed them to buy NFTs at much lower old prices and the attackers earned almost $2 million in this way. The OpenSea team has already reimbursed affected users.

But another project lost even more. The DeFi landing platform Qubit Finance built on the BSC network was hacked because of the cross-chain protocol vulnerability, which caused $80 million damage. Against this background, the protocol price collapsed by 26%. The project team is trying to contact the hacker and offer him a reward, but all attempts have failed so far.

One more big news story came from the Fantom blockchain team. During the voting process, it was decided to add the largest DeFi lending protocol Aave to this blockchain. The decision was supported almost unanimously. Fantom will provide assistance with the integration of Aave, as well as allocate incentive rewards in FTM tokens from the 6 million FTM pool.

Ethereum developers initiated abandonment of the ETH1.0 and ETH2.0 terms, which will be replaced by “execution level” and “consensus level”, respectively. Both these components will make up the Ethereum ecosystem. The rebranding took place due to many questions from the Ethereum users and the community regarding the compatibility of these networks and their viability.

Silvergate Bank agreed to acquire the assets of Diem – the project developed by Facebook – for $200 million. Last year, this bank was claimed to become Diem’s stablecoin issuer. However, these plans have finally failed due to constant regulatory pressure. Now, the corporation is going to get rid of the Diem project completely, after running it since 2018.

All in all, the market is still boring and empty. Let’s take a look at the Bitcoin chart and try to understand the direction it will take in the near future: 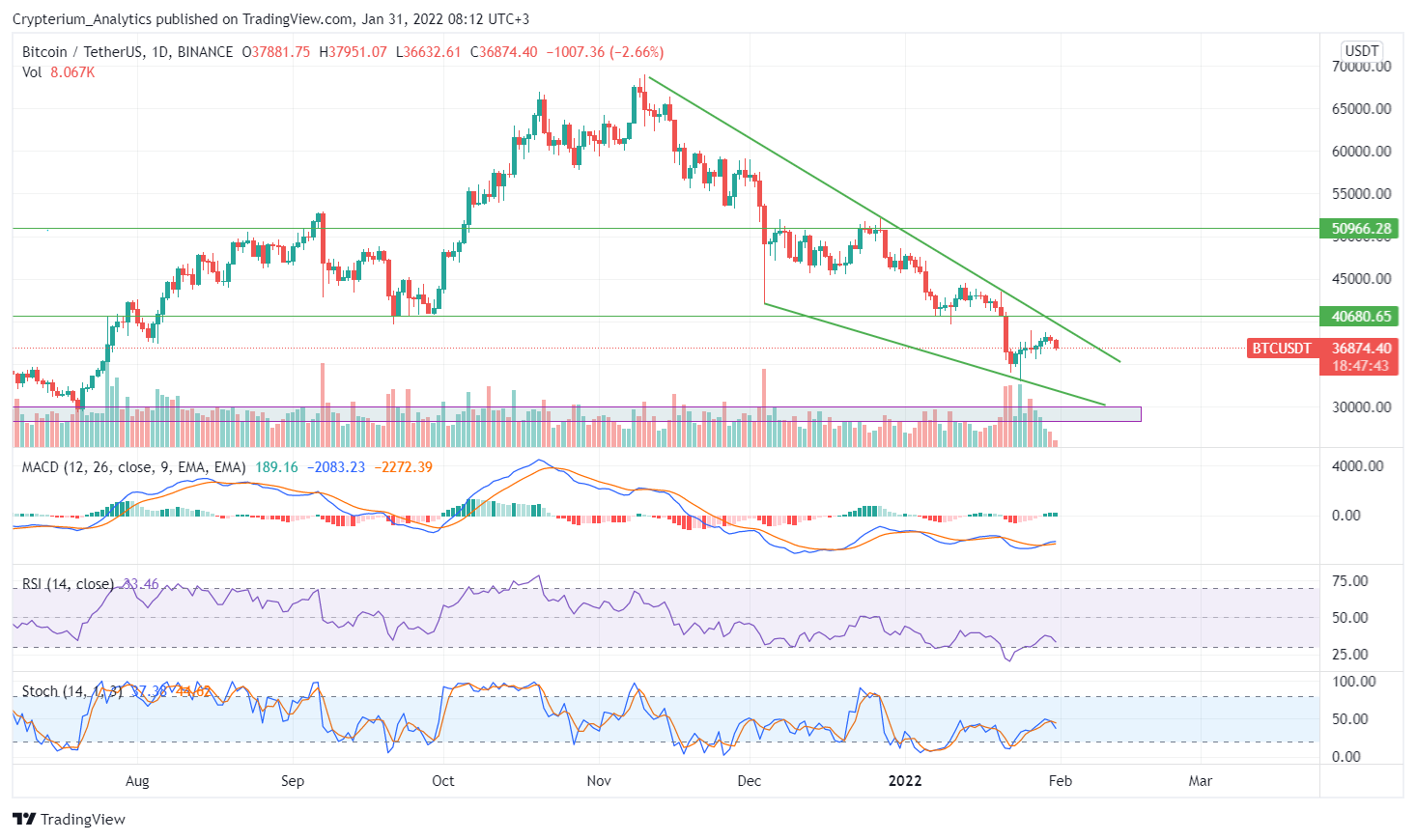 Bitcoin continues to move in a descending wedge. Last week, the price approached the upper limit, but over the weekend, the candles have indicated a local downward reversal. It is especially important to note that the current growth is not accompanied by an increase in trading volume. On the contrary, it is currently falling due to almost complete absence of market participants.

As a rule, this is when the price starts slowly declining. In this case, the most important resistance level would be $29,000 – $31,000, which is considered an optimal entry point. In addition, on the weekly chart, we can see that buyers are weak and sellers are having control over the market situation.

The monthly candle will close today. If this happens around $37,000, then it will mean that Bitcoin had lost 20% of its value in January. This would be the biggest drop since May 2021 and one of five worst monthly declines for the first cryptocurrency in the last 5 years.

And if it turns out to be true, then altcoins will collapse even more drastically. Therefore, buying them is extremely dangerous now as the capital will keep flowing away.