Absolutely all assets from the Top-10 showed double-digit growth and this is a good signal for the crypto industry. The past week was full of various news, thanks to which cryptocurrency charts began to recover.

The most notable news was the $611 million hack of the Poly Network protocol. This became the largest DeFi hack in history. This protocol combines three chains at once – Ethereum, Binance Smart Chain and Polygon. The hacker was able to withdraw hundreds of millions of dollars from each blockchain. However, a day later, the attacker began to return the stolen funds and even refused a $500,000 reward from the Poly Network team. This is the most unusual story associated with a hacker attack in the crypto industry.

A heated debate regarding the definition of crypto brokers and their taxation took place in the US Senate. The bill specified that this definition included miners, validators, node operators, wallet developers and liquidity providers. As a result, the bill was not approved and was sent for revision. If it were adopted in the existing interpretation, then this could provoke a massive departure of crypto projects from the United States.

XRP again became one of the most visible assets in the past week. The SEC continues to sue the company and has now filed a petition for access to the correspondence of Ripple employees in the Slack messenger. However, this is more like a time-wasting factor, as the SEC has been unable to prove XRP is security for several years. This is exactly what the crypto market thought, as a result of which the XRP price increased by 65% ​​and is currently $1.30.

Another big CFTC versus BitMEX case is about to end. The management of the exchange agreed to pay a $100 million fine for the creation of unregistered commodity exchange and the lack of KYC / AML regulations. At the same time, the charges against the founders of the exchange, including against Arthur Hayes, remain in force.

Positive news for the crypto industry came from Moore Cayman, which audited Tether Ltd funds. According to the report, USDT stablecoin is 100% backed by the company’s reserves. About half of them are securities and debt obligations. This proves the fact that the largest stablecoin in terms of capitalization has returned to the legalized channel.

All this news had a positive effect on the cryptocurrency market, the capitalization of which again exceeded $2 trillion. Let’s take a look at how the Bitcoin chart has changed and what to expect from it in the near future: 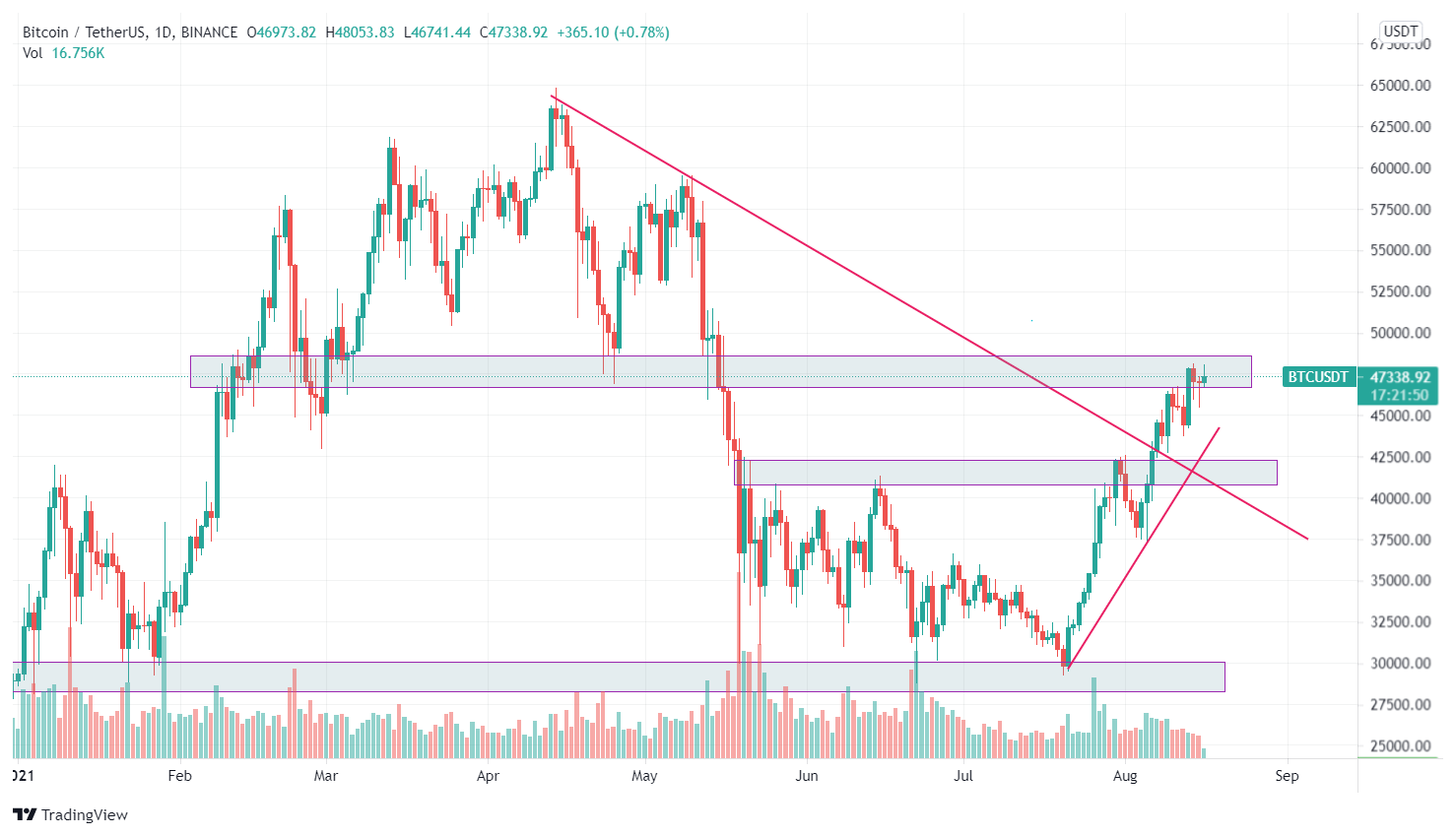 The chart came to the strongest resistance in the $48,000 – $50,000 range. It is clearly seen that buyers tried several times to break through this level and gain a foothold above it, but they did not succeed.

In addition, many indicators are already heavily overbought and bearish divergences have formed on lower timeframes. Additionally, the current chart structure forms a reversal pattern. Based on this, we expect to see strong volatility this week.