The past week turned out to be the most terrifying for the cryptocurrency market in the last few months. The Bitcoin price collapsed by 17% and reached $34,000. The capitalization of the entire market declined by $400 billion, or 20%, and currently totals $1.6 trillion, down to $2 trillion seen at the beginning of last week.

The fall occurred amidst the absence of any significant news or events and was, probably, due to the prolonged drop of the stock market. In recent months, the correlation between cryptocurrencies and traditional markets has become very strong.

Last week’s most discussed topic was the purchase of the largest game studio Activision Blizzard by Microsoft. The transaction amount was estimated at almost $70 billion, which should be paid within 1.5 years. According to the director of the company, this decision aims to support the development of metaverses through games. Thus, Microsoft indirectly confirms its own plans to create in-house metaverses.

Another major acquisition took place in the crypto industry. The largest NFT marketplace OpenSea bought the Dharma cryptocurrency wallet. This transaction will make it easier for many users to interact with NFTs, as the wallet infrastructure has already made great strides in this direction. Of particular interest is the fact that Dharma’s CTO will take up the same post at OpenSea. The transaction amount was not disclosed, but according to approximate estimates, it stands at $110 – $130 million.

Twitter keeps making waves in the crypto market. This time, the social network giant has integrated the feature that allows adding NFT to your profile picture if you link your Ethereum account to Twitter. For now, this option is only available for iOS users. Meanwhile, the company’s latest innovation has received a portion of criticism from Elon Musk, who claimed that the company was wasting engineering resources instead of solving real problems.

At the same time, the major market players increasingly fear that the crypto collapse may continue. Many large investors and hedge funds are talking about an imminent drop to $30,000. However, Fidelity predicted the states would start purchasing Bitcoin in 2022 as it will act as a means for hedging and insurance of state assets.

Immediately, there were two notable hacks that occurred last week. First, hackers unhooked the security system of the centralized crypto exchange Crypto.com and managed to withdraw $34 million in BTC and ETH. The company has already paid all damages and has established new security measures along with the launch of deposit insurance up to $250,000.

Another target of hackers was the cross-chain protocol Multichain developed by Andre Cronje. Perpetrators withdrew $3 million, thus affecting 445 wallets. One of the Multichain users lost $960 thousand but got it back after contacting one of the hackers and asking him to return the funds for a reward of 50 ETH. Recall that a month ago, this protocol raised $60 million in a seed funding round. A little earlier, Vitalik Buterin predicted an increase in the number of attacks on cross-chain protocols.

All this news had no impact on Bitcoin, which kept moving at its own pace. Let’s take a look at the chart of the first cryptocurrency and try to figure out what to expect in the coming days: 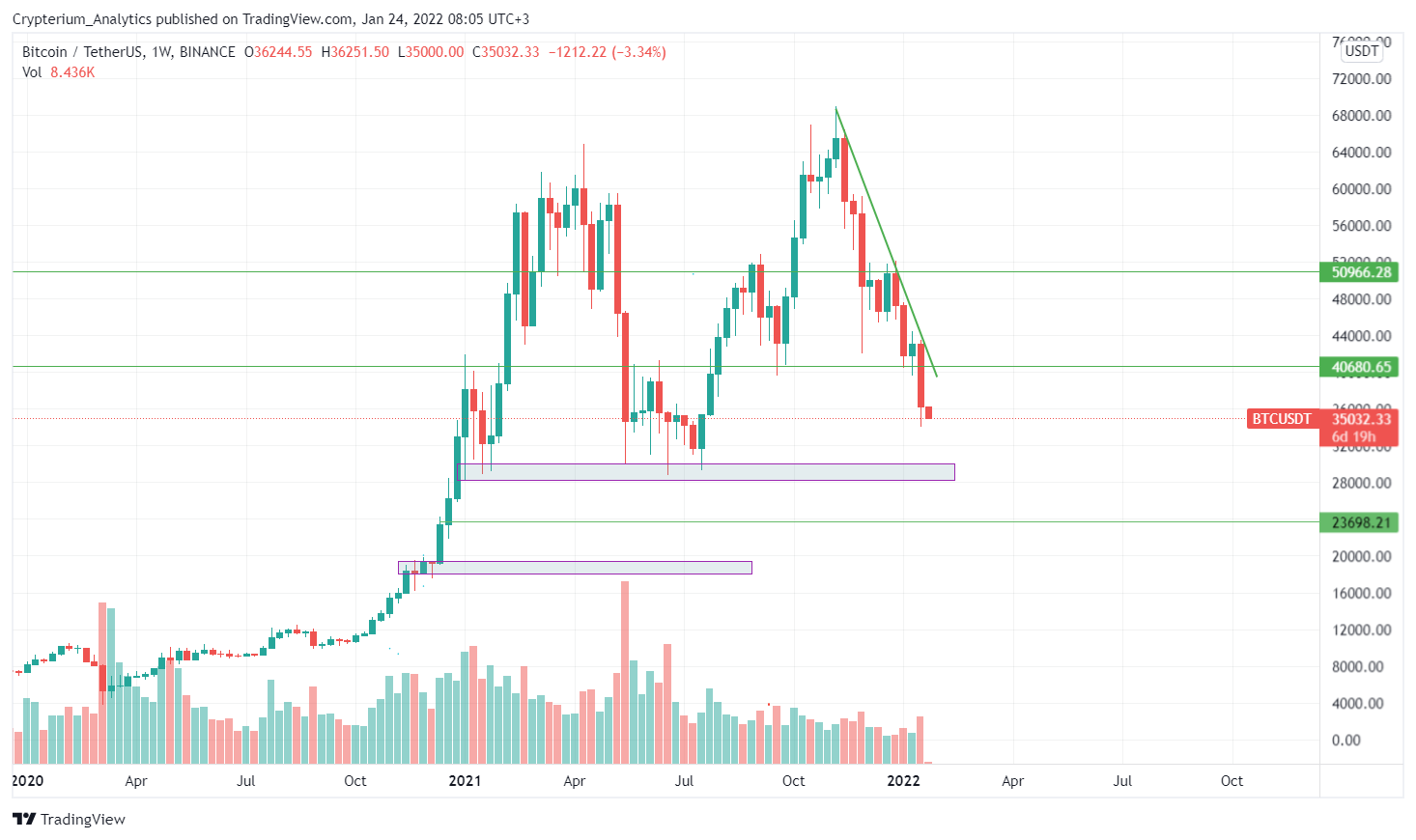 For the past 3-4 weeks, we have warned you that Bitcoin is most likely to drop to $34,000 and our prediction has eventually turned out to be correct. The price broke the local support level of $37,000 and went down by another $3,000 amidst the triggering of stop-losses. This resulted in $2 billion liquidations, which is a significant profit for market makers received from the loss of liquidity.

The weekly candle closed at $36,244 which is a very bad sign for bulls, as the head and shoulders pattern has formed on the chart signaling for reversal. Moreover, this pattern has been forming for quite a long time and has finally taken a global structure. We can assume that this means a transition to an overall bear market.

Meanwhile, we note the fact that this fall is not yet culminating. Most likely, this week we will see another cycle of decline by about 15% – 20% to $29,000 – $31,000, the last significant support level for Bitcoin where we expect to see a strong rebound due to an influx of buyers to the market.

As for altcoins, this scenario will have even more negative consequences. The capital will continue to migrate from altcoins to stablecoins, only exacerbating the market crash. This means that Bitcoin will outperform other cryptocurrencies.