The collapse of Bitcoin pulled along with altcoins, which fell by almost the same amount. The crypto market was in real chaos this week.

The reason for this was Elon Musk. Earlier this week, he announced that his Tesla company would no longer sell cars for Bitcoin due to unecological mining. As a result, Bitcoin dropped to $50,000. Immediately after that, he posted a poll on Twitter on whether to add the purchase of cars with Dogecoin. This idea was supported by 78% of all voting participants.

As a reminder, Musk has been talking about Dogecoin for a long time and is even working with a team of programmers to improve the network of this cryptocurrency. According to current estimates, Musk is believed to own 28% of all DOGEs issued. Moreover, he recently said that Dogecoin is a better cryptocurrency than Bitcoin, as it is faster and cheaper.

Additionally, Elon Musk announced that his other company, SpaceX, will launch a rocket to the moon called Doge-1. According to him, this mission will be fully paid for with proceeds from the sale of Dogecoin. This announcement further shattered the entire market.

Against the background of the success of Dogecoin, which grew to $0.75, many other meme coins began to appear on the market that copied Dogecoin – SHIBA INU, Akita, Dogelon. Their capitalization within a few days and weeks grew to billions of dollars.

Especially interesting is the fact that the community of these meme coins decided to send a huge part to Vitalik Buterin. The Ethereum founder did not spend them for personal gain and donated them completely to charities in the amount of $1.4 billion. This dropped the price of Shiba Inu by 50%, the rest of the coins fell even more.

Amid these events, fees on the Ethereum network jumped to $60 despite the fall in the price of ETH. This is the network’s anti-record. This was influenced by meme-coins that were made on the Ethereum blockchain and became wildly popular and overloaded the network.

At the same time, the difficulty of the Bitcoin network only jumped 21%. As a result, this indicator has reached a new all-time high.

The market has been very hectic this week with news pouring in almost every hour. All this played a cruel joke against Bitcoin. But at the same time, Microstrategy again bought $15 million worth of Bitcoin. Note that they are constantly buying Bitcoin on corrections.

Let’s take a look at the Bitcoin price chart and try to figure out what to expect from it this week: 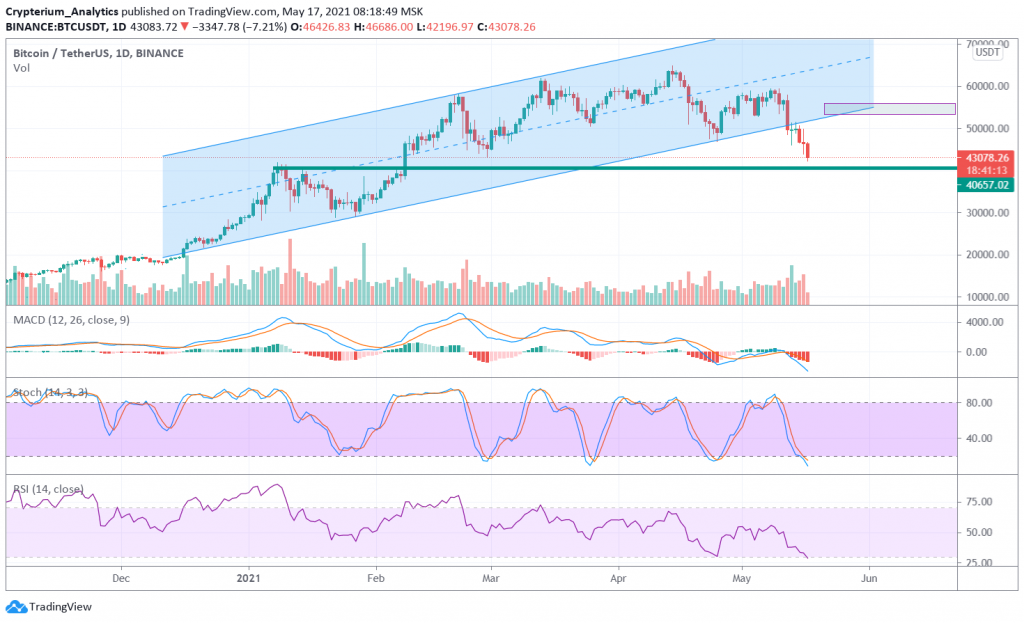 Bitcoin has fallen out of the ascending channel and is steadily moving down. The trading volume has grown slightly and now stands at about $70 billion per day. Together with the price, the dominance of Bitcoin is falling, which has reached 40%.

All indicators have dropped significantly. RSI and Stochastic went down to the lower border and continue to fall. MACD has turned down and will also decline, widening the gap between the moving averages.

In general, there is real panic in the market. Market participants are closing their positions and expecting a further decline. In just a week, over $7 billion was liquidated, of which $5 billion fell on May 12th and 16th. All this points to the weakness of buyers in the past week. If you decide to fix your position, send funds directly to your bank card in seconds using the Crypterium Wallet.

It is now highly likely that the chart will go down to the $40,000 – $42,000 range. In this area, positions can be consolidated and accumulated, after which the price can rebound upwards. A rebound may occur before the end of May to the $53,000 area and this will be a retest. At these levels, it will become clear whether there will be a new rise in Bitcoin.