Last week, the price of Bitcoin fell by almost 6% and is still hovering around $40,000. At the same time, altcoins followed Bitcoin but declined a little less, which is indicated by the altcoin dominance chart.

The loudest news of this week concerned Elon Musk and Twitter. The world’s richest person according to Forbes offered to buy Twitter for $43 billion, which is 20% more expensive than the market value of the social network. Elon Musk said he wanted to turn Twitter into “an arena of true free speech” with no attempts to make money on this deal. The company’s shareholders have already rejected this offer and have introduced measures to dilute the share of Elon Musk in case he starts buying shares available on the market. Also, Elon Musk has previously stated that he wants to add the Dogecoin cryptocurrency to the Twitter platform.

The non-profit organization Luna Foundation Group (LFG) keeps acquiring Bitcoin. So, last Monday, it became known that this company got $176 million in Bitcoin, two days later – $100 million, and on Friday – another $5 million. Thus, they have 42,530 Bitcoins currently in stash, which totals $1.72 billion. Recall that these funds are collateral for the UST stablecoin.

The Ethereum development team conducted a “shadow fork” of the main network. This was necessary for stress testing of merging blockchains on the PoW and PoS consensus algorithm. One of the main developers of Ethereum, Tim Beiko, claimed that the result was extremely positive. He also said that the transition to Ethereum 2.0 would take place by the end of this summer. In addition, he warned against investing in mining and urged not to buy new equipment.

The $10 trillion investment firm Black Rock announced that it was actively exploring cryptocurrencies, blockchain, stablecoins, and tokenization opportunities in the light of requests from the company’s customers. In addition, they plan to become “a primary asset manager” of Circle’s USDC cash reserves. After that, it became known that Circle intends to apply for the US crypto bank license and raise $400 million from the largest US investment funds.

Meta Corporation has begun implementing monetization to its own metaverse. It became known that the company’s commission charged from sales will be 47.5%. Most of this revenue will go to developing applications related to virtual reality headsets. According to the Meta strategy, users of their metaverse will earn through the sale of NFTs and digital services.

It became known that the largest hack in the crypto industry, the attack on the Ronin blockchain that resulted in $625 million losses, was carried out by North Korean hacker group Lazarus. Part of the funds was sent to the Tornado Cash mixing service which further announced that it would block sub-authority addresses at the frontend level. This means that it will be possible to use their services directly through smart contracts.

Against the backdrop of this news, the Bitcoin price slowly declined. Let’s take a look at the BTC chart and try to figure out what direction the price will move this week: 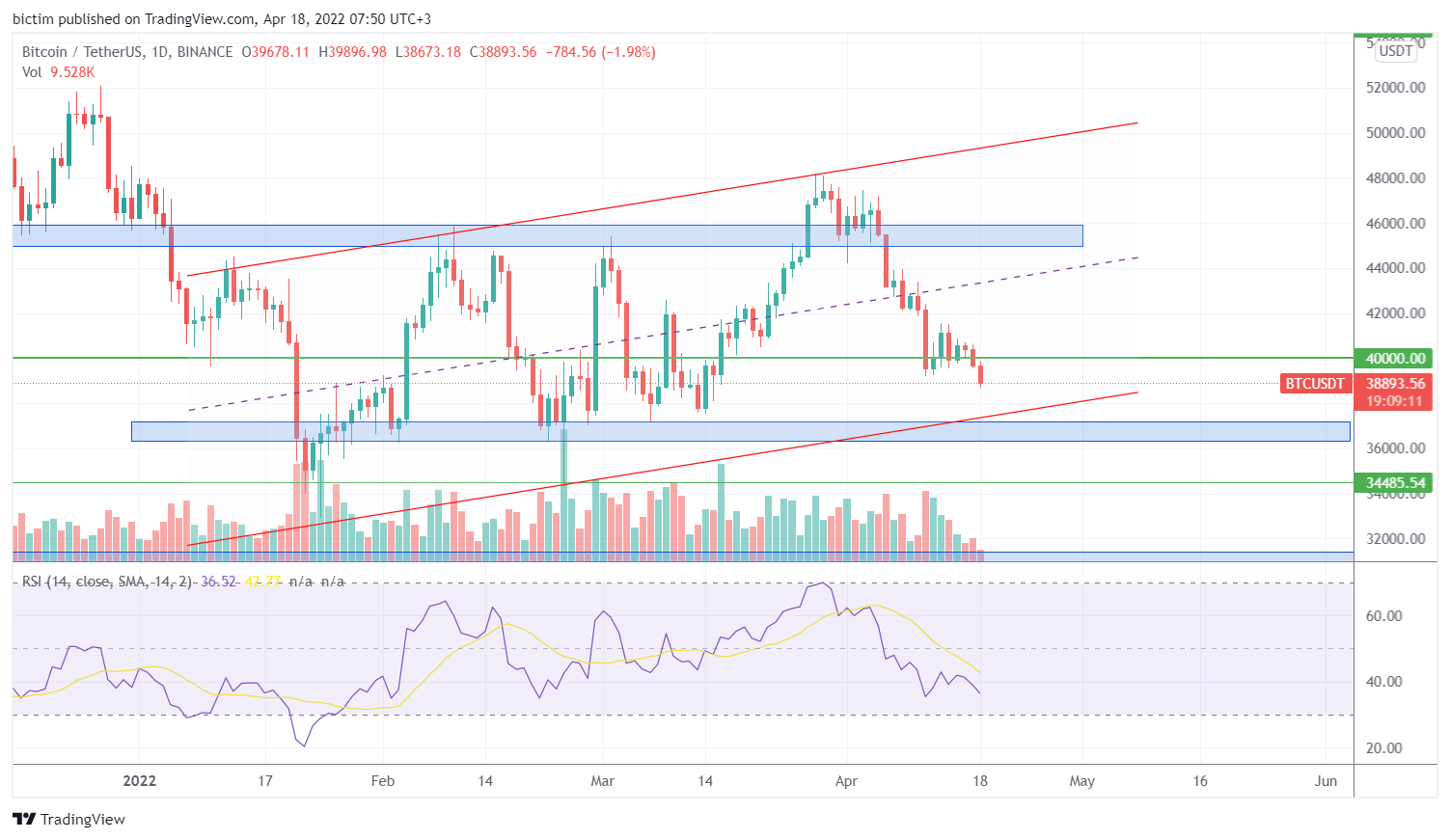 For the last 3 weeks, Bitcoin has been moving within a local downtrend. Meanwhile, the chart has not left a three-month ascending channel. The price is approaching the lower border, which comes near $37,300. We expect to see Bitcoin dropping to this mark and this is where the selling climax will occur.

If buyers fail to maintain this level, Bitcoin will most likely fall by 20-25%. This week, it is possible that we may see a short squeeze, as a result of which the price will even reach $34,000 and then go back to the channel again.

We can definitely expect a high volatility in the coming days. In this scenario, the altcoin market will feel even worse. Prices can fluctuate by tens of percent up and down. All this must be taken into account for your risk management when placing stop-loss orders.