Early last week, it was reported on the largest Chinese developer Evergrand’s default. This caused a decline in both cryptocurrency and all other markets. But the very next day it was revealed that this information was false and the company made its monthly payment on the bonds. Nevertheless, the misinformation led to Bitcoin dropping by almost 10%.

But before that happened, the price of the first cryptocurrency had reached a new all-time high of $69,000. Most likely, this was due to high expectations regarding the Bitcoin network update, which took place yesterday. Important features have been added to the Bitcoin code – Schnorr signature and Taproot – that will ensure more efficient data processing on the blockchain and reduce network fees. This is the largest update related to Bitcoin since Segregated Witness (SegWit) was introduced in 2017.

At the same time, the SEC continues to reject applications for spot Bitcoin ETFs. Last week, the regulator refused to accept an application from VanEck and CBOE, which was filed in March 2021. The SEC postponed their decision several times and kept studying public opinion. But this time, the answer is final and ETFs will not be considered legal.

At the same time, the largest cinema chain AMC Theaters added support for cryptocurrencies to its services. Users will be able to make online payments using Bitcoin, Bitcoin Cash, Ethereum and Litecoin. The company also plans to integrate Dogecoin in the near future.

There were a lot of rumors about Discord. The platform’s director tweeted a picture showing the Ethereum network embedded into it along with the Metamask and WalletConnect wallets. Moreover, he also hinted at the possible integration of Ether and got mostly negative feedback on his messages. As a result, he deleted his tweets and said that Discord made no efforts to add Ethereum to its ecosystem.

All of these events have had a significant impact on the cryptocurrency market. As a result, we saw high volatility affecting a range of coins. Let’s take a look at the Bitcoin chart afterward and try to figure out what to expect from its price in the coming week: 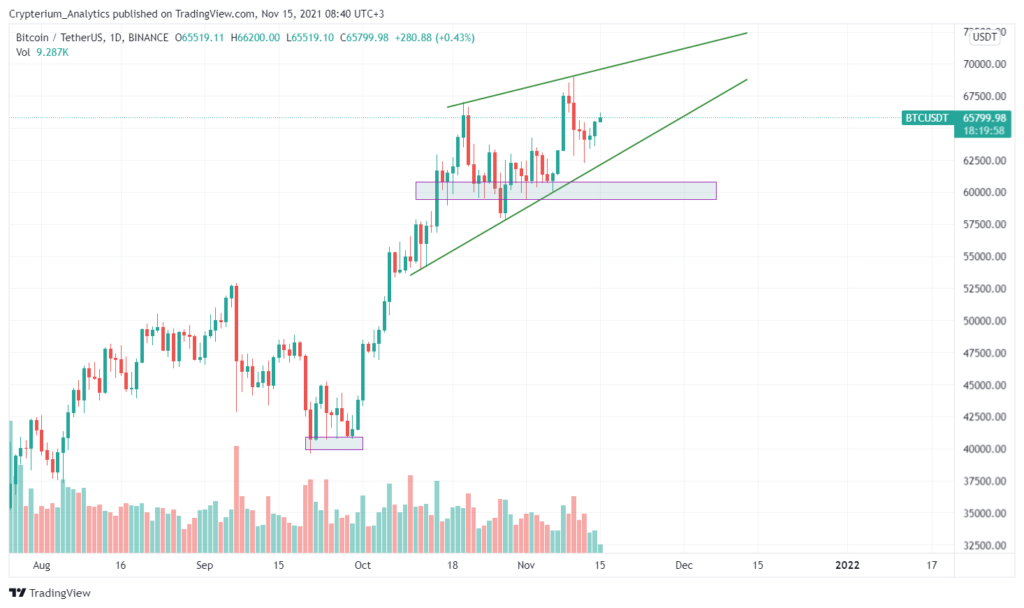 Last week, the Bitcoin chart finally demonstrated the “rising wedge” pattern and now the cryptocurrency is moving inside it. The price almost reached the lower border and then the trajectory turned up. Most likely, Bitcoin will move towards the upper boundary of the wedge. In this case, the BTC price may settle at the $70,000 – $71,000 level within a week.

The overall situation looks good on the weekly chart, as well. Candlestick patterns indicate that the price may reach $69,000 again and rise even higher to the $70,300 area. In addition, the Bitcoin dominance stopped falling last week and began to grow. This is also a positive sign for the first cryptocurrency, so the subsequent growth is expected to continue.

However, you need to closely monitor the market near the $70,000 mark and possibly sell your position because, in this area, we can see a strong selling pressure, which often fixes positions near flat levels.