Crypto Weekly: Launch of Bitcoin ETF and BTC rise to $63,000 The past week was positive for the entire cryptocurrency market. The total market capitalization has grown by 7% and is already $2.5 trillion. At the same time, Bitcoin grew by 11% and exceeded the $60,000 mark for the first time in six months. This rise was facilitated by a large amount of positive news that came out last week.

The most anticipated news was the launch of the Bitcoin ETF, which has been waiting for the last 4 years. On Friday, it was reported that the SEC plans to approve the application from ProShares. These rumors were based on the fact that the SEC did not reject this application on time. Moreover, ETF from ProShares with the ticker BITO appeared in the Bloomberg trading terminal.

No official information has been received from any parties, but the cryptocurrency community is confident that the launch will take place today, Monday, October 18, 2021. The Nasdaq exchange, which announced that it is also ready to launch a Bitcoin ETF from Valkyrie Investments, also provides excitement on the market. As a reminder, 2 ETFs related to cryptocurrency companies have already been approved last week. This could herald the launch of the first ETFs associated with the first cryptocurrency.

In addition, it became known that the Bakkt exchange will issue its shares on the NYSE. Trading will begin on October 18th. Bakkt is launching its shares through a merger with SPAC. In January 2021, this exchange had already announced such plans and was able to implement them in less than a year. As a result of this deal, the company is valued at $2.1 billion.

All of this news caused the price of Bitcoin to rise to $63,000 within a week. This means that the negativity from China has been completely won back. This is also indicated by new data on the distribution of the Bitcoin hashrate. As a result of the outflow of miners from China, the United States came to first place in terms of production with an indicator of 35%, Kazakhstan moved up to the second place (17%), and Russia moved up to the third (11%). It was these countries that became the main directions of migration of Chinese miners, which led to wider decentralization than ever before.

Other notable news came from the two largest crypto exchanges in the world. Binance established a $1 billion fund to develop the Binance Smart Chain ecosystem and all projects on this blockchain have experienced strong growth. In addition, Binance became the official sponsor of the Italian football club Lazio and launched the sale of the club’s fan tokens on its Launchpad platform.

In turn, Coinbase announced that it is going to launch its own NFT marketplace. Users will be able to create, exchange and trade NFT tokens on this site. Initially, the marketplace will support NFT on the Ethereum blockchain but plans to add other blockchains in the future. Coinbase has opened a waiting list and more than 1 million people have signed up already.

The past week turned out to be extremely positive for Bitcoin, which led to its significant growth. Let’s take a look at the chart and try to guess in which direction the price might go this week: 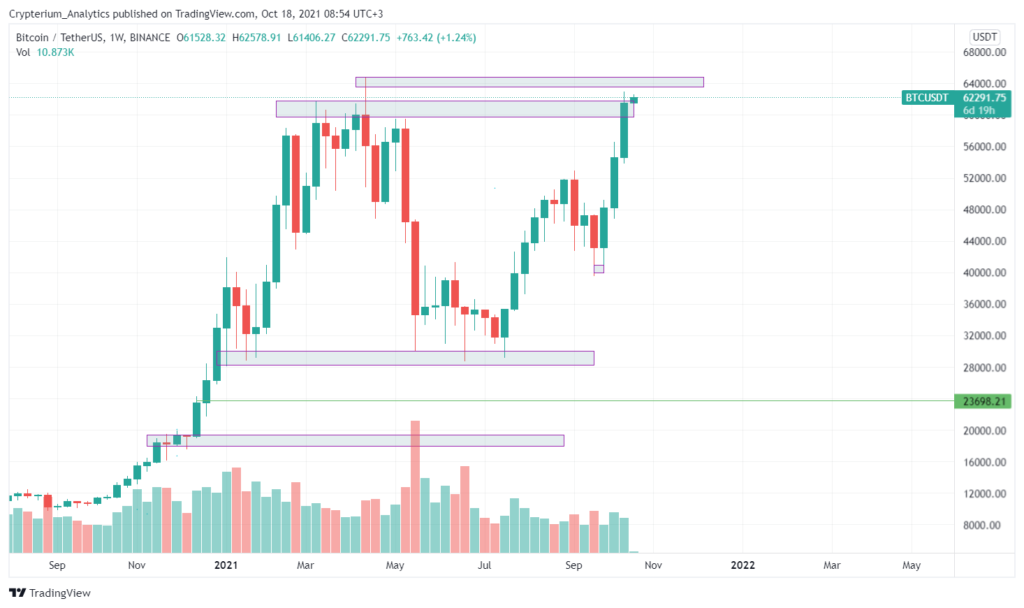 The weekly candle on the Bitcoin chart closed with great force. The price was able to overcome the largest resistance level and consolidated above it. At the same time, trading volumes indicate low activity. It is quite obvious that new people are not coming to the cryptocurrency market right now. However, all this can change dramatically after the launch of the above ETF.

The chart has a fairly strong structure at the moment. We do not see any strong signals for a decline. Based on this and a lot of positive news, we expect to see Bitcoin’s ATH update this week.